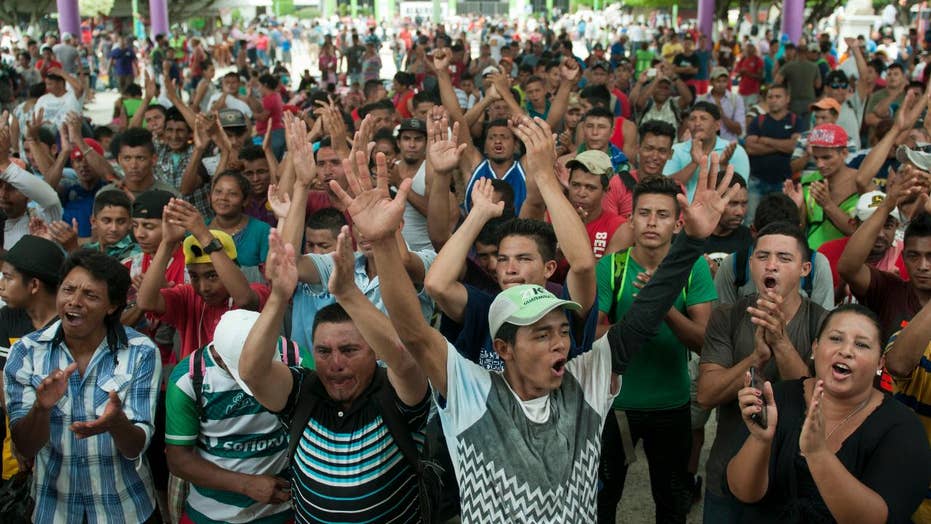 Jonathan Wachtel, former Director of Communications and spokesperson at the United States Mission to the United Nations joins Fox Report to discuss the migrant caravan en route to the U.S.

A large caravan of Central American migrants started marching toward the Mexican city of Tapachula at dawn Sunday with an escort of federal police as other law enforcement units moved back their lines, taking up a position a few miles north.

The procession was on the move after a night in which hundreds of immigrants grew frustrated with the pace of processing by Mexican officials and swarmed the Suchiate River, swimming, floating and pulling themselves across the muddy waters to reach the U.S.

The river separating Guatemala and Mexico is the primary crossing point for tens of thousands of Central American immigrants who migrate north each year looking for work and a better life in America. Saturday night, however, when the sun went down, the river banks came alive, with hundreds of young Honduran men breaching the river to the chorus of fellow countrymen cheering them when they reached Mexican soil. Police made no attempt to intervene.

The caravan, numbering anywhere from 5,000 to 10,000, is composed of young, unemployed men, women with children, some families and unaccompanied juveniles. Most are from Honduras.

Mexico is currently processing the caravan in small groups, with mostly women and small children first to avoid dehydration in the blistering heat. The line stretches across a long bridge back to Guatemala and along the river banks where some members sang the Honduran national anthem.

According to those we interviewed, who said they would sleep Saturday night not in shelters but in the city square or nearby banana groves – and wait for their comrades to cross before continuing their trek to the U.S.

Mexican officials say some 5,100 to 7,200 migrants registered to stay in the shelters of Cuidad Hidalgo, with another 2,000 chose to camp in the town square. Earlier in the day, the Mexican government estimated 2,000 remained in Guatemala.

Mexico says some 640 asylum claims have been processed since Friday.  Many other immigrants waded across the Suchiate guided by a tow rope or took one of dozens of rafts that ply these waters daily. Mexico said “900” arrived in such “unauthorized means.”

Mexico deployed some 700 federal police to the border. Some controlled the human traffic on top of the bridge, but appear indifferent to the individuals crossing below.

The bridge lacks any facilities, food or water. It smelled of urine and rotting trash. Those who left lost their place in line. Once into Mexico, the migrants received water and medical care in a nearby warehouse. Many arrived with nothing but the shirt on their back.

What happens next is unclear, but the consequences present challenges for both the U.S. and Mexico. The young men we spoke to said the caravan would resume moving north to the U.S. after everyone was off the bridge. An organizer for Pueblos Sin Frontiers said they could leave in the next few days.

Mexico says it will police its border against rogue caravan members who try to cross illegally, although evidence suggests otherwise. Those without passports or visas, officials say, will be deported unless they want to claim refugee status as asylum seekers. The border state of Chiapas has agreed to open seven shelters to handle the caseload.

Mexico also says it asked for help from the United Nations refugee agency, UNHCR. A spokesman for the group says it will use the same international criteria used to adjudicate caravan claims as, say, Syrian refugees in Turkey, namely a “well-founded fear of persecution because of race, religion, nationality, social group or political opinion.”

Notably, it does not include unemployment, crime or domestic violence. Using the UN standard, experts say the majority of caravan members should not qualify for asylum status.

UNHCR spokesman Chris McGrath confirmed Saturday the agency has “deployed teams to the Mexican border with Guatemala where they are working closely with Mexican officials . . . so all individuals can be processed and provided with essential services, including access to health services, food and shelter.”

The asylum process can take from 45 to 90 days. Those who are approved will be eligible for relocation in a third country, potentially Mexico or the United States, but there are no guarantees. A Salvadoran family with relatives in Chicago will not automatically be placed in the U.S.

During the lengthy asylum process, applicants are supposed to remain near an immigration station and sign in each week. Once granted, they can move freely in Mexico. Last year, roughly 9,000 Central Americans received asylum in Mexico but the system is severely backlogged.

If their asylum claim is denied, Mexico says they will be deported, which presents a major problem for thousands of immigrants lined up here.

Unlike in April, when a similar caravan moved through Mexico with the government’s approval, the Mexican ambassador to Guatemala said Thursday Mexico will not issue transit visas, meaning if immigrants are caught wandering around Mexico, they will be deported.

What is obvious, but so far unaddressed, is a problem that has plagued this area for decades. Most migrants will not wait for their claim to be adjudicated and simply leave, especially the single men who know they have no legitimate asylum case. They are likely to break off and either attempt to enter the U.S. illegally as individuals or reconstitute as a caravan moves north of Mexico City.

What the U.S. and Mexico do then is also unanswered. Reportedly, the two countries have reached a “safe third country agreement,” which allows the U.S. to deport to Mexico any Central American who has not already applied for asylum status in Mexico.

This has never been done before. Currently, the U.S. must accept and provide due process to any asylum-seeking Central American and, because of a two-year backlog in the courts and several judicial rulings, most are released while some 98 percent are never deported, according to U.S. officials.

The deal, if finalized, would be a blessing for the Trump administration, which has been unable to get a handle on illegal immigration despite a campaign pledge to do so. For Mexico, however, it presents problems.

Mexico fears Central Americans turned away from U.S. ports of entry will overwhelm already stressed food banks and shelters in border cities like Tijuana, Nogales and Juarez, creating immigrant ghettos of crime and desperation, with migrants unable to move north and with no money to return home.

U.S. officials acknowledge the concern, but also say the U.S. needs to send a message. Central America’s population tops 45 million. The average wage is about $20 a day; for unskilled labor it is less than $5. Some 70 percent of families live in poverty. A recent drought in Honduras and falling coffee prices hurt even more. Immigrants say the county lacks jobs, safety or a future. U.S. officials argue that unless immigrants understand they cannot enter the U.S. at will and land a job, more caravans will come and illegal immigration will continue.

As to the reported “safe country” agreement, a senior State Department spokesperson for Western Hemisphere Affairs said only this, “We welcome the Government of Mexico’s statement they will seek support from UNHCR to address immigration issues in the region, including the influx of people arriving in Mexico.”

The deteriorating conditions in Central America present a problem for both the U.S. and Mexico, who fear the unlimited pipeline of low skilled labor will take jobs from domestic residents and will drive down wages, as they compete for jobs with native-born workers trying to climb the economic ladder.

Mexico actually deports more Central Americans than the U.S. From January to August, Mexico deported 69,929 immigrants, a 40 percent increase over the same period last year. The U.S. took in 107,000 Central American families last fiscal year, more than ever before and the vast majority stayed, along with a record number of unaccompanied children.

One reason for the lack of clarity on policy: Mexico’s government is about to undergo a potentially radical transition.

The administration of new President Andres Manuel Lopez Obrador takes over in December.

In campaigning, Obrador took a much softer, sympathetic approach to immigration from Guatemala, El Salvador and Honduras. Responding to the caravan, Obrador promised to find the immigrants jobs.

U.S. officials have been sensitive to the change, trying to include the incoming administration in talks while also trying to cement details before ALMO takes charge. President Trump’s conciliatory remarks toward Mexico may help, not backing Lopez Obrador into a corner by stoking a negative public opinion.

President Trump has threatened to call in the U.S. military to stop the migrants and close the U.S./Mexico border in retaliation. That happened once before after the cartel murder of U.S. DEA Agent Kiki Camarena. The effect was chaos, and Mexico immediately coughed up the suspected killer. Today $1 million of commerce crosses the border every minute, along with nearly a million cars and pedestrians.

Many predict the caravan will diminish in number but not disappear. With the midterm election just two weeks away, their trek north could provide a potent political argument for both sides as American voters decide which party can best untangle the immigration knot.