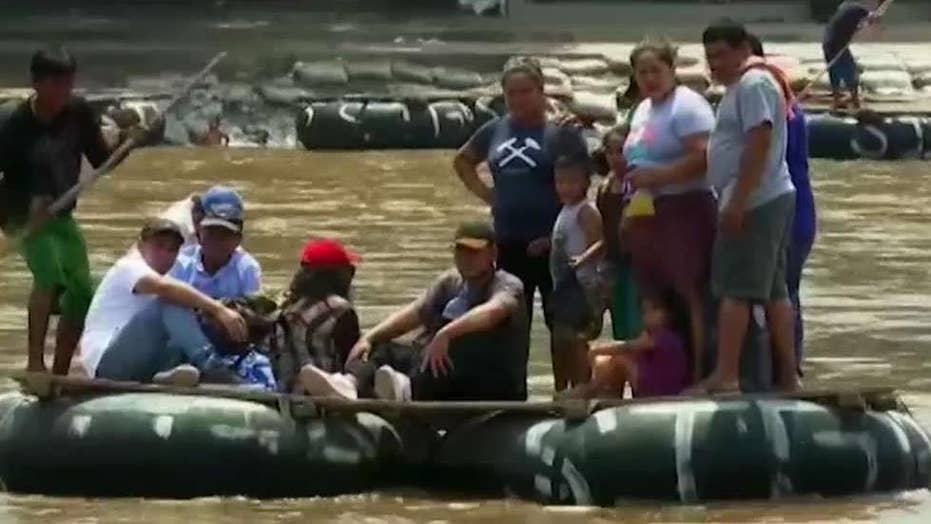 Mexico steps up enforcement along Guatemala border; William La Jeunesse has the details.

The Mexican government has dispatched approximately 15,000 troops and National Guard officers to the U.S. border in a bid to check the flow of migration from Central America, the country's defense chief told reporters Monday.

Mexico promised earlier this month to send 6,500 National Guard agents to its southern border, but Monday's announcement was the first public acknowledgment of deployments to the U.S. border.

At a news conference in the Caribbean city of Cancun, Defense Secretary Luis Cresencio Sandoval said Mexican forces were detaining migrants to prevent them from crossing the U.S. border. Mexican security forces previously have detained migrants traveling within Mexico but had not stopped them from crossing into the United States.

Mexico deporting migrants without papers at checkpoints on Guatemala border

6,000 Mexican troops have been deployed to choke points on the border with Guatemala to thin out the number of migrants trying to reach the U.S.; William La Jeunesse reports from the scene.

"Given that migration is not a crime but rather an administrative violation, we simply detain them and turn them over to the [Mexican immigration] authorities," said Sandoval, as the AFP news agency reported.

Mexican officials also said Monday that the border city of Nuevo Laredo was expected to start receiving migrants returned from the United States as early as this week. Under the terms of an agreement between Washington and Mexico City to expand the so-called "remain in Mexico" program, asylum seekers are to wait on the Mexican side of the border while their claims make their way through U.S. courts.

Nuevo Laredo could receive up to 150-200 asylum seekers daily beginning Friday, though local officials said Mexico's government has not yet confirmed how many the city will be receiving.

Previous rollouts of the program at two points along the California-Mexico border and at Ciudad Juarez-El Paso on the Texas border began in small numbers and gradually increased.

Mexico releases full text of immigration deal with US

"It is a humanitarian issue that we will be attending to within the measure of our capacities," Nuevo Laredo Mayor Enrique Rivas told The Associated Press. "The federal government must take responsibility for being the ones who took this decision (to accept the program's expansion). We will continue knocking on doors to find resources. The municipal government is overwhelmed."

Rivas and Deputy Mayor Raúl Cárdenas Thomae said Nuevo Laredo's shelters already have been overflowing with some 3,000 migrants. The city was studying the possibility of opening another shelter to accommodate the returnees, they said.

Thomae said Nuevo Laredo would be receiving those returned across a stretch of border about 260 miles long from Roma, Texas, to Ciudad Acuna, in the state of Coahuila.

There have been more than 14,000 returns by migrants to Mexico under the program since it launched in January, according to the most recent figures available from the Mexican government.