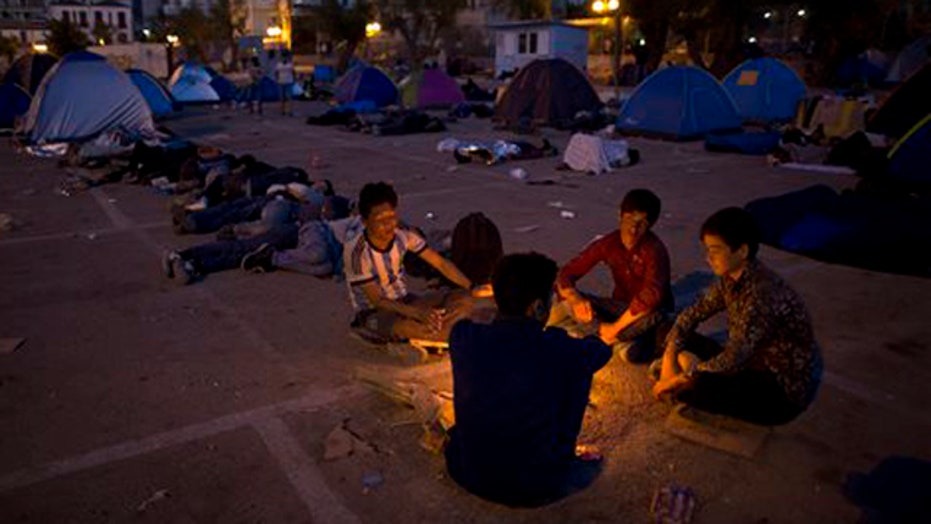 BERLIN – Germany's plan to take in 500,000 Middle East refugees per year is being hailed as humanitarian around the world, but uneasy critics inside the European power fear the huge influx could not only skew the nation’s demographics in a hurry, but could also include terrorists hiding among the war weary masses.

Chancellor Angela Merkel's pledge to welcome more of the tide of refugees pouring into Europe than any other nation comes as a massive wave of mostly Muslims pours in from the Middle East via Eastern Europe. Hundreds of thousands, many from war-torn Syria, are fleeing sectarian violence and cratered economies looking to start new lives in the west. But ISIS has already said it planted jihadist fighters among the refugees, and some in Germany wonder why the terrorist army's claims are not being taken more seriously.

“It is a theoretical possibility that cannot be ruled out for terrorist organizations to infiltrate as members of asylum seekers," Markus Schaefert, spokesman for Bavaria’s Office for the Protection of the Constitution (the equivalent of the FBI), told FoxNews.com.

“It is a theoretical possibility that cannot be ruled out for terrorist organizations to infiltrate as members of asylum seekers."

However,  Schäfert said “as of now there are no definitive indications that jihadists are using the flow of traveling refugees through Munich into  federal territory purposefully as an entry travel way.”

Yet reports shows signs of lurking terrorism. According to the Die Welt paper on Tuesday, a spokesman for the intelligence agency in the west German state of North Rhine-Westphalia said, “Salafists have, in individual cases, attempted, with the pretext of offers of help, to establish contact with the refugees.” Members of Germany’s growing Salafist movement have travelled to Iraq and Syria to fight for Al Qaeda and Islamic State.

The German mass circulation Bild am Sonntag  paper wrote last year, “In view of the chaotic conditions on the Syria-Turkey border, it is nearly impossible to catch ISIS-terrorists in the wave of refugees.“

Refugees arrive at the main station in Munich last week after Austria and Germany threw open their borders to thousands bused to the Hungarian border by a right-wing government that had tried to stop them but was overwhelmed by the sheer numbers. (Reuters)

The paper added that U.S. officials succeeded in decoding locked communications of the ISIS leadership ”revealing Islamic State terrorists cannot use airports on their way to Europe because of the strict control." But slipping in among the train cars laden with refugees would not be difficult, authorities acknowledge. A Syrian Islamic State smuggler recently claimed more than 4,000 Islamic State combatants disguised as refugees have entered the 28-member European Union.

Whether the threat is real, exaggerated or nonexistent, it has struck fear in Germany and throughout Europe.

“Islamist terrorists, disguised as refugees, have showed up in Europe," a report on Hungary's M1 television news said on Tuesday. "Many, who are now illegal immigrants, fought alongside Islamic State before.”

Earlier this year, Islamic State spokesman Mohammed al-Adani said:  “We repeat our call to Muslims in Europe, the infidel West, and everywhere to target the Crusaders in their home countries and wherever they find them.”

In addition to native Middle Eastern fighters, the wave of refugees could also provide cover to Europeans who went to fight for ISIS and have since been barred from returning home. Hundreds have already sneaked back, and experts say the crush of humanity is so vast that more could easily be on the way.

According to German authorities, 700 German jihadists have fought or are engaged in combat in the Syrian and Iraq war theaters. A third of the fighters—250—have returned to Germany. There are nearly 600 investigations targeting more than 800 people in Germany for illicit activity on behalf of Islamic terrorist groups.

With the massive influx of largely Middle Eastern male refugees into Germany, a growing clash of the cultures may be underway. At a news conference last week, Merkel fielded a startlingly blunt query from an unidentified member of the public.

“Ms. Federal Chancellor, how do you plan to protect our culture from the Islamization?”

For her part, Merkel has answered such concerns by urging Germans not to let fear drive the nation's immigration policy. But that stance is at odds with her prior rhetoric, including a 2010 declaration that, "the approach [to build] a multicultural [society] and to live side-by-side and to enjoy each other... has failed, utterly failed."

Roughly 4 million, or five percent of Germany's population of 80 million, are Muslim.

Merkel's critics include leaders of her coalition partner in the federal government, the Bavarian-based Christian Social Union party. CSU Interior Minister Joachin Hermann said the immigration policies of Merkel send a “totally false signal within Europe,” and the party's general secretary, Andreas Scheuer, said the leadership of the party was “completely right. The mass influx of refugees to Germany must be stopped.”

Merkel is dependent on the CSU for her governing coalition. Hence a collapse of her government is possible if she fails to placate the rising anger within the CSU.

While the photographs of Austrians and Germans welcoming Syria refugees show a celebratory mood, there are signs of disapproval among Germans living in the East, the former states of the socialist German Democratic Republic.

In a German public television ARD survey last week, 46 percent of the East German population have fears about the new wave of refugees. Nationally, 59 percent of Germans said they do not have concerns about the refugee influx.

The former head of the Evangelical Church in Germany Margot Kaessmann played down the concerns of Germans about an Islamiziation of Germany.

"I have to laugh a bit," said Kaessmann, who resigned her post after being arrested for driving while drunk. "I tell them to go to Church and then you needn't have worries about full mosques."

An earlier wave of Syrian refugees in June triggered concerns about young Syrian men being aroused sexually by German school girls in Bavaria. The German daily Die Welt reported that school authorities imposed a dress code on its pupils.

In a letter from supervisory teacher Martin Thalhamme at the Wilhelm-Diess-Gymnasium wrote to parents: "The Syrian citizens are mainly Muslims and speak Arabic. The refugees are marked by their own culture. Because our school is directly next to where they are staying, modest clothing should be adhered to, in order to avoid discrepancies. Revealing tops or blouses, short shorts or miniskirts could lead to misunderstandings.”

Meanwhile, Saudi Arabia, which has refused to accept Syrian refugees, offered to build 200 Mosques in Germany for newly arrived Syrians.