German Chancellor Angela Merkel once again has stressed the 2015 Iran nuclear deal – negotiated with U.N. Security Council members and Germany – as a model for solving the North Korea crisis.

“If our participation in talks is wanted, I will say yes immediately,” Merkel said in an interview published Sunday in the Frankfurter Allgemeine Sonntagszeitung newspaper.

Merkel said a diplomatic solution was the only viable way to resolve the crisis – which has seen North Korea launch a series of missile tests as well as test what it said was a hydrogen bomb.

The actions by North Korea have antagonized the United States and its allies in the Asia-Pacific region. North Korean leader Kim Jong Un has threatened a missile attack on the U.S. territory of Guam and even the U.S. mainland – prompting warnings of retaliation, in the form of economic sanctions and possible military action, from Trump and other U.S. officials.

The U.S. plans to seek a strong resolution Monday from the U.N. Security Council in a bid to convince North Korea to end its provocations and tone down its rhetoric.

Merkel previously raised the possibility of using the Iran deal as a model during a podcast earlier this month, Fox News reported.

The five permanent members of the U.N. Security Council and Germany conducted long-running talks with Iran that led to a 2015 deal for international sanctions to be lifted in exchange for Tehran curbing its nuclear activities. 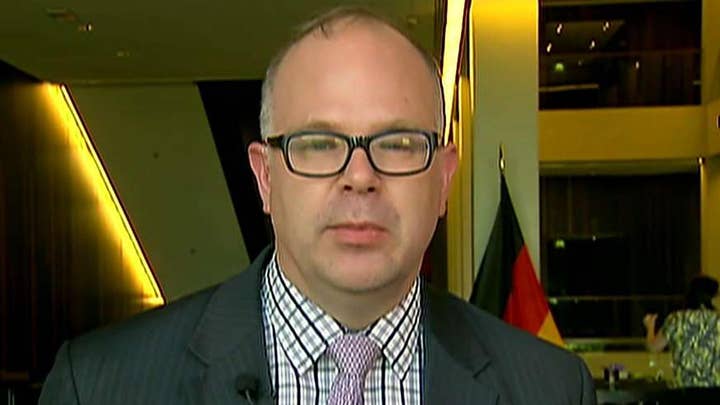 Merkel told the newspaper: "I could also imagine such a format to settle the North Korea conflict."

The chancellor is expected to win a fourth term in office when Germany holds elections Sept. 24 vote, with polls giving her conservatives a double-digit lead over their rival Social Democrats, Reuters reported.