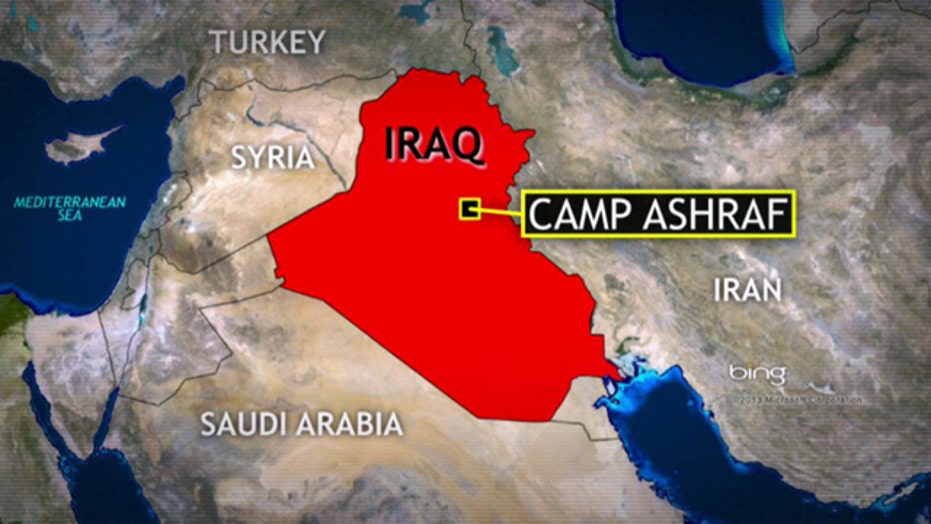 Initially, it was a massacre that much of the world greeted with silence.

While controversy raged about chemical weapons in Syria, in neighboring Iraq 52 Iranians living in an exile camp were killed.  Relatives of the victims say Iraqi-backed forces committed the Sep.1 slaughter. Iraq denies the allegation.

Among the dead was Amir Emadi’s 56 year old father. He says the Iraqis “were there to execute.”

All those targeted were members of an Iranian opposition group called the MEK, which stands for the English equivalent of the People's Army.

The MEK sided with Saddam Hussein during the Iraq-Iran war. Although once considered a terrorist organization by the US,  many security experts now see the MEK in a positive light.

According to former New York mayor Rudy Giuliani,who now runs a private consulting firm, the MEK “is a group that is on our side that is in favor of a democratic Iran.”  He says the MEK has provided intelligence to both Israel and the U.S. about Iran’s nuclear program.

The attack allegedly targeting MEK members took place despite a 2003 commitment from the U.S. that the group would be given protected status under the Geneva conventions. When the U.S. ended its occupation Iraq took responsibility for keeping the group safe.

In addition to those killed, MEK supporters claim 7 people were abducted in the attack and fear they will be returned to Iran and executed. Iraqi officials dismiss the allegation and have pledged to investigate the rampage.

While Iraqis might have been the perpetrators of the assault, Giuliani says blame rests with Tehran. “What  people in the United States should know is that Iraq has become a client state of Iran," he said.

According to Giuliani, “the person running Iraq right now is not (Prime Minister) Maliki, it is the Ayatollah. It is a Shiite axis that has been formed.”

Relatives of those killed believe the U.S. should be doing more to protect the nearly 3,000 MEK members still living in Iraq. Emadi says the best solution would be allowing them to relocate.  "We want to make sure they are in either Europe or the United States… that they have the freedom to live a normal life."

Giuliani says the Obama administration should offer MEK members asylum, but fears Washington will not take up the cause, fearing it would destroy efforts to negotiate the future of Iran’s nuclear program with the country’s newly elected President Hassan Rouhanni, who will speak at the U.N. next week.

He adds,“these people  shouldn’t be slaughtered because they are too inconvenient  to be hanging around when the Iranians are getting ready to fool us over whether or not they are really stopping their nuclear plans.”