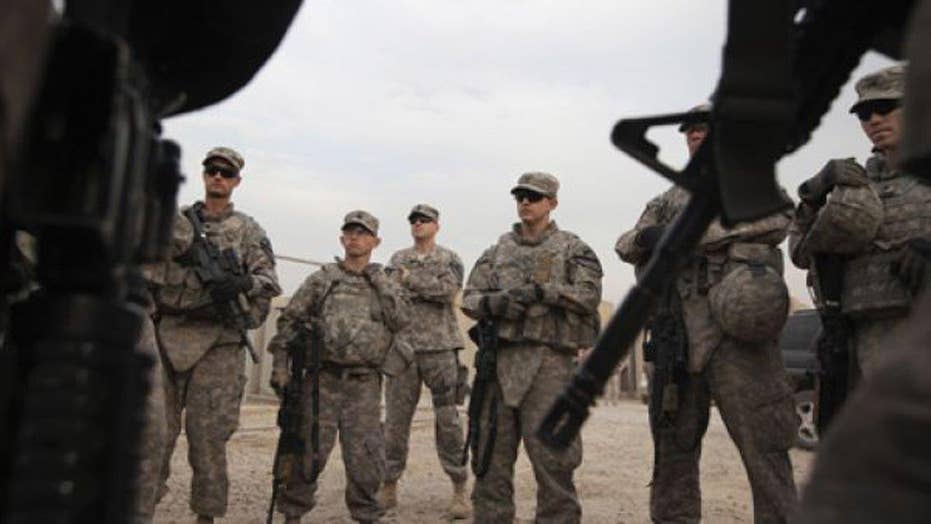 Boots on the ground? Pentagon to send more US forces to Iraq

A senior U.S. official said the Marines fired illumination rounds to help the Iraqi forces locate IS fighters, and also fired artillery rounds in support of the operation, as Iraqi troops took control of several villages on the outskirts of Makhmour, southeast of Mosul. The official was not authorized to discuss the operation publicly and requested anonymity.

Earlier this week, U.S. military officials confirmed the creation of the Marine outpost, dubbed Fire Base Bell. It's the first such base established by the U.S. since it returned forces to Iraq in 2014. But they insisted that the nearly 200 Marines were only there to provide security for Iraqi forces and U.S. advisers at the nearby Iraqi base in Makhmour.

A second U.S. official on Thursday said the Marines provided the artillery fire in response to a request from the Iraqi government and that U.S. leaders don't believe this to be an expanded combat mission. The official, who was not authorized to discuss the operation publicly so spoke on condition of anonymity, said it was considered expanded support for the Iraqis.

Army Col. Steve Warren, a spokesman for the U.S. military headquarters in Baghdad, told Pentagon reporters on Monday that Fire Base Bell should not be considered a combat outpost because it is located behind the front lines and is not initiating combat with the militants.

On Thursday, however, the use of illumination rounds and artillery to support the forward advance of the Iraqi troops appeared to expand the Marines' role from purely security to more direct combat action, although the Marines were not on the front lines with the Iraqis.

The White House has ruled out a ground combat role for the U.S. in Iraq, and is intent on avoiding the appearance of any expansion in military operations there — more than four years after President Barack Obama pulled U.S. troops out of the country.

So officials have been walking a fine line as they describe the operations of the Marine artillery unit, insisting everything is related to "force protection" of the Iraqi and U.S. forces at the Makhmour base.

The key difference Thursday was that the Marines were not firing artillery to protect Iraqis and U.S. advisers at the base but were helping the Iraqis in an offensive operation against the Islamic State militants.

Defense Secretary Ash Carter has said the U.S. is looking at a number of options to "accelerate" the fight against IS. Those options are still under discussion in the Pentagon and have not yet officially been submitted to the White House for approval. The range of options could include sending additional U.S. forces to Iraq, using Apache helicopters for combat missions, deploying more U.S. special operations forces or using American military advisers in Iraqi units closer to the front lines.

The White House has capped the number of U.S. forces in Iraq at about 3,870, but that total doesn't include as many as 1,000 troops who are there but exempt because of the military's personnel accounting system. For example, troops sent to Iraq for temporary, short-term assignments are exempt.

The Marines at Fire Base Bell are part of the 26th Marine Expeditionary Unit, which has been based on the USS Kearsarge, an amphibious assault ship that has been deployed in the region.

Their movement into Iraq comes as the Iraqi forces formally begin their push to retake Mosul.

Brig. Gen. Yahya Rasool, spokesman for Iraq's Joint Military Command, announced Thursday that the Iraqi forces had launched their campaign for Mosul. But U.S. officials have described it more as early operations that are aimed at clearing a path and eventually setting the stage for a Mosul offensive.

It's not clear how long it would take to recapture Mosul. U.S. military and defense leaders have declined to say when the actual move to retake the city will begin or if the IS militants could be ousted from the Mosul by the end of the year. The U.S. has said it will take many months to prepare Iraqi forces for such a long and complicated offensive.