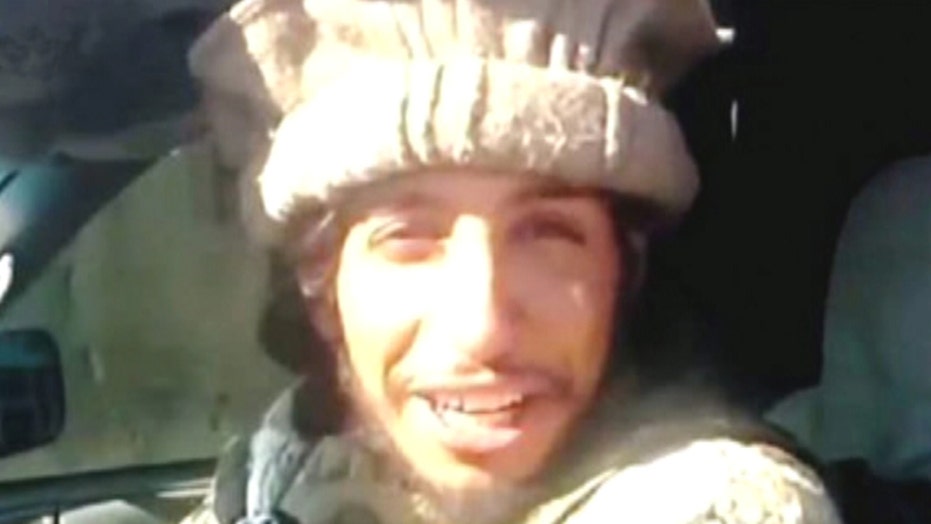 Belgian believed to be behind Paris attacks

DEVELOPING -- As the manhunt unfolded for a suspect in the Paris massacre Monday, his surviving brother said he had no idea where the fugitive was hiding.

Police were seeking the suspected attacker Salah Abdeslam, 26, and any possible associates. Officers set off explosions in Molenbeek, a suburb of Brussels, Belgium, but they say they failed to make any arrests Monday.

"My parents are in shock and don't realize what happened," Abdeslam's brother, Mohamed, told reporters. He added, "We don't know, because of the current tensions, if he will dare to turn himself in."

Mohamed Abdeslam was detained over the weekend and then released, according to his attorney. She told the RTL network her client "hadn't made the same life choices."

A third brother, Brahim, killed himself in Friday's string of attacks. His mother suggested he took part in the suicide bombings because of "stress," The Daily Telegraph reported.

Dozens of masked and heavily armed security officials had sealed off the area in Molenbeek and neighbors were told to stay out of harm's way. Mayor Francoise Schepmans said the operation ended after more than three hours.

In all, five of the seven people who were detained over the weekend because of possible links to the massacre have been released, according to the Belgian federal prosecutor's office. Two others have been charged with being part of a terror group and links to a terror attack, the office said in a statement.

The U.S. and Russia were among the nations rushing to France's aid. French president Francois Hollande announced Monday that he would soon speak with Presidents Barack Obama and Vladimir Putin to discuss pooling their efforts to destroy ISIS. The meeting with Putin could take place later in November, Russian state media reported.

Investigators identified a Belgian jihadist believed to be fighting alongside ISIS in Syria as the suspected mastermind behind Friday's attacks that killed at least 129 people.

A French official told The Associated Press that Abdelhamid Abaaoud, a 27-year-old from Molenbeek, was also believed to have ties to the thwarted attack on a Paris-bound high-speed train this past August, as well as a failed plot to attack a Paris-area church. He is reportedly the child of Moroccan immigrants.

The Telegraph that Abaaoud was the head of a terror cell based in Verviers, Belgium that was broken up by police this past January. However, he appears to have escaped the clutches of the authorities and made his way to Syria.

Salah Abdeslam had been stopped at the French border with Belgium early Saturday, hours after the attacks, The Associated Press reported.

Three French police officials and a top French security official told the news agency that border officers let Abdeslam go after checking his ID. By then, hours had passed since authorities identified Abdeslam as the renter of a Volkswagen Polo that carried hostage takers to the Bataclan, where 89 concert-goers were murdered by terrorists.

Three Kalashnikovs were found inside another car, a Belgian-registered Seat Leon known to have been used in the attacks, in Montreuil, an eastern Parisian suburb, another French police official said.

France launched a series of airstrikes targeting the Syrian city of Raqqa, its biggest campaign in months. Sunday's strikes killed an unspecified number of ISIS fighters but did not kill any civilians, according to the Britain-based Syrian Observatory for Human Rights.

The airstrikes were a central topic at the G20 summit in southern Turkey Monday. Putin said other nations now realize that a joint plan of action represents the only effective means of fighting terror.

He also said the Russian military was in contact with the Syrian opposition, which asked Russia to conduct additional airstrikes. He did not say whether Russia complied, and there was no public response from any Syrian rebel leaders. Western critics have lashed out at Russia for targeting anti-Assad forces not linked to ISIS.

Speaking at the same summit, Canadian prime minister Justin Trudeau said his nation would not change plans to end its anti-ISIS fight.

Twelve French aircraft, including ten fighter jets, dropped 20 bombs on a command and control center, a jihadi recruitment center, munitions depot and ISIS training camp in Raqqa, France's Defense Ministry said in a statement. The U.S. military had shared data with France about ISIS targets inside Raqqa and pledged to broaden cooperation with the French government, a senior defense official told Fox News.

Raqqa is the de facto capital of ISIS' "caliphate."

The U.S. has conducted the vast majority of coalition attacks on ISIS territory up to this point, and has been almost solely responsible for all coalition bombings of ISIS inside Syria. However, the nature of Friday's attacks, which devastated France and shocked the world, changed the calculus.

The scope of the terror threat facing Western Europe became clear as French police uncovered an "arsenal" of weapons as part of 168 pre-dawn raids on suspected Islamists across the country, while France's prime minister warned that "terrorism could strike again in the days or weeks to come."

"I don't want to scare people but to warn them," Manuel Valls told RTL radio. "We will keep living for a long time with the terrorist threat."

Interior Minister Bernard Cazeneuve told reporters that 104 people have been placed under house arrest in the past 48 hours and that 31 weapons had been seized, including a rocket launcher, a flak jacket, and 15 handguns.

Meanwhile, Turkish authorities arrested more than half a dozen suspected Islamic State militants who had exchanged messages with the attackers in Paris, according to a Turkish security official.

That official said that the militants were planning a similar attack in Istanbul, and that one suspect is believed to be associated with Mohammed Emwazi, the Islamic State militant known as "Jihadi John."

Also, German authorities investigated claims that an Algerian man warned fellow migrants last week of an imminent attack in Paris. A spokesman for prosecutors said the unidentified 39-year-old was detained at a refugee shelter in Arnsberg, after he told two Syrian men that Paris would be subjected to "fear and terror."

Norwegian police said the attack led them to postpone a decision to patrol the streets without weapons. They had traditionally been unarmed, but have carried weapons for about a year after the country's security service raised the terror alert level.

And three days after the massacre, the Eiffel Tower lit up again Monday evening, this time in the French flag's colors: red, white and blue. The 116-year-old international symbol of Paris had gone dark after the attacks Friday. It is now back open to tourists.