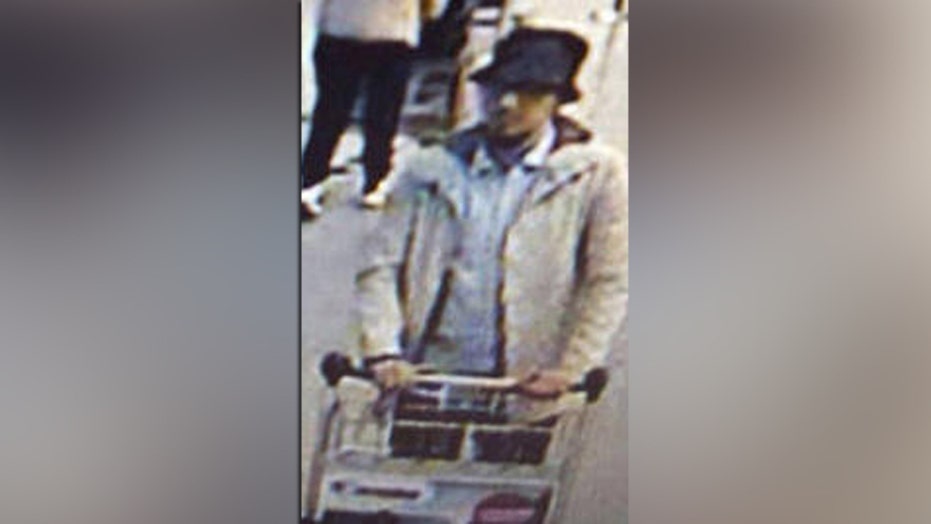 Hunt back on for bombing accomplice after suspect released

A manhunt reignited Monday for the suspected accomplice of two suicide bombers at the Zaventem airport outside Brussels, after officials freed a man previously thought to have been their suspect.

Prosecutors said they lacked evidence to keep Faycal Cheffou in custody. They had charged him with terrorist murder on Saturday.

Investigators also revealed they may have found two gloves belonging to the attackers on a bus that left the airport shortly after the bombings. The right-handed gloves tested positive for bomb residue, U.S. officials told The Wall Street Journal.

A surveillance image taken at the Zaventem airport before the attack. The men believed to be the suicide bombers, on the left, wore gloves on their left hands. (Belgian Federal Police via AP)

Surveillance images showed the two men identified as the suicide bombers wearing gloves on their left hands only. Analysts say they may have hidden the bombs' triggering devices.

U.S. officials told the Journal they were investigating whether the unnamed accomplice dropped the gloves on the bus himself.

Cheffou previously had identified himself as a freelance journalist, The Guardian reports. In one video posted to YouTube in 2014, he appeared in front of a refugee center outside Brussels, and said officials had refused nighttime meals to some Muslim detainees who fasted during the day. He lived just outside the Brussels headquarters of the European Union, the AFP adds.

His release signaled that investigators were still on the hunt for the airport bombing accomplice. Police also released security video Monday showing the unnamed suspect wearing glasses and a white jacket, wheeling a baggage cart through the airport along with the two bombers.

"The police are seeking to identify this man," investigators say. Before Monday, police had released only still images from that video.

The Islamic State terror group claimed responsibility for the attacks.

Meanwhile, Belgium’s health minister said Monday that four of those wounded in the March 22 bombings have died in the hospital, bringing the number of victims to 35.

She posted: "Four patients deceased in hospital. Medical teams did all possible. Total victims: 35. Courage to all the families."

The three charged by an investigating magistrate — identified as Yassine A., Mohamed B. and Aboubaker O. by the federal prosecutors office — were among four people detained during 13 police raids Sunday in Brussels and the northern cities of Mechelen and Duffel.

A fourth person detained was released without charge, the prosecutors' statement said.

On March 22, two suicide bombers blew themselves up at Brussels Airport and a third did the same at a Brussels subway station.

On Tuesday, one week after the bombings, Brussels Airport will test its capacity to partially resume passenger service, an airport official said Monday. But she said it's too early to say when passenger service might actually resume.

Before the bombings, Brussels Airport served some 600 flights a day and 23.5 million passengers per year.