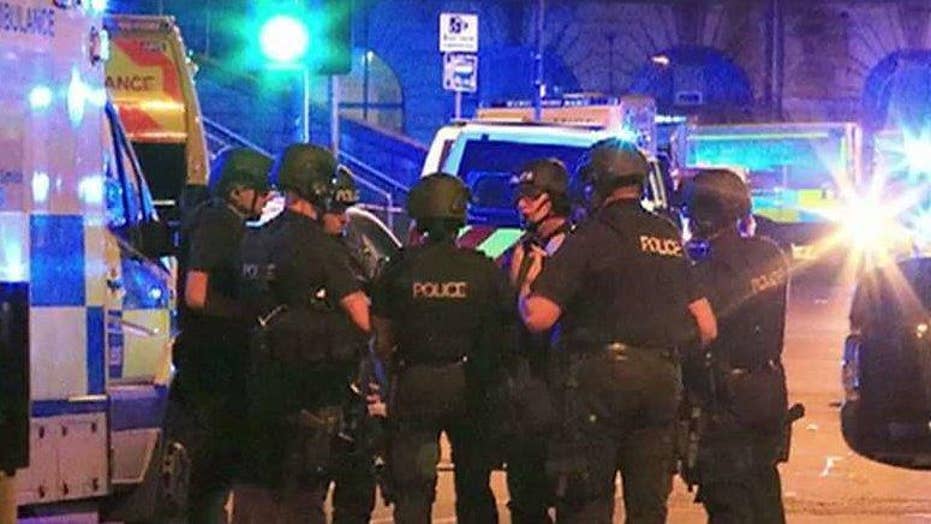 Trauma centers told to prepare for the possibility of another attack this holiday weekend; senior correspondent Rick Leventhal reports from Manchester, England

Investigators have uncovered signs the suicide bomber at the Ariana Grande concert in Manchester may have made a second explosive device that's still missing, local media reported Friday.

The suspicion of a second bomb came after crews on Thursday uncovered a bomb-making workshop at Salman Abedi's home, where they found used and unused containers of chemicals, according to local media. Abedi, 22, blew himself up at Manchester Arena as the concert was ending Monday night, killing 22 people and injuring 119 others.

Greater Manchester police continued raids and searches throughout the city on Friday, arresting another 30-year-old man in connection with the attack. In total, 10 people were arrested, but a man and a woman were later released. Eight people remain in custody.

Investigators feel they are reaching the "outer edge" of the circle of helpers, the "network," that supported Abedi, a British law enforcement official told Fox News.

Still, it was unclear whether a second person might have helped Abedi make the bomb. Materials gathered from the scene illustrated an explosive device that was carefully constructed to cause a deadly impact, according to photos first obtained by The New York Times. The complexity led officials to believe there was a second bomb-maker.

However, a source told Reuters that Abedi still could have made the bomb himself.

Abedi was believed to be living in England and visiting his parents in Libya before the attack — but when he left them, he claimed he was headed to Mecca.

Abedi was visiting his parents in Libya and left four days before the bombing, returning to England while telling his family he was going on a pilgrimage in the Muslim holy city of Mecca, The Wall Street Journal reported. A relative, who spoke to The Associated Press on condition of anonymity, said the 22-year-old was driven to extremism after his friend was fatally stabbed last year. Abedi often complained that the British were "unjust to the Arabs."

Other terror links involving Abedi's relatives also have emerged earlier this week. Abedi's father, Ramadan, was a member of the Al Qaeda-backed Libyan Islamic Fighting group in the 1990s, according to former security official Abdel-Basit Haroun — but the father denied the claim. The killer's brother Hashim had links to the Islamic State and may have been planning a separate attack in Tripoli, a Libyan government spokesman told Reuters. Both family members, including brother Ismail, have been arrested.

British police said late Thursday that it will continue sharing intelligence on the Manchester bombing probe to U.S. officials after temporarily halting the flow of information because of leaks to the media — including The New York Times' publication of the crime-scene photos.

The disclosure infuriated British officials, including Prime Minister Theresa May, who brought up the leaks with President Donald Trump at the NATO summit.

Trump called the leaks "deeply troubling" and demanded the Justice Department launch a full investigation. Shortly after the statement, British officials seemed more at ease about the situation.

"Having received fresh assurances, we are now working closely with our key partners around the world including all those in the Five Eyes intelligence alliance," said Mark Rowley, Britain's top counterterrorism officer, about the alliance comprising Australia, Canada, New Zealand, the United Kingdom, and the United States.