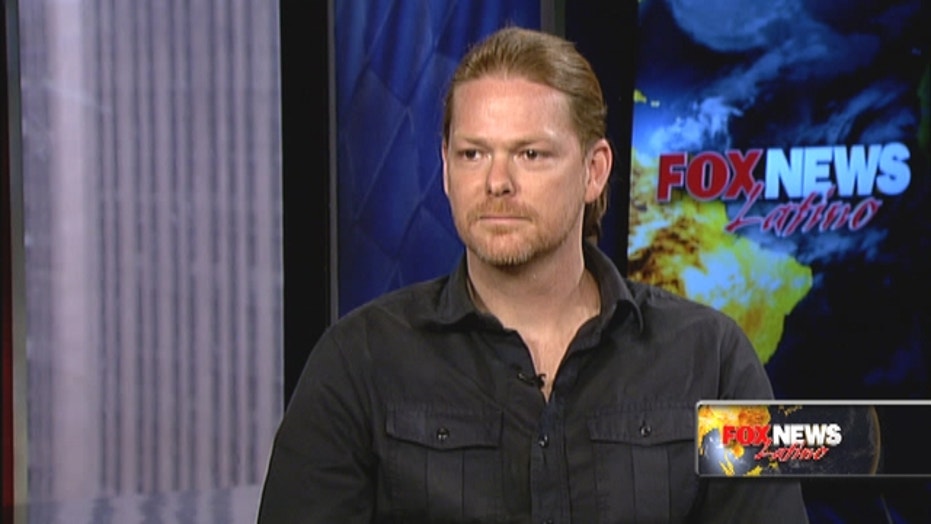 Michael McCabe’s job as a filmmaker has taken him to unsafe corners of the globe where being interrogated by local authorities, and sometimes detained for obscure reasons, is no rarity. But his recent trip to Honduras has been the most worrisome yet.

Michael McCabe’s job as a filmmaker has taken him to unsafe corners of the globe, places where being interrogated by local authorities, and detained for obscure reasons, is no rarity.

McCabe, 45, said he's had his share of dicey moments – the suspicious looks by authorities, probing questions, a shotgun put to his head, arrest and a brief detention.

“They always let you go,” he said with a shrug and a what-can-you-do-about-it look.

But Honduras, where six Americans have been detained for the past month on weapons charges, was different.

He went to the Central American country in early May to film the work of the small crew of the vessel Aqua Quest. The captain, Robert Mayne, the CEO of Florida-based Aqua Quest International, describes his company as one that focuses on “the search for, and archeological recovery of the world’s lost shipwreck resources." The crew arrived near the Ahuas region to remove mahogany logs.

McCabe had traveled to the area with Mayne in February, and was looking forward to the second visit to Honduras, which has had the highest murder rate in the world for several years. The U.S. State Department warns about kidnappings, robberies, rapes and other crimes.

The crew, nonetheless, was focused on its mission.

But not long after the crew arrived on the 65-foot vessel, things started going awry.

Mayne, who had encountered criminals along his trips who had tried to rob him and his crew, carried weapons for protection.

“Their concern was traveling from Florida to the Caribbean through Honduras,” McCabe said. “The area has a lot of narcotics trade, there’s piracy, the captain has dealt with piracy before.”

A security team was set up for the crew in Honduras, aware of the dangers, and how much a U.S. vessel – rarely seen in the area – would attract attention.

Mayne said the captain had carefully reviewed the regulations for carrying weapons, and was sure that everything was in order and pre-approved.

They encountered Navy officials, who were helpful and accommodating, McCabe said, as well other town officials who were equally hospitable and supportive.

But local police authorities were a different story. They boarded the vessel, found the weapons – several firearms, including an AK-47 rifle, two shotguns and two handguns, according to published reports -- and arrested the captain and five crew members based on allegations that they were in possession of illegal arms.

McCabe was held aboard a ship for a week, but was not kept there and was allowed to leave. The captain and rest of the crew, however, have been in jail in Honduras since May 5.

U.S. officials have been vague about what efforts they are undertaking to get their release.

Officials from the U.S. Embassy in Tegucigalpa went to visit the men in jail on May 16. In a statement to Fox News Latino, they said they are closely monitoring the situation and offering the “appropriate” consular assistance.

“Word got around the town that there are ‘gringos’ who have guns,” McCabe said. “It seemed the police felt they had to do something.”

“It just started so slowly, and gradually just got worse,” he said of the situation.

McCabe visited the crew in jail, and said they were growing increasingly hopeless.

“They’ve been told twice that they’re getting out tomorrow, but tomorrow comes and they’re kept in jail,” he said.

U.S. publications cite a Honduran newspaper, El Heraldo, as quoting the commander of the Honduran Navy as saying the crew was arrested because “they carried five weapons, one of which is prohibited, and they did not have a permit to carry weapons in Honduran territory.”

On May 13, a judge ordered the crew to remain in custody indefinitely.

The staff of U.S. Rep. Gus Bilirakis, a Florida Republican, has been calling U.S. officials to pressure them to take action to secure the crew’s release.

Meanwhile, McCabe is trying to do his part from the U.S. to raise awareness about the crew’s detention.

“I understand weapons are a big deal,” he said. “But it’s a shame. This crew was excited to help these people in Honduras. The town of Ahuas was excited, they thought it might bring some economic help to the region. I want to believe they will be able to get out of jail.”