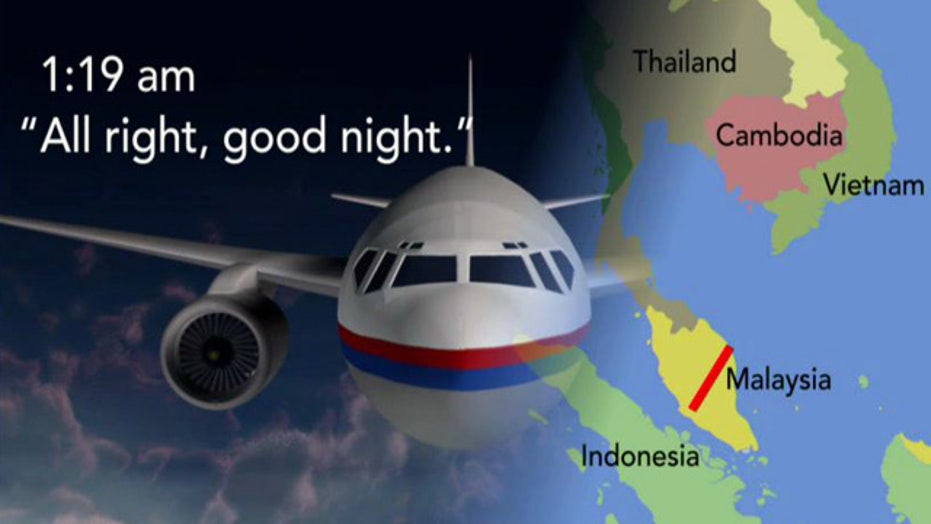 The Malaysia Airlines flight that vanished nearly two weeks ago was already 12 minutes into its diverted course when the plane's co-pilot calmly told air traffic controllers that things were "all right," former FAA spokesman Scott Brenner said Tuesday on "The Kelly File."

"One of the pilots clearly had the intention ... that he was going to take (the plane) in a different direction," Brenner told host Megyn Kelly. "It's 100 percent clear this pilot, or this co-pilot, was going to take this plane with the intent of doing something bad."

At 1:19 p.m. on March 8, 12 minutes after the plane had changed course to the west, co-pilot Fariq Abdul Hamid gave a routine "All right, good night" in his final radio call.

Brenner also believes it's likely that Hamid and pilot Zaharie Ahmad Shah were both involved in the decision to change the flight's course.

"For a pilot or a co-pilot to punch in a new waypoint in their flight management system without the other one noticing would be hard to do," he said.

The news comes one day after the New York Times reported that the route was programmed into a computer system onboard, meaning it was not executed manually by one of the pilots at the controls. Senior American officials told the newspaper that someone entered a code into a knee-high pedestal between the pilot and co-pilot.

The Times reported it is unclear if the change in course was reprogrammed before or after the plane took off, but the change was likely made by someone in the Boeing 777's cockpit with knowledge of airplane systems.

As the investigation into the flight widens, attention has increasingly focused on Hamid and Shah. Reports surfaced soon after the disappearance that Hamid had invited two women into a plane's cockpit for the duration of a December 2011 flight. And hours before the fateful March 8 flight, Shah reportedly had left the trial of Malaysian opposition leader Anwar Ibrahim, who was sentenced to five years in prison for homosexuality. Authorities reportedly were considering the possibility that Shah, reportedly a supporter of Ibrahim, may have diverted the flight as part of a political statement.

Meanwhile, the search for the missing jet continued Tuesday.

The Chinese ambassador to Malaysia announced that China has launched a new search effort in its territory for the missing Malaysia Airlines flight amid growing uncertainty about when a key communications system was disabled on the Boeing 777.

Reports by Chinese media quoted the ambassador, Huang Huikang, as saying search operations were taking place inside China along the northern route investigators believe the plane may have traveled, The Wall Street Journal reported. Details on the search were not immediately available.

"Factors involved in the incident continue to multiply, the area of search-and-rescue continues to broaden, and the level of difficulty increases, but as long as there is one thread of hope, we will continue an all-out effort," China Premier Li Keqiang said.

The search for Flight 370, which vanished while flying from Kuala Lumpur to Beijing with 239 people on board, has now been expanded deep into the northern and southern hemispheres. Australian vessels scoured the southern Indian Ocean and China offered 21 of its satellites to help Malaysia in the unprecedented hunt, but no trace of the plane has been found.

“We know the United States has got possibly the best ability to assist us in locating the aircraft in the southern corridor,” Hussein told reporters Tuesday, according to The Guardian. Hussein said he asked U.S. Defense Secretary Chuck Hagel for help in the search efforts.

The vast scope of the search was underlined when a U.S. destroyer that already has helped cover 15,000 square miles of water dropped out.

The Navy concluded that long-range aircraft were more efficient in looking for the plane or its debris than the USS Kidd and its helicopters, so effective Tuesday the ship was leaving the Indian Ocean search area, said Navy Cmdr. William Marks, spokesman for the 7th Fleet. Navy P-3 and P-8 surveillance aircraft remain available, and can cover 15,000 square miles in a nine-hour flight.

Marks said finding the plane was like trying to locate a few people somewhere between New York and California.

Over the weekend, Prime Minister Najib Razak said investigators determined that a satellite picked up a faint signal from the aircraft about 7 1/2 hours after takeoff. The signal indicated the plane would have been somewhere on a vast arc stretching from Kazakhstan in Central Asia to the southern reaches of the Indian Ocean. The southern Indian Ocean is the world's third-deepest and one of the most remote stretches of water, with little radar coverage.

Malaysia’s government also reportedly has asked countries to re-examine military and satellite radar data in the search for the missing plane, accusing officials of not being fully transparent in their findings.

“The only one out in the open is Malaysia,” Hussein said Tuesday, according to The Guardian.

Thailand's military said Tuesday that its radar detected a plane that may have been Malaysia Airlines Flight 370 just minutes after the jetliner's communications went down, and that it didn't share the information with Malaysia earlier because it wasn't specifically asked for it.

Montol said that at 1:28 a.m., Thai military radar "was able to detect a signal, which was not a normal signal, of a plane flying in the direction opposite from the MH370 plane," back toward Kuala Lumpur. The plane later turned right, toward Butterworth, a Malaysian city along the Malacca strait. The radar signal was infrequent and did not include any data such as the flight number.

Thailand's failure to quickly share possible information about the plane may not substantially change what Malaysian officials now know, but it raises questions about the degree to which some countries are sharing their defense data.

When asked why it took so long to release the information, Montol said, "Because we did not pay any attention to it. The Royal Thai Air Force only looks after any threats against our country." He said the plane never entered Thai airspace and that Malaysia's initial request for information in the early days of the search was not specific.

"When they asked again and there was new information and assumptions from (Malaysian) Prime Minister Najib Razak, we took a look at our information again," Montol said. "It didn't take long for us to figure out, although it did take some experts to find out about it."

Had the plane gone northwest to Central Asia, it would have crossed over countries with busy airspace. Some experts believe it more likely would have gone south, although Malaysian authorities are not ruling out the northern corridor and are eager for radar data that might confirm or rule out that route.

The northern corridor crosses through countries including China, India and Pakistan -- all of which have said they have no sign of the plane. Jonathan Gilliam, a former member of the FBI’s Joint Terrorism Task Force, a retired Navy SEAL and a former federal air marshal, said on “Fox & Friends” Tuesday that the disappearance of the plane highlights issues with regulations in the airline industry.

“I think it already is verified or mandated that you're telling somebody that 'this is the course we are going' and 'this is the course to stay on,’” he said. “But I think there is less regulation once you get over areas where there is no radar, and that’s a big issue.”

Investigators say the jet flew off-course for hours. They haven't ruled out hijacking, sabotage, or pilot suicide, and are checking the backgrounds of the 227 passengers and 12 crew members -- as well as the ground crew -- for personal problems, psychological issues or links to terrorists.

China's state news agency reported Tuesday that background checks on all its nationals on board the missing Malaysian jetliner uncovered no links to terrorism. Xinhua said the Chinese ambassador to Malaysia made the announcement to media in Kuala Lumpur.

The finding dampens speculation that Uighur separatists in China's far western Xinjiang province might have been involved with plane's disappearance.

Malaysian Airlines CEO Ahmad Jauhari Yahya said an initial investigation indicated that the last words ground controllers heard from the plane -- "All right, good night" -- were spoken by the co-pilot, Fariq Abdul Hamid. A voice other than that of Fariq or the pilot, Zaharie Ahmad Shah, it would have been clearest indication yet of something amiss in the cockpit before the flight went off-course.

Malaysian officials had said those words came after one of the jetliner's data communications systems -- the Aircraft Communications Addressing and Reporting System -- had been switched off, suggesting the voice from the cockpit may have been trying to deceive ground controllers.

However, Ahmad said that while the last data transmission from ACARS -- which gives plane performance and maintenance information -- came before that, it was still unclear at what point the system was switched off, making any implications of the timing murkier.

The new information opened the possibility that both ACARS and the plane's transponders, which make the plane visible to civilian air traffic controllers, were turned off at about the same time. It also suggests that the message delivered from the cockpit could have preceded any of the severed communications.

Turning off a transponder is easy and, in rare instances, there may be good reason to do so in flight -- for example, if it were reporting incorrect data.

The area being covered by the Australians is even bigger  -- 600,000 square kilometers (232,000 square miles) -- and will take weeks to search thoroughly, said John Young, manager of Australian Maritime Safety Authority's emergency response division.

"This search will be difficult. The sheer size of the search area poses a huge challenge," John Young, manager of Australian Maritime Safety Authority’s emergency response division, said. "A needle in a haystack remains a good analogy."