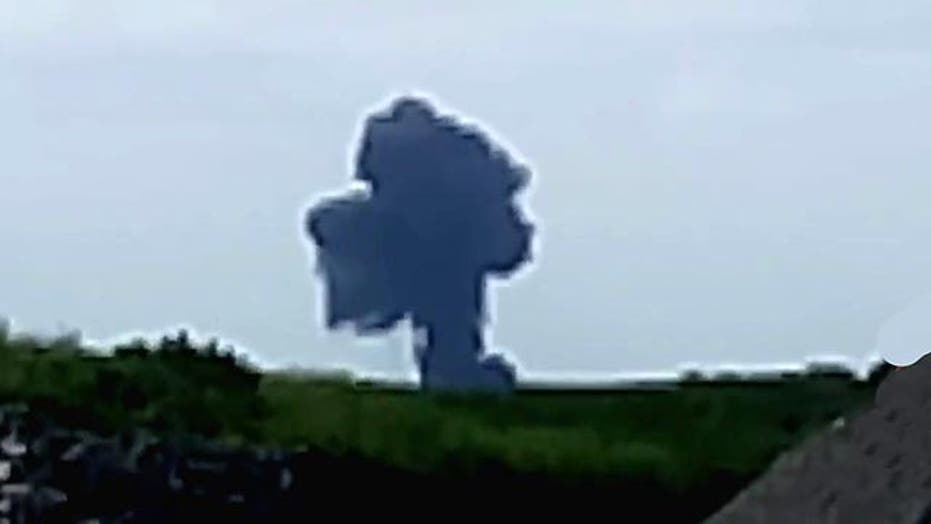 As pro-Russian separatists and the Ukrainian government traded charges about who was behind the surface-to-air missile that downed a Malaysia Airlines jet with 298 aboard Thursday, Ukraine's separatist rebels on Friday said they have found "most" of the plane's recording devices.

The Boeing 777 bound for Kuala Lumpur from Amsterdam was shot down Thursday afternoon at cruising altitude about 35 miles from the border, according to Anton Gerashenko, an adviser to Ukraine's Interior Minister.

Malaysia Airlines originally said there were 280 passengers and a crew of 15 aboard the flight, though it later upped the number of passengers to 283 to account for three infants.

The flight manifest reportedly included the names of 23 Americans, though U.S. officials were unable to confirm Thursday whether any Americans were onboard the plane.

The incident touched off immediate finger-pointing between pro-Russian separatists and the Ukrainian government. Eastern Ukraine separatist leader Alexander Borodai told Reuters that Ukrainian military forces shot the jet down, but Kiev denied involvement and labeled the incident a "terrorist act."

Russian President Vladimir Putin said Ukraine bore responsibility for the crash, but he did not address the question of who might have shot it down and didn't accuse Ukraine of doing so.

"This tragedy would not have happened if there were peace on this land, if the military actions had not been renewed in southeast Ukraine," Putin said, according to a Kremlin statement issued early Friday. "And, certainly, the state over whose territory this occurred bears responsibility for this awful tragedy."

Ukraine's security services produced what they said were two intercepted telephone conversations that showed rebels were responsible. In the first call, the security services said, rebel commander Igor Bezler tells a Russian military intelligence officer that rebel forces shot down a plane. In the second, two rebel fighters — one at the crash scene — say the rocket attack was carried out by insurgents about 25 kilometers (15 miles) north of the site.

Neither recording could be independently verified.

But separatist leader Igor Girkin boasted on Facebook at about the same time the plane went down claiming to have downed a transport plane, though the post was quickly deleted after it became clear the plane was a passenger aircraft.

“In Torez An-26 was shot down, its crashes are lying somewhere near the coal mine “Progress,” read the tweet, obtained by FoxNews.com and translated into English. "We have warned everyone: do not fly in our skies.”

The self-titled "Self-defence forces of the Donetsk People's Republic" boasted in a June 29 press release of having taken control of Buk missile defense systems. The Buk, or SA-11 missile launchers, have a range of up to 72,000 feet.

Separatist groups reportedly blocked Ukrainian officials from the scene following the crash, and later said the "black box," or flight data recorder, had been sent to Moscow. An assistant to Girkin said Friday on condition of anonymity that eight out of the plane's 12 recording devices had been located. He did not elaborate.

He said Girkin was still considering whether to give international crash investigators access to the sprawling crash site. Any investigators would need specific permission from the rebel leadership before they could safely film or take photos at the scene.

The White House issued a statement late Thursday, pressing for a "full, credible, and unimpeded international investigation," adding that it was "vital" that no evidence be tampered with at the crash scene.

"The United States is shocked by the downing of Malaysian Airlines Flight 17, and we offer our deep condolences to all those who lost loved ones on board," the statement said.

The White House said President Obama spoke with Ukrainian President Poroshenko Thursday afternoon to discuss the crash and “emphasized that all evidence from the crash site must remain in place on the territory of Ukraine until international investigators are able to examine all aspects of the tragedy.”

Meanwhile, a U.S. intelligence source told Fox News that the intelligence community was ruling out the possibility the missile was fired by the Ukraine military but could not rule out that it was fired from Russian territory.

The missile was believed to have been fired from a Russian Buk launcher, and the Malaysia Airlines plane appeared to be at least the third aircraft downed in the area since Monday, when a Ukrainian An-26 cargo plane was shot down. Late Wednesday, a Ukrainian Su-25 fighter jet crashed, though it could not be confirmed if it was shot down.

KT McFarland, a former deputy assistant secretary of defense under President Ronald Reagan and a Fox News national security analyst, said the attack was most likely the work of Russian separatists, not the Russian or Ukrainian armies.

"I think it’s far more likely it was rebel forces in eastern Ukraine trying to get the Russian back involved," McFarland said.

But retired Army Lt. Col Ralph Peters, also a Fox News contributor, said it is unlikely the Russian military would have put missile batteries capable of knocking a plane out of the sky at such an altitude in the hands of rebels.

"Russia has a small number of elite forces, but most of the Russian military is ill-trained, sloppy and marginally disciplined.," he said. "With no Western response to them shooting down Ukrainian aircraft, they just got trigger happy."

A Reuters correspondent near the scene reported seeing burning wreckage and bodies strewn across a nine-mile debris field. A Ukrainian Emergency official told the news agency body parts and at least 100 bodies were seen in the area.

The flight manifest reportedly included the names of 23 Americans, though State Department spokeswoman Jen Psaki said at a briefing Thursday afternoon, "we don't have any additional details at this point on American citizens" aboard the plane.

"Obviously, we're seeking that information as we speak," Psaki said.

Other passengers reportedly were from the Netherlands, Australia, Malaysia, Indonesia, Great Britain, Germany, Belgium, the Philippines and Canada.

An AFP journalist at Amsterdam's Schiphol airport –- where the plane had taken off –- said distraught family members were in tears, according to The Telegraph.

Late Thursday, the Federal Aviation Administration issued a notice prohibiting U.S. flight operations in the airspace over eastern Ukraine “due to recent events and the potential for continued hazardous activities.” However, it also noted no scheduled U.S. airlines were currently flying routes through the airspace.

Malaysia Prime Minister Mohd Najib Tun Razak wrote in a post on his Twitter page that, "I am shocked by reports that an MH plane crashed."

"We are launching an immediate investigation," he said.

The Donetsk region government said Thursday's plane crashed near a village called Grabovo, which it said is currently under the control of armed pro-Russian separatists. The area has been a flashpoint to the larger dispute between Ukraine and ethnic Russian separatists. Fighting has intensified in recent months in the region.

President Obama said the incident appeared to "be a terrible tragedy" and that the administration is working to determine whether American citizens were on board. He noted the national security team is in close contact with the Ukrainian government.

Rep. Michael McCaul, R-Texas, chairman of the House Homeland Security Committee, said whether it was intentional or accidental it is an "international incident" when a passenger jet is shot down. McCaul said he believed only a military grade weapon could have downed the plane.

The Boeing jets are equipped with twin Rolls-Royce Trent engines, typically cruising at 35,000 feet and at speeds up to 639 miles per hour.

"Our thoughts and prayers are with those on board the Malaysia Airlines airplane lost over Ukrainian airspace, as well as their families and loved ones," Boeing said in a statement. "Boeing stands ready to provide whatever assistance is requested by authorities."

On March 8, Malaysia Airlines Flight 370, also a Boeing 777 and carrying 227 passengers and 12 crew on a route from Kuala Lumpur to Beijing, disappeared somewhere over the ocean. It has not been found despite expansive searches over land and water.