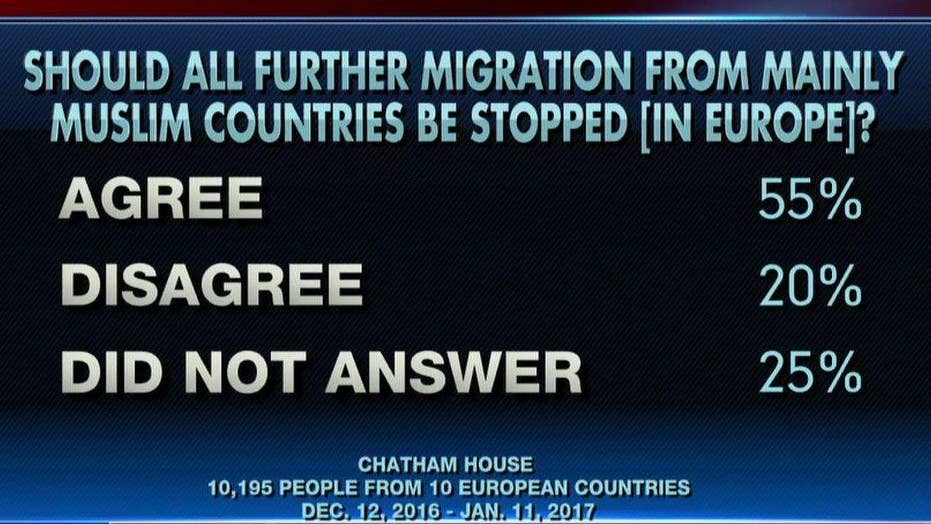 While European leaders have been outspoken in their dislike of President Trump’s immigration restrictions, a new poll indicates that they are not speaking on behalf of their voters -- and that a majority of Europeans are in favor of a Muslim ban that would go much further than Trump’s order.

The Chatham House Royal Institute of International Affairs -- a London-based think tank -- issued a wide-ranging poll that surveyed 10,000 citizens across 10 European countries on their views on a Muslim ban. Specifically it asked respondents if they would support “all further migration from mainly Muslim countries should be stopped.”

Such a ban would be well beyond President Trump’s executive order, which was issued after the poll was conducted. Trump’s order imposed a 90-day moratorium on refugees and immigrants from seven terror hotspots, did not directly target Muslims, and excluded major Muslim countries such as Indonesia, Pakistan and Saudi Arabia.

However, despite the question going well above and beyond what Trump enacted, and specifically targeting Muslims, an average of 55 percent of participants agreed with an indefinite halt.

“Our results are striking and sobering. They suggest that public opposition to any further migration from predominantly Muslim states is by no means confined to Trump’s electorate in the US but is fairly widespread,” experts at the think tank concluded.

While only 47 percent in the U.K. agreed with that statement, and 41 percent in Spain, in other countries, strong majorities backed a ban, with numbers as high as 71 percent in Poland and 65 percent in Austria.

However, 53 percent support the measure in Germany, where Chancellor Angela Merkel is engaged in a tough reelection battle after her support plummeted in the wake of her decision to let more than a million Syrian refugees into the country -- a move that triggered a continent wide crisis.

In France, 61 percent of respondents agreed with the measure. France has been hit by a number of Islamist terror attacks in recent years, and National Front presidential candidate Marine Le Pen, running on an anti-immigration, anti-Islamist platform, has surged to the front of the polls ahead of the country’s presidential election in May. Socialist President Francois Hollande has seen his approval ratings dip to as low as four percent, in part due to his support of Merkel’s refugee policies.

The poll also shows 51 percent support for the measure in Italy, where Prime Minister Matteo Renzi resigned in December, and populist Beppe Grillo’s Five Star Movement is set to make gains in elections in elections before May this year.

The poll also found that there was a widespread perception in many countries that the arrival of refugees would increase the chance of a terror attack, with an average of 59 percent holding that belief.