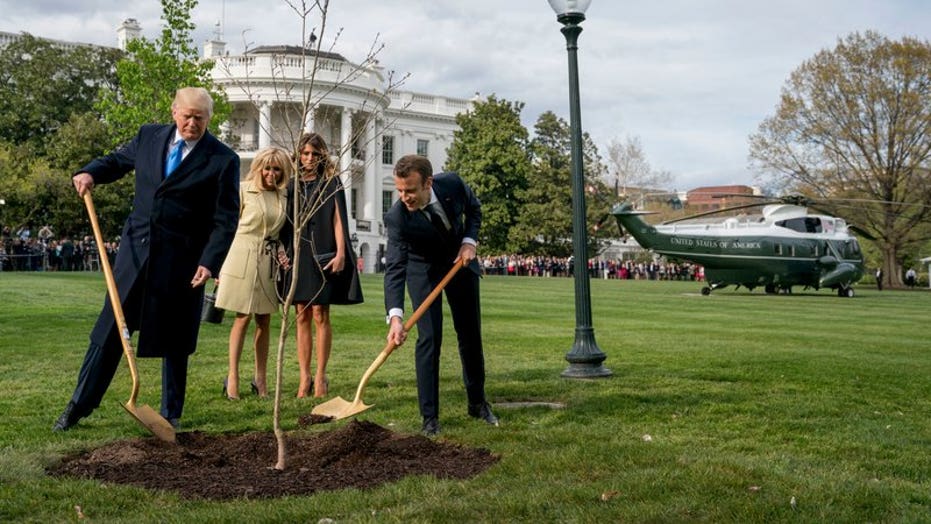 French President Emmanuel Macron pledged to send a new oak tree to President Trump after the original one he gave to Trump during a White House visit last year died.

Macron told Swiss television RTS that the demise of the tree shouldn’t be viewed as an analogy of the relationship between France and the U.S.

“It’s no big drama,” Macron said. “The symbol was to plant it together.”

“It’s no big drama. The symbol was to plant it together.”

He then promised to send another oak from the Belleau Wood in northern France, where more than 1,800 American soldiers died in a key World War I battle in 1918.

Trump and the French president planted the oak tree in the White House’s gardens in April 2018 as a sign of friendship.

“100 years ago, American soldiers fought in France, in Belleau to defend our freedom. This oak tree (my gift to @realDonaldTrump) will be a reminder at the White House of these ties that bind us,” Macron tweeted at the time.

The French leader also shared a video of himself and Trump planting the tree on the White House lawn, as first ladies Brigitte Macron and Melania Trump looked on.

US AMBASSADOR TO FRANCE: TRUMP, MACRON GETTING ALONG 'FAMOUSLY'

The tree had a brief life. Shortly after being planted, it had to be ripped out root and stem and placed in quarantine where it later died.

Yet despite the symbolic setback, officials in both countries say Trump and Macron have been getting along well. U.S. Ambassador to France Jamie McCourt told Fox News last week the two leaders are getting along “famously.”

"I think that's their style. I think they are both trying to do things for their country to make their countries better,” the ambassador told “The Story with Marth MacCallum.”

"I think they may have different perspectives, but they have very open conversations and they are very comfortable agreeing and disagreeing. I think that's exactly how it will continue to be."