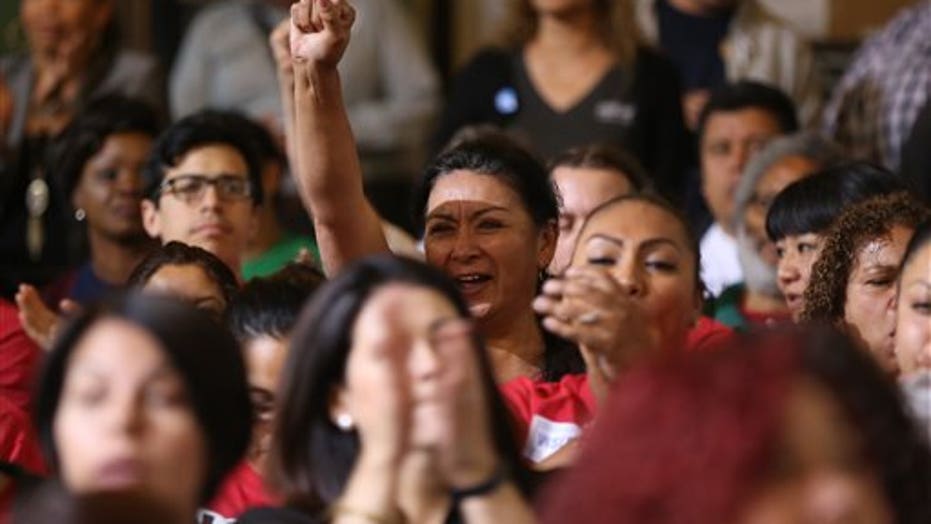 Los Angeles is poised tonight to become the biggest American city with a 15-dollar an hour minimum wage.

LOS ANGELES (AP) – Los Angeles is the latest and biggest city to endorse a hike in the minimum wage, adding to a string of successes for unions and advocates for the poor who have made it a primary objective as American wages stagnate.

But even those who backed the City Council's vote for a $15-an-hour wage by 2020 — more than double the current federal minimum requirement — admit it's an experiment.

There is only patchy data on whether minimum wage bumps hurt or help city economies overall. Seattle and San Francisco only recently passed laws that gradually raise the wage to $15 an hour over several years, while Chicago passed one last year that plateaus at $13.

Still, Los Angeles politicians felt they had to do something to help the throngs of working poor in a city that has some of the highest housing costs in the nation and where nearly 1 in 4 people lives below the poverty line.

The lopsided vote Tuesday of 14-1 ordering drafting of a wage law and the support of Mayor Eric Garcetti virtually guarantee its eventual adoption.

"Today, help is on the way for the 1 million Angelenos who live in poverty," Garcetti said after the vote.

Calls for raising the minimum wage at the national, state and local levels have built as the nation struggles with fallout from the recession, worsening income inequality, persistent poverty and the challenges of immigration and the globe economy.

Average hourly wages in the nation rose just 3 cents in April to $24.87. Wages have risen only 2.2 percent over the past 12 months, roughly the same sluggish pace of the past six years, according to Labor Department figures.

The 9 million jobs lost during the recession have played a role in keeping wages down around the nation and even the recovery has had limited impact.

But the idea of granting people a "living wage" precedes the recession. Baltimore began requiring such a wage for employers with state contracts in 1994. More than 100 cities and counties went on to adopt such laws and in 2007, Maryland adopted the nation's first statewide bill.

Nationwide, labor unions have been active in calling for increases and in organizing low-paid workers such as hotel cleaners, fast-food clerks and chain-store employees.

An ordinance passed last fall in Los Angeles raised the minimum wage to $15.37 an hour for workers at some hotels starting in July.

The Los Angeles ordinance would raise the minimum wage from $9 to $10.50 in July 2016, followed by annual increases until 2020. Nonprofits and businesses with 25 or fewer employees would have an additional year to reach the $15 plateau.

All of the wage hikes are geared toward helping the working poor, especially in cities such as Los Angeles where the price of survival can be daunting.

In many states, the push to raise local minimum wages is opposed by state officials concerned that such measures could create a confusing patchwork of pay rates.

The lone dissenting vote in Los Angeles came from Councilman Mitchell Englander, who said he felt raising the minimum wage above that of other Southern California communities might lead businesses to cut working hours and jobs and make it impossible for entire industries to do business.

Some critics question whether raising the minimum wage will actually help the poorest employees.

Among other things, the higher wages may prompt employers to eliminate the least-skilled workers. Also, many minimum-wage workers aren't poor — many are teenagers who eventually get better jobs — while "most poor families have no workers at all," argued David Neumark, director of the, Center for Economics & Public Policy at University of California, Irvine, in a Los Angeles Times op-ed piece this month.