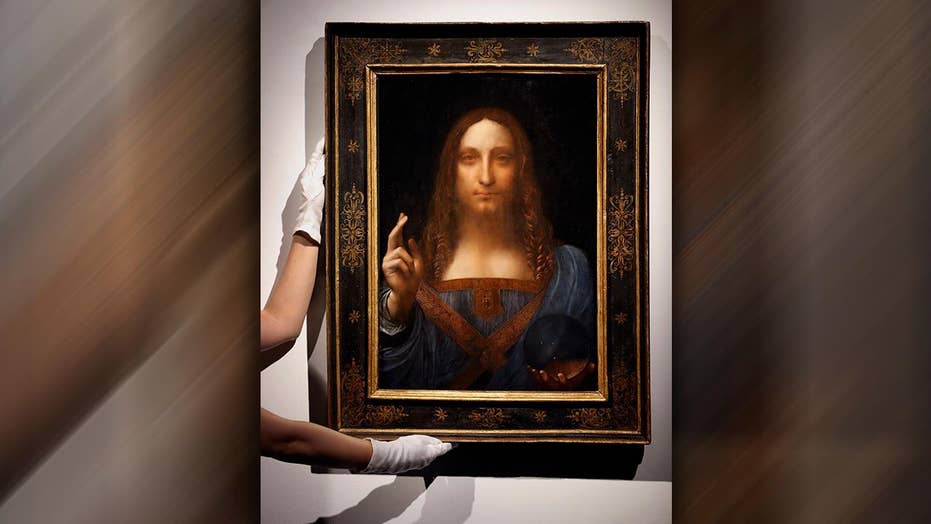 It's the most expensive painting ever sold -- and no one seems to know where it is.

A painting of Jesus Christ attributed to Leonardo Da Vinci, that became the most expensive painting ever sold when it was purchased in 2017 for $450 million by a close ally of the Crown Prince of Saudi Arabia, the "Salvator Mundi" was set to be displayed at the Louvre Abu Dhabi. But the painting is conspicuously absent among the works by Rembrandt, Vermeer, Monet and van Gogh that already hang on display at the museum.

The New York Times reported the Abu Dhabi culture department touted the news that the painting would be displayed at the museum just a month after the auction. However, when it was scheduled to be unveiled at the local Louvre last September, the event was canceled without explanation.

The culture department is refusing to answer questions and staff at the Louvre Abu Dhabi have said they have no knowledge about the painting’s whereabouts.

Additionally, an official at the Louvre in Paris, which licenses its name to the Abu Dhabi museum, told the Times the museum has not been able to locate “Salvator Mundi.”

Both museums declined to provide an official comment to the Times.

A mysterious painting titled the ‘Nude Mona Lisa’ may have been drawn by Leonardo da Vinci.

The painting was purchased on auction in November 2017 by Prince Bader bin Abdullah bin Farhan Al Saud, who is believed to have acted as a proxy for Crown Prince Mohammed bin Salman. He was named the new Saudi Culture Minister in 2018.

Believed to have been painted around 1500, “Salvator Mundi” was one of two similar works listed in an inventory of the collection of King Charles I of England after his execution in 1649, the Times reported, citing Oxford art historian Martin Kemp. The painting disappeared from the historical record in the late 18th century.

But the painting later turned up in the collection of a 19th-century British industrialist, heavily painted over and attributed at the time to one of Da Vinci’s followers.

The claim that the painting was actually that of the renowned Italian painter originated after a pair of dealers spotted it at an auction in New Orleans and took it to Dianne Modestini, a professor at New York University’s Institute of Fine Arts and a conservator, the Times reported.

Modestini, who called the unknown whereabouts of the painting “tragic,” stripped away overpainting, repaired damage to the wood panel and restored details.

“To deprive the art lovers and many others who were moved by this picture — a masterpiece of such rarity — is deeply unfair,” she said.

Russian billionaire, Dmitry E. Rybolovlev, bought it for $127.5 million in 2013 after it was displayed at the National Gallery in London. He then auctioned it off via Christie’s in New York four years later for the record $450.3 million.

Rumors in the art world swirled that the painting had been taken to Europe after the completion of payment and Modestini said she heard from a restoration expert that he had been asked by an insurance company to examine the painting in Zurich last fall before further shipping.

The examination was canceled, however, the Times reported.