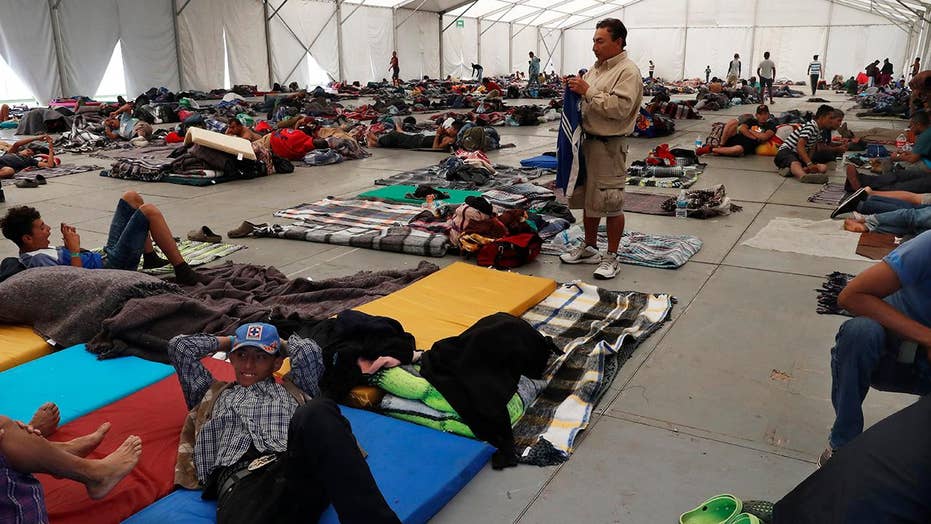 Over 2,500 migrants are getting meals, health care at one Mexico City shelter

MEXICO CITY -- As dawn breaks at an outdoor sports stadium here, Mexican Marines are busy cooking beef, eggs and beans for the 2,673 migrants that have arrived here, according to officials. More are expected to arrive this week.

Upon arrival, they receive blankets, shelter, heath care, sanitary amenities and hot meals. They are housed in three massive tents inside the sports complex, are protected by around the clock security and have access to a soccer field and playground.

They must fill out a form indicating their country of origin, gender and age – but are not required to give their name. A green bracelet identifies them in the shelter with a number corresponding to the registry.

THOUSANDS OF CARAVAN MIGRANTS REQUEST TEMPORARY ASYLUM IN MEXICO; SOME TRY RETURNING TO US

Here they have the option – but are not required – to officially register in Mexico and seek temporary asylum for up to one year.

This is part of a larger operation as the total number of migrants that have registered for Mexico’s new offer exceeds 12,500.

And it’s part of the new Lopez Obrador administration’s “far-reaching” approach to migration in general.

“Mexico’s position will no longer be one of migration deterrence and blockage,” writes Roberto Velasco Alvarez, spokesman for the Sec of Foreign Affairs in an op-ed for The Washington Post.

Alvarez also criticizes the U.S.’ new policy known as “Remain in Mexico” or Migrant Protection Protocols that requires migrants seeking asylum in America to wait in Mexico while their claims play out.

Implemented last Friday at the San Ysidro port of entry between Tijuana and San Diego, it drew a visit yesterday from Homeland Security Secretary Kirstjen Nielsen.

It’s also causing many of the migrants here in Mexico City to second-guess the traditional route to Tijuana.

“We may try Nogales or another port,” says Carlos Nunez who began this journey with the caravan in San Pedro Sula, Honduras on Jan 15th. Nunez says he will head for the border likely today or tomorrow.

And while these are the largest numbers associated with the caravans to date, more are on the way.

A flyer for another caravan originating in San Pedro Sula, Honduras at the same location as the last one, is set to depart on Feb 16th at 11pm.