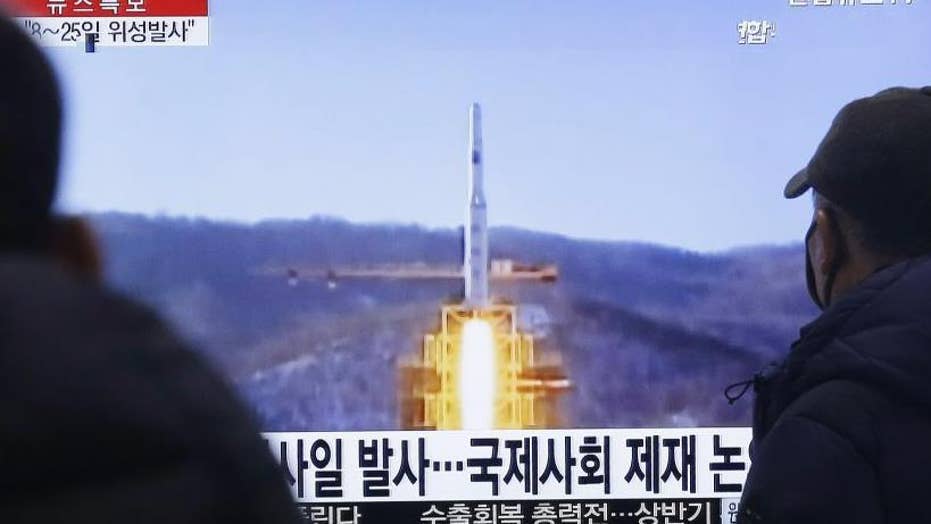 South Korea launched missiles of its own after the rogue regime sent a rocket over Japan; Greg Palkot has more for 'Special Report'

North Korean strongman Kim Jong Un said his country is close to achieving military "equilibrium" with the United States as a way to make American leaders "dare not talk" about military options for dealing with Pyongyang.

The dictator said the country’s final goal "is to establish the equilibrium of real force with the U.S. and make the U.S. rulers dare not talk about military option for the DPRK," referring to North Korea's official name, the Democratic People's Republic of Korea, according to the state-run Korean Central News Agency.

Kim indicated that more missile tests would be forthcoming, saying that all future drills should be "meaningful and practical ones for increasing the combat power of the nuclear force" to establish an order in the deployment of nuclear warheads for "actual war."

The BBC quoted Kim as scoffing at the new U.N. sanctions.

"We should clearly show the big power chauvinists how our state attain the goal of completing its nuclear force despite their limitless sanctions and blockade," the BBC quoted Kim as saying to the KCNA.

It traveled 2,300 miles as it passed over the Japanese island of Hokkaido before landing in the northern Pacific Ocean. It was the country's longest-ever test flight of a ballistic missile.

Under Kim Jong Un's watch, North Korea has maintained a torrid pace in weapons tests, including its most powerful nuclear test to date on Sept. 3 and two July flight tests of intercontinental ballistic missiles that could strike deep into the U.S. mainland when perfected.

The KCNA said Kim expressed great satisfaction over the launch, which he said verified the "combat efficiency and reliability" of the missile and the success of efforts to increase its power.

While the English version of the report was less straightforward, the Korean version quoted Kim as declaring the missile as operationally ready. He vowed to complete his nuclear weapons program in the face of strengthening international sanctions, the agency said.

The U.N. Security Council accused North Korea of undermining regional peace and security by launching its latest missile over Japan and said its nuclear and missile tests "have caused grave security concerns around the world" and threaten all 193 U.N. member states.

Kim also said the country, despite "limitless" international sanctions, has nearly completed the building of its nuclear weapons force and called for "all-state efforts" to reach the goal and obtain a "capacity for nuclear counterattack the U.S. cannot cope with."

"As recognized by the whole world, we have made all these achievements despite the U.N. sanctions that have lasted for decades," the agency quoted Kim as saying.

Prior to the launches over Japan, North Korea had threatened to fire a salvo of Hwasong-12s toward Guam, the U.S. Pacific island territory and military hub the North has called an "advanced base of invasion."

The Security Council stressed in a statement after a closed-door emergency meeting that all countries must "fully, comprehensively and immediately" implement all U.N. sanctions.

Japan's U.N. Ambassador Koro Bessho called the missile launch an "outrageous act" that is not only a threat to Japan's security but a threat to the whole world.