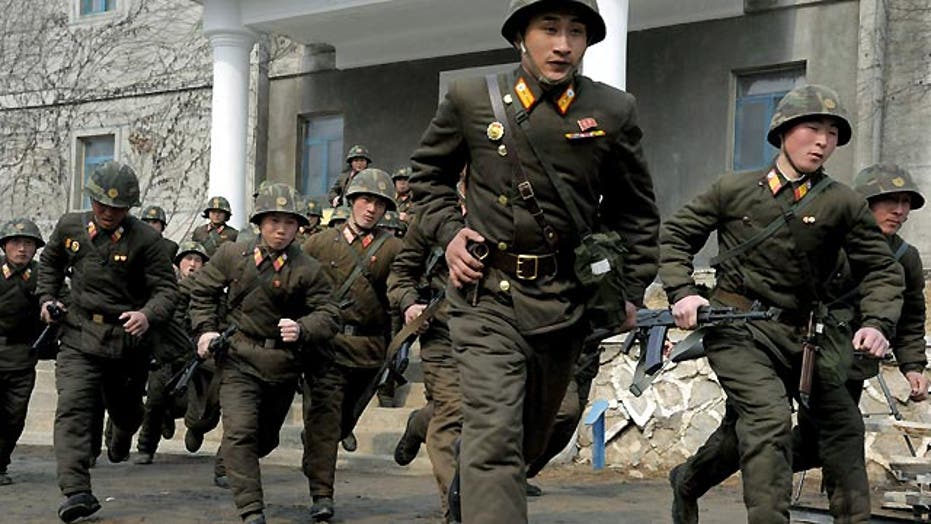 North Korea's young leader urged front-line troops to be on "maximum alert" for a potential war as a state-run newspaper said Pyongyang had carried out a threat to cancel the 1953 armistice that ended the Korean War.

Kim Jong Un told artillery troops stationed near disputed waters that have seen several bloody clashes in past years that "war can break out right now," according to a report by North Korean state media.

Kim's visit and the armistice claim are part of a torrent of angry North Korean rhetoric that has followed last week's U.N. sanctions over Pyongyang's Feb. 12 nuclear test. Pyongyang has also vowed to strike the United States with nuclear weapons.

It is unclear, however, what will come next and whether North Korea will match its words with action. South Korea's Defense Ministry said Tuesday there were no signs that North Korea would attack or conduct more nuclear or missile tests anytime soon and that Pyongyang was merely trying to apply "psychological pressure" on the South.

A U.N. spokesman said that Pyongyang cannot unilaterally dissolve the armistice, which is still valid. Pyongyang is also years away from acquiring the smaller, lighter nuclear warheads needed to pose a credible nuclear missile threat to the United States.

Indeed, several signs pointed to business as usual between the Koreas -- despite the bluster.

North Korea apparently cut one telephone and fax hotline at a village straddling the Demilitarized Zone between the countries, but otherwise there have been no substantial operational changes, Seoul's Unification Ministry and Joint Chiefs of Staff said Tuesday.

There are at least two other working communication channels between the Koreas. As they did Monday, the two Koreas used a separate military hotline Tuesday to allow hundreds of South Koreans to cross the border to a jointly run factory park in the North Korean border town of Kaesong, according to the South's Unification Ministry.

Much of the bellicosity is seen as an effort to shore up loyalty among citizens and the military for Kim Jong Un.

U.S. National Security adviser Tom Donilon told the Asia Society in New York that Pyongyang's claims may be "hyperbolic," but the United States will protect its allies.

"There should be no doubt: We will draw upon the full range of our capabilities to protect against, and to respond to, the threat posed to us and to our allies by North Korea," Donilon said.

Aside from the nuclear threats, Pyongyang has so far only made a somewhat mysterious promise to strike its enemies at a time and place of its own choosing. This alarms many, however, as two sudden attacks blamed on North Korea killed 50 South Koreans in 2010.

Seoul has responded to North Korean threats with tough talk of its own and has placed its troops on high alert.

The North Korean government made no formal announcement on its repeated threats to scrap the 60-year-old armistice, but the country's main newspaper, Rodong Sinmun, reported that the armistice was nullified Monday as Pyongyang had said it would.

The North has threatened to nullify the armistice several times before, and in 1996, after one such vow, it sent hundreds of armed troops into a border village. The troops later withdrew.

Despite the Rodong Sinmun report, U.N. spokesman Martin Nesirky said the armistice is still valid and still in force because the armistice agreement had been adopted by the U.N. General Assembly and can't be dissolved unilaterally.

Nesirky added that officials at U.N. headquarters in New York were unaware of any operational changes on the ground on the Korean Peninsula.

White House spokesman Jay Carney said the U.S. was "certainly concerned by North Korea's bellicose rhetoric. And the threats that they have been making follow a pattern designed to raise tension and intimidate others."

The angry words from both Koreas haven't stopped them from communicating about the only remaining operational symbol of joint cooperation, the Kaesong industrial complex. It is operated in North Korea with South Korean money and know-how and a mostly North Korean workforce -- and provides a badly needed flow of hard currency to a country where many face food shortages.

Also continuing are large-scale North Korean drills that Seoul says involve the army, navy and air force. The South Korean Defense Ministry said there have been no military activities it considers suspicious.

The North Korean rhetoric escalated as the U.N. Security Council on Thursday approved a new round of sanctions over Pyongyang's nuclear test.

"This is part of their brinksmanship," said Daniel Pinkston, a Seoul-based expert on North Korea with the International Crisis Group think tank. "It's an effort to signal their resolve, to show they are willing to take greater risks, with the expectation that everyone else caves in and gives them what they want."

Part of what North Korea wants is a formal peace treaty to end the Korean War, instead of the armistice that leaves the peninsula still technically in a state of war. It also wants security guarantees and other concessions, direct talks with Washington, recognition as a nuclear weapons state, and the removal of 28,500 U.S. troops stationed in South Korea.

Pinkston said there is little chance of fighting breaking out while war games are being conducted, but he added that he expects North Korea to stage some sort of provocation in the future.

South Korean and U.S. officials have been closely monitoring Pyongyang's actions and parsing its recent rhetoric, which has been more warlike than usual.

Under new President Park Geun-hye, South Korea's Defense Ministry, which often brushes off North Korean threats, has looked to send a message of strength in response to the latest comments from Pyongyang.

The ministry has warned that the North's government would "evaporate from the face of the Earth" if it ever used a nuclear weapon.

While outside scientists are still trying to determine specifics, the North's rocket test in December and third nuclear test last month may have pushed the country a step closer to acquiring the ability to hit the U.S. with weapons of mass destruction.

Analysts have also said that more missile and nuclear tests are possible reactions from North Korea.

North Korea has a variety of missiles and other weapons capable of striking South Korea. Both the warship sinking and island shelling in 2010 occurred near a western sea boundary that North Korea fiercely disputes. It has been a recurring flashpoint between the rivals that has seen three other bloody naval skirmishes since 1999.