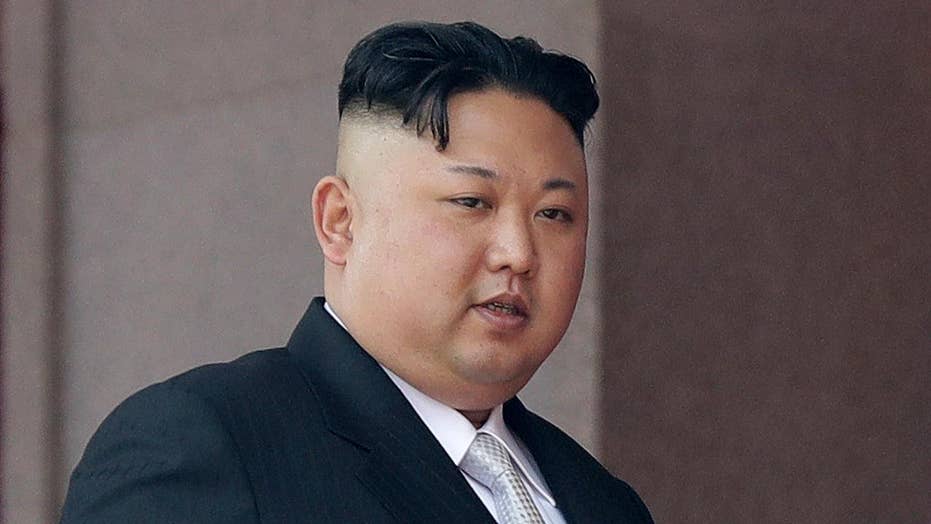 North Korean dictator Kim Jong Un is reportedly so terrified of being targeted for assassination that he travels incognito inside the Hermit Kingdom, and there’s growing evidence his paranoia may be well-founded.

The 33-year-old, third-generation ruler is “extremely nervous” about a clandestine plot to take him out, according to a key South Korean lawmaker who spoke to The Korea Herald. Rep. Lee Cheol-woo, chairman of the South Korean parliament's intelligence committee, made the claim based on reports from South Korea's intelligence agency.

“Kim is engrossed with collecting information about the ‘decapitation operation’ through his intelligence agencies,” Lee said following a briefing last week.

“Kim is engrossed with collecting information about the ‘decapitation operation’ through his intelligence agencies.”

The rumored “decapitation plan” to target Kim and key deputies in the event fighting broke out on the peninsula first surfaced in late 2015, when the U.S. and South Korea signed “Operation Plan 5015,” a joint strategy for possible war scenarios with North Korea. According to the Brookings Institute, the plan "envisions limited warfare with an emphasis on preemptive strikes on strategic targets in North Korea and “decapitation raids” to exterminate North Korean leaders."

Something about the term “decapitation” seems to have gotten the attention of the gout-addled, unpredictable and violent dictator. According to Lee, Kim’s is so frightened that he now disguises his movements, travels primarily at dawn and in the cars of his henchmen. Public appearances and jaunts in his prized Mercedes Benz 600 have been curtailed.

Kim Jong Un is petrified that he could be the target of a "decapitation" raid. (Reuters)

North Korea’s United Nations representative referenced the “beheading operation” in a sternly worded, 2016 letter to the body’s Security Council, suggesting that the joint military operations regularly conducted by the U.S. and South Korea “constitute a grave threat to [North Korea] as well as international peace and security.”

By January of this year, there were reports that South Korea was speeding up the creation of a specialized unit designed for this mission, initially slated to be ready by 2019.

During this year's Foal Eagle and Key Resolve exercises with South Korea, one of the largest annual military exercises in the world, members of U.S. Navy SEAL teams reportedly participated in decapitation drills with our South Korean counterparts for the first time.  Naval officials denied reports that members of SEAL Team 6, the group that took out Usama Bin Laden, took part.

Shortly after those war games, however, the USS Michigan, a submarine that is sometimes used to move U.S. Special Forces, took a position just off of North Korea’s coast.

While there are concerns that taking out North Korea’s leader might not be enough, a White House review revealed earlier this year that the U.S. strategy on North Korea does include the possibility of regime change.

The Navy SEAL raid that took out Bin Laden in 2011 was easy compared to the challenge of assassinating Kim, say experts. (Associated Press)

Kim has become a major problem regionally and for the U.S. as well. Pyongyang has repeatedly tested missiles potentially capable of delivering nuclear warheads and Kim’s threats against South Korea, Japan and the U.S. have grown increasingly bellicose. Last week, North Korea returned American college student Otto Warmbier after holding him for 17 months on a dubious charge. Doctors say Warmbier underwent devastating brain injuries while in North Korean custody and is now in an unresponsive state. Three other U.S. citizens remain locked up in the reclusive nation’s infamous gulags.

But while taking out Kim may be a possibility, experts say it would be much more complicated that the 2011 raid in Pakistan in which CIA operatives and SEALs took out Bin Laden.

"A U.S. special operations strike against Kim Jong Un in today’s conditions would make the bin Laden raid look easy," said Mark Sauter, a former U.S. Army and special forces officer who operated in the Korean de-militarized zone during the Cold War and now blogs about the decades-long effort to defend South Korea at www.dmzwar.com.

The daring, night-time raid on the Abbottabad compound went off nearly flawlessly. But U.S. forces would face much more deadly opposition in an assault on the North Korean capital.

"Pyongyang is surrounded by antiaircraft weapons, and while the corpulent Kim presents a large and sluggish target, he’s kept on the move, always surrounded by fanatical guards and often near or in complex underground compounds," Sauter said.

Despite those potential challenges, Sauter suggests the North Korean leader "does need to worry about strikes by precision-guided missiles and bunker-buster bombs in the early stages of a preemptive allied attack, and if a conflict continues, everything from (Unmanned Aerial Vehicles) to special operators will be on his tracks."