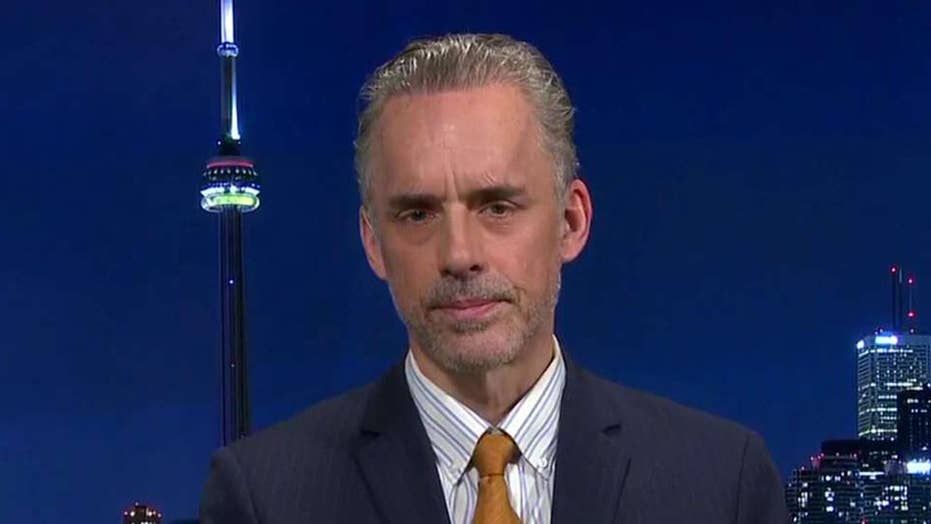 'Men in America,' Part 1: Why are men in the U.S. falling increasingly behind women in America? One scholar believes ideological policies that focus on de-emphasizing masculinity may be part of the problem. #Tucker

University of Toronto psychology professor Jordan Peterson fired back at a far-left columnist who called him a “fascist.”

In a profanity-laced tirade, Peterson tweeted that Pankaj Mishra – who wrote a scathing review of his book – was a “sanctimonious prick” and an “arrogant, racist son of a b***.”

“If you were in my room at the moment, I’d slap you happily,” Peterson tweeted as he ripped into Mishra’s column called “Jordan Peterson & Fascist Mysticism.”

Mishra, a novelist and essayist, was highly critical of Peterson’s new book, “12 Rules for Life: An Antidote to Chaos,” in a column in the New York Review of Books published Monday. The book, an Amazon bestseller, seeks to answer 12 “practical and profound rules for life.”

Peterson told Tucker Carlson earlier this month he believes the ideological policies in America that focus on de-emphasizing masculinity are only hurting men, not helping them, something he highlights throughout his book and which Mishra takes him to task for.

“It is imperative to ask why and how this obscure Canadian academic, who insists that gender and class hierarchies are ordained by nature and validated by science, has suddenly come to be hailed as the West’s most influential public intellectual,” Mishra wrote in his column. “For his apotheosis speaks of a crisis that is at least as deep as the one signified by Donald Trump’s unexpected leadership of the free world.”

Peterson fought back. He attacked Mishra for questioning whether Peterson had actually been inducted into an indigenous tribe in British Columbia.

He called Mishra a “peddler of nasty, underhanded innuendo, you dealer in lies and halftruths” for saying “Peterson claims that he has been inducted into ‘the coastal Pacific Kwakwaka’wakw tribe…’”

“Just what do you mean by ‘claims’?” Peterson asked.

“F*** you,” he said, adding that he was inducted into the tribe in part because of his work with Joseph on the Kwakiutl Nation totem pole being put up in Montreal, Quebec.

“Is that a ‘claim,’ too, and something brought about by the romance of a fascist with a noble savage?” he tweeted.

Peterson ended the tweetstorm by trashing the site that published Mishra’s piece.

“Apparently, when you’re the ‘premier literary-intellectual magazine in the English language’ you can justify publishing libelous, racist tripe @nybooks,” he wrote.