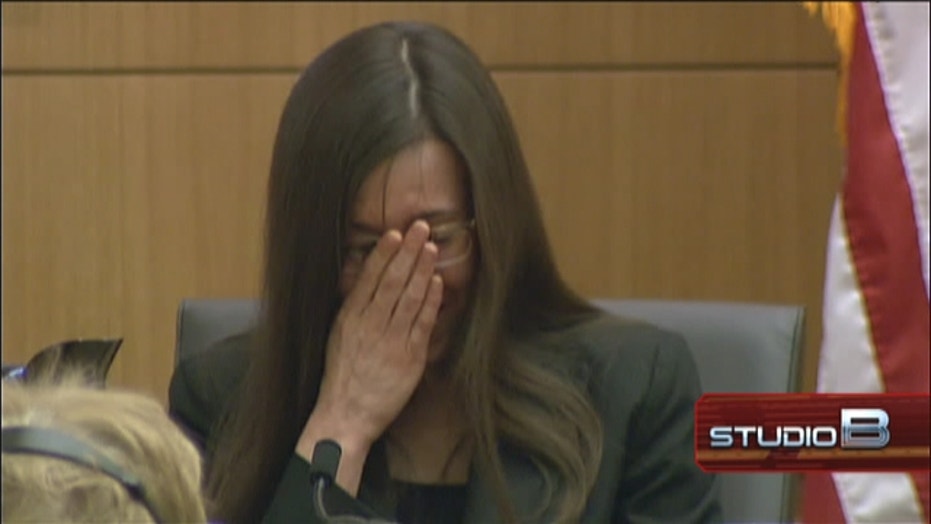 Jodi Arias Breaks Down on the Stand

Jodi Arias weeps as testimony turns to killing of lover.

PHOENIX – An emotionally distraught Jodi Arias wept Thursday, burying her face in her hands on the witness stand, as a prosecutor began a heated line of questioning about the day she allegedly killed her lover.

"Ma'am, were you crying when you were shooting him?" prosecutor Juan Martinez snapped.

"Were you crying when you were stabbing him?" Martinez prodded.

"How about when you cut his throat, were you crying then?" the prosecutor asked loudly.

As Arias continued to cry, the judge called the afternoon break early in her murder trial to allow the defendant to compose herself before testimony resumes.

Arias, 32, is charged in the June 2008 killing of her lover in his suburban Phoenix home. She says she was forced to fight for her life after Travis Alexander attacked her, but police say she planned the killing in a jealous rage. Arias initially told authorities she had nothing to do with Alexander's death, then later blamed it on masked intruders before eventually settling on self-defense.

Martinez has been working to chip away at her numerous stories over nearly four days of intense cross-examination, during which she has admitted to lying repeatedly. She says she was too scared and ashamed to tell the truth sooner, but Martinez has pointed out how she was meticulously planning an alibi immediately after the killing.

Alexander was stabbed and slashed 27 times, had his throat slit and was shot in the forehead. His body was found about five days later crumpled in his shower.

Arias says he lunged at her after she dropped his new digital camera while taking nude photos of him, then body-slammed her and chased her around the house. She said she grabbed a gun from his closet and fired it as they tussled, but has no recollection of stabbing him. Arias said she disposed of the gun in the desert, then went to visit a man in Utah, acting as if nothing had happened in an attempt to throw off suspicion.

She says she recalls little else from the day of the killing, but clearly remembers Alexander slamming her to the ground, then standing over her in a rage.

"I was terrified," Arias said Thursday.

Martinez then asked whether Alexander might have just been trying to help her up and apologize.

"I don't even know how to answer that," Arias said.

Jurors haven't heard from any witnesses or seen any evidence indicating Alexander had shown physically violent behavior in the past.

Authorities are working to prove Arias planned the attack as they aim for a first-degree murder conviction and the death penalty. Arias has testified she brought no weapons to Alexander's home on the day of the killing, trying to undercut the prosecution's theory of premeditation.

Her grandparents had reported a .25 caliber handgun stolen from their Northern California home about a week before Alexander's death — the same caliber used to shoot him — yet Arias said she didn't even know her grandfather had the weapon.

On Wednesday, she acknowledged she enjoyed raunchy sex acts with the victim contrary to previous testimony that he coerced her to perform them, at times making her feel like a prostitute.