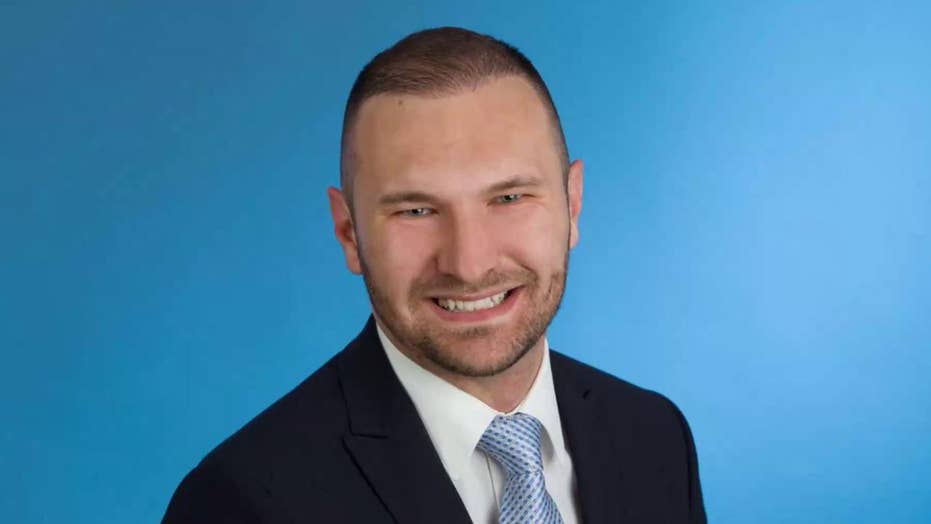 Dimitri Schulz is a Jewish man who joined Germany’s Alternative for Germany party. While the group has been accused of being anti-Semitic, Schultz says the party is the only one who fights anti-Semitism within the Islamic community.

Dimitri Schulz is Jewish, and yet he is running as a candidate for the Alternative for Germany (AFD), a party with anti-Semitic leanings and a leader who has been accused of echoing Adolf Hitler.

But Schulz, 31, believes the AFD is the only German party that's fighting Muslim anti-Semitism.

"I am a Jewish member of the AFD because anti-Semitism is growing with the Islamization of our nation, and Jewish life is in danger," Schulz told Fox News.

Schulz is among a handful of Jews who formed the Jewish Alternative for Germany within the AFD earlier this month.

The stakes are high in this Sunday's election in the German state of Hesse. If the AFD makes a strong showing, as expected, it would take votes from Angela Merkel's Christian Democratic Union (CDU) and her leadership could potentially be in jeopardy.

Polls indicate that the AFD will likely get 10 to 15 percent of the vote, which would give it seats in the state legislature for the first time. In 2013, the upstart party failed to gain the minimum 5 percent necessary for representation.

Since then, the AFD has gone from strength to strength, gaining representation in the German Bundestag for the first time. In the 2017 federal elections, it secured 92 of the 709 seats, making it the third largest party in the German parliament. It now acts as the main opposition to the governing coalition made up of Merkel's centrist CDU and the left-leaning Social Democratic Party (SPD).

This opposition, according to observers, exhibits extreme nationalism, xenophobic hatred for Muslims and an affinity for neo-Nazi ideology.

In an opinion article in the respected Frankfurter Allgemeine Zeitung, AFD leader Alexander Gauland attacked a "globalized class" that threatens German and European identity. Historians who specialize in the Nazi era have noted that this rhetoric is reminiscent of a 1933 speech Adolf Hitler gave in which he targeted "a small rootless, international clique" that exploits Germans. Historian Wolfgang Benz has said Gauland deliberately modeled his commentary on Hitler's speech.

AFD members recently joined anti-Muslim demonstrators who gave the Hitler salute in Chemnitz, Eastern Germany. A 34-year-old man attending the rally on August 27 was given a five-month jail term for making the salute. Nazi symbols and signs are illegal in Germany. The demonstrations began after the murder of a German by two men of Middle Eastern origin

Robert Lambrou, spokesperson for the Hesse AFD, told Fox News that the party learned from Chemnitz to avoid demonstrations with people who espouse such offensive views. He insisted the AFD is not anti-Semitic, pointing instead to the increasing number of Muslims in Germany as the greatest threat to Jews.

The president of the Central Council of Jews in Germany, however, has said the AFD supports anti-Jewish hatred and relativizes, even denies, the Holocaust. Only a small number of Germany's 100,000 registered Jews support the AFD.

A man raises his arm in a Heil Hitler salute towards heckling leftists at a right-wing protest gathering the day after a man was stabbed and died of his injuries on August 27, 2018 in Chemnitz, Germany (Getty)

MERKEL: 'NO EXCUSE FOR FAR-RIGHT VIOLENCE IN DEMONSTRATIONS

The AFD platform calls for banning religious slaughter of animals. When asked about this ban, Schulz claimed the provision was not aimed at Jews. The ban includes both Muslim halal and Jewish kosher slaughter. Lambrou, who is not Jewish, evaded a question about the impact on Jewish life.

Schulz said the ban enshrines animal welfare into basic law and protects the natural foundations of life. He views such protection as based on Jewish principles of the Torah.

"Painfully killing is not kosher," he said, arguing that it is in the Jewish interest to demand a ban. He claims there are not enough trained kosher slaughterers in Germany for humane killing and advocates instead for importation of kosher meat.

Deidre Berger, director of the American Jewish Committee's Berlin office, disagrees. If this proposal became law, she said, it would de facto end Jewish life in Germany for religious Jews. This evaluation of the impact of the proposed ban reflects the view of almost all Jewish religious authorities. Some AFD members call for banning circumcision, also on humanitarian grounds, which would have the same devastating effect on Jewish religious life.

The fact that Schulz, like the majority of Germany's Jews, is from the former Soviet Union, may in part explain his non-orthodox interpretation of Jewish law, as well as his political leanings.

According to Professor Julius Schoeps, director of the Moses Mendelsohn Center for Jewish European Studies in Potsdam, near Berlin, the background of Russian Jews partly explains their politics. During a telephone interview, Schoeps pointed out that religious practice and Jewish identity were discouraged under communism. Most do not have a Jewish tradition and come from a country charged with nationalism, he said.

Sergey Lagodinsky, a political activist and expert on anti-Semitism, said that Eastern European immigrants and those from the former Soviet Union are more open to radical right-wing solutions.

"This openness, coupled with insecurity and uncertainly, produces what we see now in the case of Jews in the Alternative for Germany,” he said.

Despite its anti-Semitic strains, the AFD is staunchly pro-Israel. The far right sees Israel as a partner against a common enemy, the Arabs, said Avi Primor, who served as Israel's ambassador to Germany from 1993 to 1999.

Anti-Arab, anti-Muslim, anti-refugee sentiment in Germany continues to fuel the ever growing support for AFD, at the expense of Merkel's CDU.  According to a September poll by Deutschlandtrend, a respected sampler of public opinion, the governing coalition continues to lose voter support.

The Christian Social Union (CSU), the sister party of Merkel's CDU, suffered a crushing defeat in the Bavarian election on October 14, losing an absolute majority for only the second time since 1962. The AFD, which won 10.2 percent of the vote, was the beneficiary of the CSU loss.

What are AFD's main criticisms of Merkel? Lambrou responded to this question without hesitation.

"The worst decision was to let more than a million refugees into the country," he said.