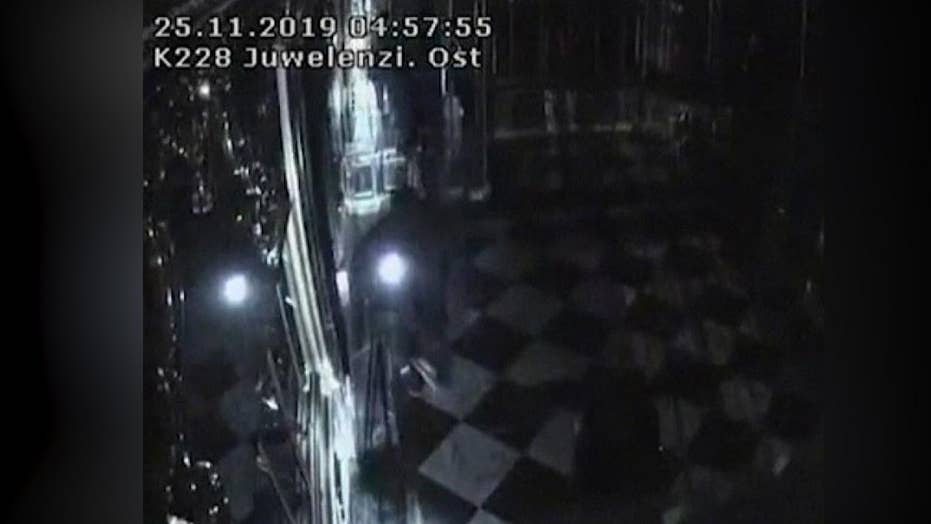 The $1.1 billion in jewelry stolen in a brazen heist at the Dresden Green Vault in Germany earlier this week was not insured and could be a total loss for the museum, reports said.

The practice of not insuring "priceless" jewelry is not uncommon for museums because the premiums are so high. Bloomberg reported that these public institutions have limited budgets and oftentimes only insure artwork on loan from other museums.

Police officers work behind a caution tape at the Schinkelwache building in Dresden Monday, Nov. 25, 2019.  (Sebastian Kahnert/dpa via AP)

“If the jewels aren’t recovered, this part of the collection will be lost forever,” Julia Ries, the head of Ergo Group AG, told Bloomberg.

Two jewel thieves scored ensembles of early 18th-century diamonds, rubies and emeralds while the museum was closed to the public. The entire heist only took a few minutes. Police responded after a security camera spotted the two triggering an alarm at about 5 a.m. The jewels—dozens of them-- are well known and cannot be sold on the art market. Authorities believe they will likely be broken down and sold individually.

This Tuesday April 4, 2019 photo shows a part of the collection at Dresden's Green Vault in Dresden. Authorities in Germany say thieves have carried out a brazen heist at Dresden’s Green Vault, one of the world’s oldest museum containing priceless treasures from around the world. (Sebastian Kahnert/dpa via AP)

“Whatever the value is, if these items are broken down or sold individually, they would be worth pennies compared to their true value and the important thing is to get them back intact,” Julian Radcliffe, chairman of The Art Loss Register, told NBC News.

Police, meanwhile, are trying to determine if the thieves set fire to an electrical junction box near the museum that took out the streetlights at the time of the robbery, said Volker Lange, head of the law enforcement probe.

He said the outage affected lights in front of a window through which the thieves gained entrance, somehow getting through bars and safety glass.