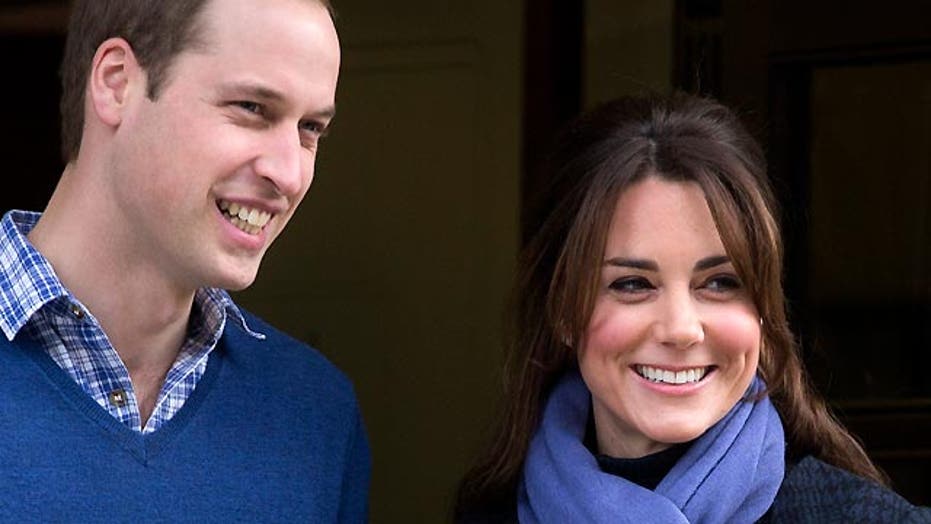 Duchess of Cambridge delivers a boy

Several hours later, William issued a brief statement saying, "we could not be happier."

Both mother and child were reported doing well and will remain in the hospital overnight.

Prince William was present for the birth at 4:24 p.m., according to a press release from the royal household.

The release also said the name of the baby, the couple’s first, would be announced “in due course.” That could be a while: it took a week to learn William's name and a month to learn Charles'.

The baby will be third in line to the throne after his grandfather, Prince Charles, and his father.

Prince Charles issued a statement Monday night saying, "Both my wife and I are overjoyed at the arrival of my first grandchild. It is an incredibly special moment for William and Catherine and we are so thrilled for them on the birth of their baby boy.

"Grandparenthood is a unique moment in anyone's life, as countless kind people have told me in recent months, so I am enormously proud and happy to be a grandfather for the first time and we are eagerly looking forward to seeing the baby in the near future."

Outside the hospital, a man dressed as a town crier in traditional robes and an extravagant feathered hat shouted the news and rang a bell.

A car carrying the announcement drove from the hospital to the palace, where the news was greeted with shrieks of "It's a boy!" and strains of "For He's a Jolly Good Fellow." A large crowd rushed against the palace fences to catch a glimpse of an ornate, gilded easel displaying a small bulletin formally announcing the news.

The framed sheet of paper became the target of a thousand camera flashes as people thrust their smartphones through the railings.

Hours after the initial announcement, crowds were still surging forward to get near the easel. Some placed presents and bouquets in front of the palace, while others waved Union Jack flags and partied on the streets to celebrate.

The Duke and Duchess of Cambridge arrived at St. Mary’s Hospital – where William and his brother Harry also were born – early Monday morning.

It was not immediately clear how long labor lasted or whether the child was delivered by natural birth or caesarian section.

Representatives of the world's press had been gathered for days outside of St. Mary's Hospital. The Duchess' exact due date had been a closely guarded secret, but the general sense was that the royal baby's arrival was overdue by at least one or two days.

Despite a rough start to the pregnancy, when she was hospitalized for acute morning sickness, the 31-year-old Kate made a number of public appearances that were halted only near the end of her term.

In Washington, President Obama issued a statement Monday night congratulating William and Kate "on the joyous occasion...we wish them all the happiness and blessings parenthood brings."