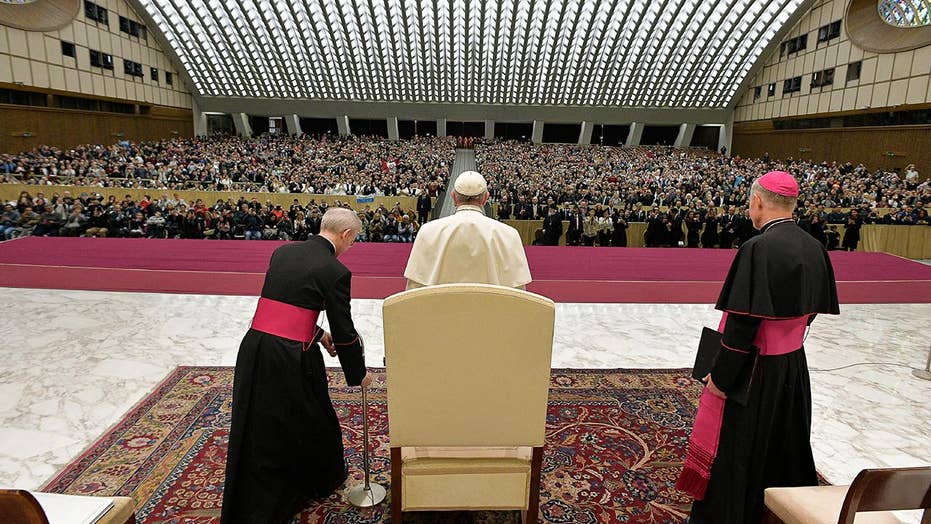 Amy Kellogg gets an inside look at the security precautions.

Some say Italians have the mafia to thank for something.

So far, Italy has not seen the sorts of attacks carried out in Paris and other European cities. Some speculation is the mafia doesn’t want more trouble on its turf, more police, and more of a spotlight, so they have taken a big role in squeezing terrorists.

Others say the fact that Italy’s role in the coalition against ISIS has been low key compared to other countries has kept Italy out of the crosshairs of terrorist revenge.

“My argument, in a nutshell,” Alessandro Orsini, a terrorism expert at Luiss University in Rome, told Fox News, “is that ISIS leaders do not attack Italy because Italy does not attack ISIS leaders.”

Professor has theory on why ISIS hasn't attacked Italy

Orsini said ISIS has stayed out of Italy because, while it did send troopers to Iraq to fight ISIS, the country has not taken part in bombing raids aimed at wiping out the terrorist group.

“Italy joined the anti-ISIS coalition of fighting in the Middle East but Italy made it clear on numerous occasions that it has no intention of bombing ISIS strongholds and,” Orsini said, “as a result, Italy has never killed ISIS leaders.”

But Massimo Improta, the head of Rome’s police, said Italy is certainly not resting on its laurels. He said the reason Italy has been spared could be pure luck.

A propaganda poster by ISIS threatens to attack the Vatican Christmas week. Italy says it takes all threats seriously, and was preparing itself for possible attacks even before the recent threat.

“There is no why,” he said when asked why Italy has so far emerged unscathed. “The risk of attacks is possible.”

And possible it is. A propaganda poster by ISIS threatens to attack the Vatican Christmas week – and now the country is on a high alert, just like the rest of Europe. Italy says it takes all threats seriously, and was preparing itself for possible attacks even before the recent threat.

“The Ministry of Interior raised the threat level after the Bataclan (theater) attack in Paris to two. Level two means there could potentially, even probably, be an attack,” Improta said. “So all our activities correspond to that level two of security. That means tight control of all subway stations, railway stations and airports. Also, the use of the military for surveillance, to back up the police.”

In Italy, the presence of army jeeps, soldiers and police from various branches of law enforcement is dramatic. And there are untold legions of plainclothes officers roaming the streets.

Patrols on the road have increased four-fold in the past decade. Improta told Fox you can never ensure 100 hundred percent security. But Italy is doing its best to make it as hard as possible for anyone to carry out an atrocity here.

So far, Italy has not seen the sorts of attacks carried out in Paris and other European cities. Some speculation is the mafia doesn’t want more trouble on its turf, more police, and more of a spotlight, so they have taken a big role in squeezing terrorists. Others say the fact that Italy’s role in the coalition against ISIS has been low key compared to other countries has kept Italy out of the crosshairs of terrorist revenge. (REUTERS)

Improta gave Fox News a tour of his headquarters. There are two rooms with big screens of the most important spots around Rome, the most sensitive, the most heavily trafficked. Cameras send back images. Police scrutinize them, watching the activity.
Outside of the headquarters, a member of Improta’s team radios that there is a suspicious package—an abandoned knapsack-- at Termini station. Specialist teams are checking it out. When Fox News arrives to see what is happening, we see this clearly empty, flat black bag in a parking lot. It looked like probably somebody stole it, emptied it, and disposed of it. But in these times, police don’t take chances. A specialist in a bomb squad suit, big and bulky, saunters over to the package after dogs do an initial sniff around the parking lot. It turns out to be nothing.

We carry on through Rome, past monuments, over cobblestones, around churches, and we see police everywhere.

Improta says that what is done in Italy is on a par with the rest of Europe, that all countries share intelligence and methods.

He admits that Italy has vast experience in monitoring and surveillance from its years fighting domestic terrorism, the Red Brigades, in the 1970s, and from a lifetime with the mafia. Italy is, by many accounts, very good at listening in.

The problem with some of today’s terrorists is that they are not part of an organized cell, so it is hard to burrow in.

Italy is also quick to deport anyone with radical tendencies. The law has been altered to allow that. This year alone, more than 100 terror suspects have been kicked out of Italy.

This country is known for its hospitality to vis-à-vis refugees. To an extent, it has no choice but to welcome them because they arrive here by sea. But this poses another security challenge. Improta says a lot of intelligence sharing is involved in trying to make out who is who, and to ensure that those given shelter here are not plotting against this country or Europe.

Italy knows terrorists transit through here, if not on boats, then across Europe’s often control-free borders. The Berlin Christmas market murderer, who drove a truck into crowds last year at this time, was ultimately picked up, and killed, in Milan. Anis Amri had been radicalized, many believe, in a Sicilian jail many years before.