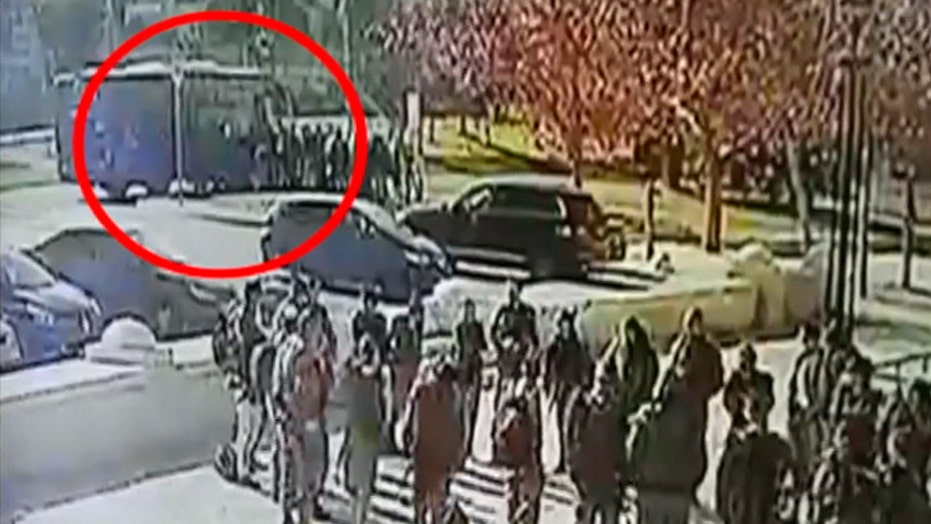 Israeli police stepped up security measures in Arab neighborhoods in east Jerusalem on Monday, searching trucks and arresting relatives of the Palestinian truck driver who rammed his vehicle into a crowd of Israeli soldiers at a Jerusalem tourist spot the previous day, killing four soldiers and injuring 17 others.

Nine people were arrested, five of them relatives of 28-year-old Fadi Qunbar, the attacker. All arrested were from the Jabel Mukaber neighborhood of east Jerusalem where Qunbar lived, police said.

An investigation is underway as to how Qunbar managed to make his way on Sunday to the Jerusalem promenade where the soldiers gathered; who owned the truck he drove and whether he planned his attack ahead of time, Rosenfeld said.

Police used concrete slabs to block some entrances of Jabel Mukaber, and a police officer checked cars leaving it. Israeli special forces dismantled a mourning tent erected to receive visitors paying respects for Qunbar, who was fatally shot at the scene of the attack. Overnight, police say, Palestinians shot fireworks at Israeli forces at a police post near the neighborhood.

Israeli Prime Minister Benjamin Netanyahu said authorities would increase the number of concrete barricades along Jerusalem roads where pedestrians gather, to protect them from similar attacks by vehicles, and that Israeli security agencies are working on ways to detect attackers ahead of time.

"We are under a new kind of attack, the lone attacker that gets inspiration and decides in a moment to act," Netanyahu said.

Mohammed Qunbar, the attacker's cousin, said Fadi lived a normal life but carried out the attack as a result of Palestinian anger over what is seen as Israeli encroachment at Jerusalem's most sensitive holy site. Jews revere it as the Temple Mount, and Muslims call it the Noble Sanctuary and the site of the Al-Aqsa Mosque. It has been a frequent scene of violence in the past, as Palestinians have accused Israel of secretly plotting to take over the site, which Israel denies.

"What happened is a normal thing," Qunbar said of his cousin. "After all, this is a response to what is happening at Al-Aqsa. He was very connected to Al-Aqsa."

The attack was one of the deadliest in more than a year of Israeli-Palestinian violence. Since September 2015, Palestinian attackers have killed 40 Israelis and two visiting Americans in knife attacks, shootings and assaults using cars to ram into people. During that time, 230 Palestinians have been killed by Israeli fire.

The toll from Sunday's attack matched that of the deadliest previous assault -- the Tel Aviv shooting last June that was carried out by a pair of gunmen at a popular tourist spot.

Israel says most of the Palestinians killed over the past 16 months were attackers. The Palestinians and rights groups say Israel has at times used excessive force.

Israel says the violence is driven by Palestinian incitement, while Palestinians say it's the result of nearly 50 years of Israeli occupation and dwindling hopes for an independent state. The violence has slowed in recent months.

The attack came as tensions have been rising in the combustible city following a series of statements by people close to President-elect Donald Trump that he is determined to move the U.S. Embassy to Jerusalem. The United States, like other countries, keeps its embassy in Tel Aviv, saying the fate of Jerusalem must be decided in negotiations between Israel and the Palestinians.

Israel claims the entire city as its capital. The Palestinians seek east Jerusalem, captured by Israel in the 1967 Mideast war, as the capital of a future state. Israel has annexed the eastern sector, home to the Old City and sensitive holy sites, and says it will never allow the city to be divided.

Meanwhile, the mood in Israel has been charged following last week's manslaughter conviction in a military court of a soldier who killed a badly wounded Palestinian assailant last March as he lay on the ground. The soldier's sentencing is due next week.