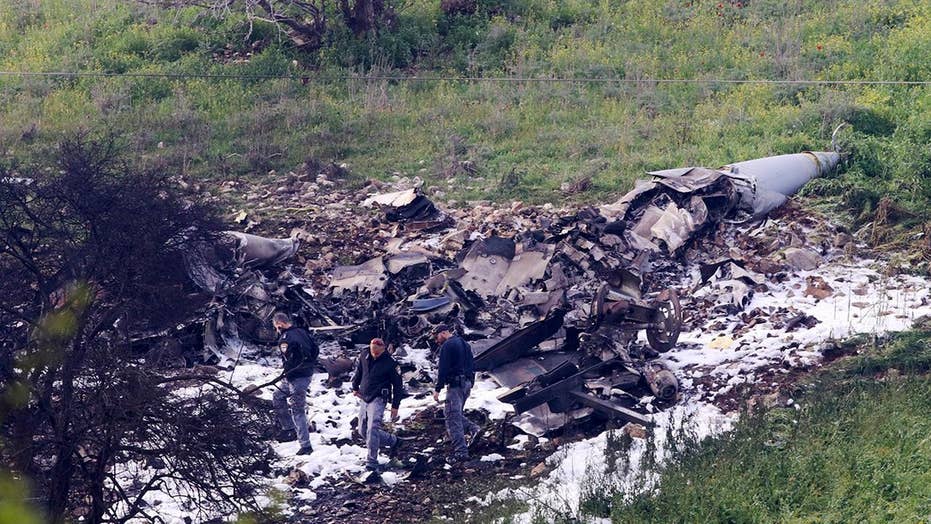 David Lee Miller reports on conflict between the countries.

Israel Prime Minister Benjamin Netanyahu said Israel will protect itself from “any threat or any attempt to harm its sovereignty” after its military downed an Iranian drone that infiltrated the region.

“Israel is seeking for peace, but we will continue to defend ourselves against any attack against us, and against any attempt by Iran to establish military bases in Syria or anywhere else,” Netanyahu said Saturday after meeting with top brass at military headquarters in Tel Aviv.

He said had spoken with both Russian President Vladimir Putin and U.S. Secretary of State Rex Tillerson about the recent involvement.

The State Department issued a statement Saturday stating that the U.S. "strongly supports Israel's sovereign right to defend itself."

"Iran's calculated escalation of threat and its ambition to project its power and dominance, places all the people of the‎ region - from Yemen to Lebanon - at risk.‎ The U.S. continues to push back on the totality of Iran's malign activities in the region and calls for an end to Iranian behavior that threatens peace and stability," the statement read.

Israel’s military launched a “large-scale attack” after shooting down the infiltrating drone and struck Iranian targets deep in Syrian before one of its own jets was downed.

The raids hit at least 12 targets, including three aerial defense batteries and four targets that were part of Iran’s military establishment in Syria. The offensive marks Israel’s most substantial involvement in Syria to date.

Israel has issued several stern warnings of late about the increased Iranian involvement along its border in Syria and Lebanon.

Investigators inspect the wreckage of an F-16 that crashed in northern Israel. (AP)

Israel called the drone infiltration a “severe and irregular violation of Israeli sovereignty” and warned that Iran would be held accountable for its meddling.

"This is a serious Iranian attack on Israeli territory. Iran is dragging the region into an adventure in which it doesn't know how it will end," Israel's chief military spokesman, Brig. Gen. Ronen Manelis, said in a special statement. "Whoever is responsible for this incident is the one who will pay the price."

Israel would not confirm whether the aircraft was actually shot down by enemy fire, which would mark the first such instance for Israel since 1982 during the first Lebanon war.

According to Syrian state TV, which quoted a military official, Syrian air defenses struck more than one Israeli plane, and called the Israeli raids that hit a base a “new Israeli aggression.”

The Israeli military shot down an Iranian drone that infiltrated the country on Saturday, Feb. 10, 2018. (AP)

Military spokesman Jonathan Conricus said the drone was "on a military mission sent and operated by Iranian military forces" and that Iran was "responsible for this severe violation of Israeli sovereignty."

The drone was in Israel's possession, the military said.

Although Israel has shot down several drones from Syria that have infiltrated the country’s territory in the past, the attack on an Iranian site in response to Saturday’s incident signals an escalation in the Israeli retaliation.

The military confirmed the Syrian target of the drone’s launch components were destroyed.

Iran denied Israel's shooting down of a drone, with Foreign Ministry spokesman Bahram Ghasem calling the account "ridiculous," while the joint operations room for the Syrian military and its allies insisted the drone had not violated Israeli airspace and was on a regular mission gathering intelligence on Islamic State militants.

Iranian involvement along Israel’s border in Syria and Lebanon has been a growing concern as it fears Iran could use the region to position attacks or develop a land route from the country to Lebanon in an effort to deliver weapons to Hezbollah more efficiently.

But Israel has refrained from striking Iranian sites directly. Syria has also repeatedly said it will respond to Israeli airstrikes but has rarely returned fire. Both of those trends came to an abrupt end Saturday as a rapid escalation played out in the early morning hours.

"This is a serious Iranian attack on Israeli territory. Iran is dragging the region into an adventure in which it doesn't know how it will end," he said in a special statement. "Whoever is responsible for this incident is the one who will pay the price."

However, the joint operations room for the Syrian military and its allies denied the drone violated Israeli airspace, saying it was on a regular mission gathering intelligence on Islamic State militants.

Russia, which backs Assad and maintains a large military presence in the country, called for restraint and appeared to criticize Israel's actions.

"It is absolutely unacceptable to create threats to the lives and security of Russian servicemen who are in Syria at the invitation of its legitimate government to assist in the fight against terrorists," Russia's foreign ministry said.

Fox News' Yonat Friling and the Associated Press contributed to this report.