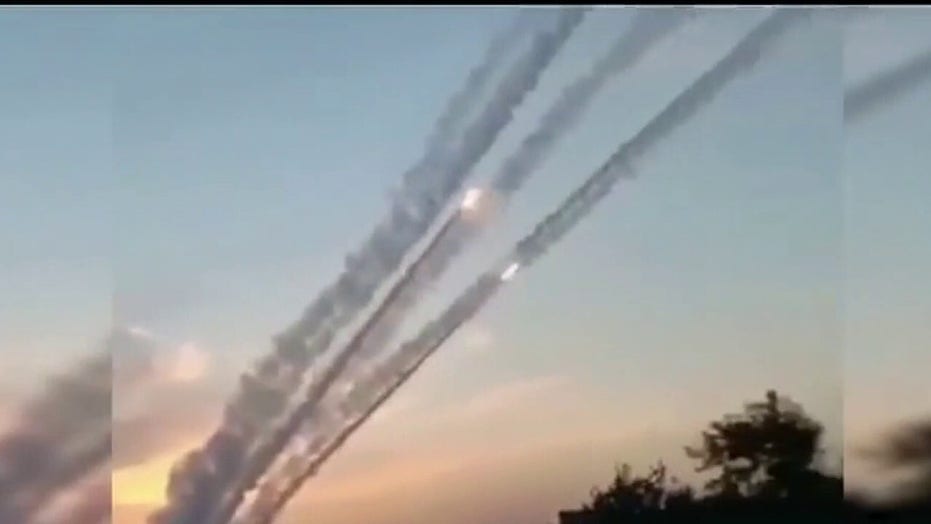 Palestinian militants fired approximately 30 rockets into Israel on Sunday evening, Israeli military officials said, near the end of a tense weekend that also saw Palestinian militants apparently trying to plant a bomb at the Gaza border, along with Israeli strikes hitting targets in Gaza and Syria.

A Palestinian Islamic Jihad group claimed responsibility for the rocket attack on Israel.

Earlier, two Palestinian militants approached the fence on the northern side of the Gaza border, appearing to plant a bomb. Israeli defense forces opened fire, killing one of the militants -- who was said to have belonged to the Islamic Jihad group.

Israeli military officials then sent a tank and front loader into the Gaza strip and scooped up the body using a shovel attached to the vehicle, an image that quickly circulated on social media and caused Hamas to cry foul and accuse Israel of abusing the body.

Israeli Defense Minister Naftali Bennett rejected the criticism, noting that Hamas has been holding the bodies of two Israeli soldiers since they were killed in the 2014 Gaza war.

“I back the military, which killed the terrorists and collected the body,” he said. “That's what should be done and that is what was done.”

In this frame grab from video, an Israeli military vehicle removed the body of a Palestinian militant along the Gaza-Israel border on Sunday. (AP Photo)

The rocket launch seemed to be retaliatory in nature.

Israeli defense forces said at least 10 of the rockets had been intercepted using their Iron Dome defense system while the others fell without causing major damage.

The Israeli military struck back on Islamic Jihad operatives with aircrafts, firing at an empty Palestinian training camp in the Gaza strip, and on two Palestinian rocket teams resulting in injuries among the Palestinians.

The Gaza health ministry reported that four Palestinians were treated at the Al-Shifa hospital in Gaza City for wounds resulting from the strikes.

Meanwhile, some Palestinians said Hamas rulers failed to respond forcefully enough to Israel. Hamas has been working with Egyptian mediators to arrange a cease-fire along the Gaza strip and have been holding back on attacking Israel. Despite this, Islamic Jihad has continued to try carrying out attacks in the region.

Israel and the Islamic Jihad group engaged in a heavy round of fighting last November after the Israeli military killed a top Islamic Jihad commander, but the region has remained relatively quiet in recent months leading up to Sunday's attack.

In a rare acknowledgment of operations in neighboring Syria, Israeli officials also said their warplanes attacked targets of the Islamic Jihad group south of Damascus in addition to Gaza. They said the sites had been used for "research and development of armaments" manufactured in Syria and the Gaza Strip, and also produced dozens of kilograms of rocket fuel each month.

Fox News' Mike Tobin and the Associated Press contributed to this report.