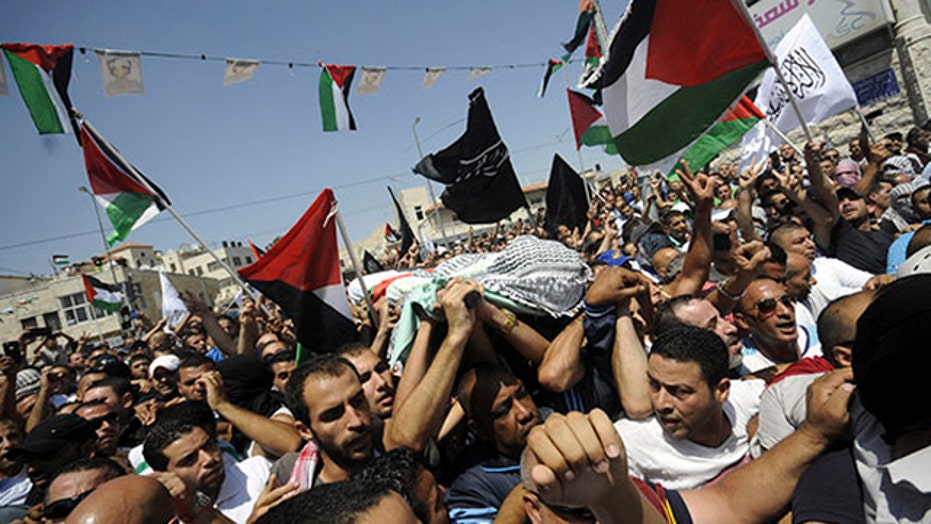 Israel vs. Hamas: 'We will get them'

Israel warned residents of the northern part of the Gaza Strip to evacuate their homes before briefly deploying ground troops there for the first time early Sunday as part of a widening offensive that has killed more than 160 Palestinians.

Neither Israel nor Palestinian militants show signs of agreeing to a cease-fire to end their weeklong conflict, despite calls by the United Nations Security Council and others that they lay down their arms. With Israel massing tanks and soldiers at Gaza's borders, some fear the latest Israeli threats could signal a wider ground offensive that would bring even heavier casualties than the 166 Palestinian deaths already registered.

"All our ground forces are ready," a senior Israeli military official said Sunday. "We have been training for this. We will exploit our ability the moment a decision is made to do so."

Early Sunday, Israeli naval commandos launched a brief raid into northern Gaza to destroy what the military described as a rocket-launching site, an operation it said left four of its soldiers slightly wounded.

The Israeli air force later dropped leaflets warning residents to evacuate their homes ahead of what Israel's military spokesman described as a "short and temporary" campaign against northern Gaza to begin sometime after 12 p.m. (0900 GMT). The area is home to at least 100,000 people.

It was not clear whether the possible attack would be confined to stepped-up airstrikes or whether it might include a sizeable ground offensive -- something that Israel has so far been reluctant to undertake.

As the ultimatum drew near, hundreds fled Beit Lahiya, one of the communities the Israeli announcement affected. Some raced by in pickup trucks, waving white flags.

"They are sending warning messages," resident Mohammad Abu Halemah said. "Once we received the message, we felt scared to stay in our homes. We want to leave."

Adnan Abu Hassna, a spokesman for the U.N. agency in charge of aiding Palestinian refugees, said eight schools were opened as temporary shelters, and about 4,000 people had moved in. He said more schools would be opened if needed.

Essam Al Sultan, 46, a farmer from Beit Lahiya said he had taken the decision to flee the area because the youngest of his eight children had been terrorized by the constant sound of explosions in and around their community.

`For me I don't fear death because we are dying every single moment of this war but I left because I want to protect my family," he said.

Ignoring international appeals for a cease-fire, Israel widened its range of Gaza bombing targets Saturday to include civilian institutions with suspected Hamas ties. One strike hit a center for the disabled, killing two patients and wounding four people. In a second attack, an Israeli air strike flattened the home of a cousin of Gaza police chief Taysir al-Batsh and damaged a nearby mosque as evening prayers ended, killing at least 18 people. Fifty were wounded, including al-Batsh himself, who had earlier received warnings that he was an Israeli target and had moved away from his own home.

On Sunday, hundreds chanting "God is Great" joined the funeral procession for 17 members of al-Batsh's extended family who were killed. Among the dead were his cousin and her husband, along with the couple's seven children, ranging in age from 13 to 28. A neighbor also was killed.

Mourners carried the bodies, wrapped in the green flags of the Islamic militant Hamas, through the streets on stretchers.

The attack reduced al-Batsh's cousin's home to sand and rubble. Ahmad al-Batsh, a nephew of the police chief, said Israel had not given a warning before the strike.

Hamas activists said the group's military wing had asked the families of its members to leave their homes, after Israel targeted several such homes in a series of airstrikes.

On Sunday, Palestinians with foreign passports began leaving Gaza through the Erez border crossing. Israel, which is cooperating in the evacuation, said 800 Palestinians living in Gaza have passports from countries including Australia, the United Kingdom and the U.S.

Rawan Mohanna, a 21-year-old chemistry major at the University of Texas, said she had arrived in Gaza with her family a month ago because her older sister was getting married to a Gazan.

"We got the wedding out of the way before all of this happened," Mohanna said. Mohanna, who lives in Dallas, said her family is now returning to the U.S. with mixed feelings because her newlywed sister and other relatives were staying behind.

"We are so fortunate ... that we have the right to travel," she said. "People in Gaza, they can't even leave, and that's such a basic right. It's stripped away from them. It's bittersweet that we get to leave but they are still there and they can't get out."

Israel has said it's acting in self-defense against rockets that have disrupted life across much of the country. It also accuses Hamas of using Gaza's civilians as human shields by firing rockets from there.

Critics say Israel's heavy bombardment of one of the most densely populated territories in the world is itself the main factor putting civilians at risk.

The offensive marks the heaviest fighting since a similar eight-day campaign in November 2012 to stop Gaza rocket fire. The outbreak of violence follows the kidnappings and killings of three Israeli teenagers in the West Bank, the kidnapping and killing of a Palestinian teenager in an apparent revenge attack, and wide-ranging Israeli moves against Hamas militants and infrastructure in the West Bank.

Foreign diplomats also continued their efforts to end the bloodshed. German Foreign Minister Frank-Walter Steinmeier will fly to Israel for talks Monday and Tuesday with both the Israelis and the Palestinians. Meanwhile, the Arab League will meet Monday to discuss the offensive.

In the West Bank city of Ramallah, Palestinian President Mahmoud Abbas said he had appealed to U.N. Secretary-General Bank Ki-moon for "international protection" for the Palestinian people.

"The situation has become unbearable -- hundreds of martyrs and thousands of wounded and huge destruction," Abbas said. Despite forming a government with Hamas' backing last month, Abbas' influence in Gaza is minimal.

Seven trucks carrying humanitarian aid arrived in Gaza from Egypt on Sunday. Relations between Egypt and Hamas have cooled considerably in the wake of the Abdel Fattah el-Sissi's ascension to power in Cairo earlier this year, but the new Egyptian government has been steadfast in providing civilian assistance to Gaza since the Israeli operation against Hamas began.