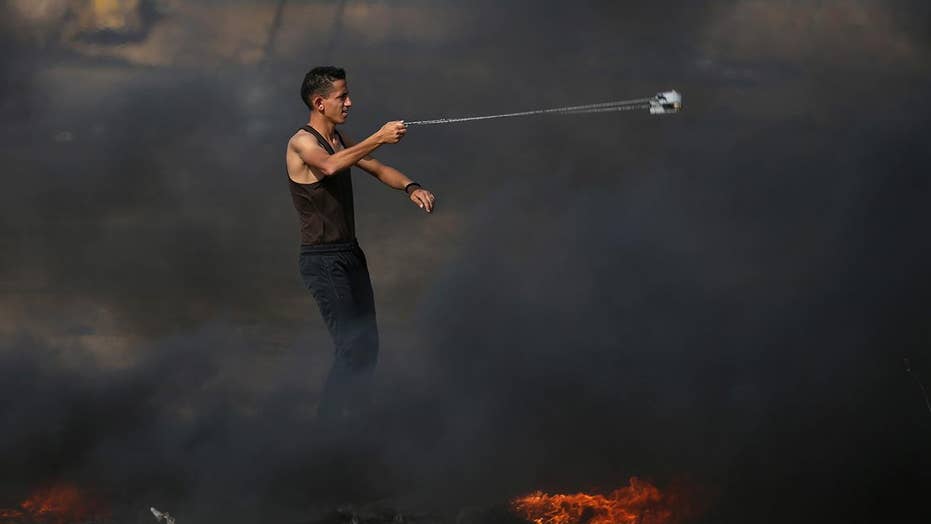 The Israel-Gaza border braces for more protests as Muslims observe the first Friday of Ramadan as Hamas calls on their people to restart demonstrations; David Lee Miller reports from Israel.

Israeli jets bombarded militant position in Gaza on Tuesday hours after more than two dozen mortar shells were launched at the Jewish State in what appears to be the largest single barrage since the 2014 Israel-Hamas war.

The Israeli military said no one was hurt by the 25 mortar shells launched into its territory as most were intercepted by its Iron Dome missile defense system, although one of them landed near a kindergarten shortly before it opened.

The retaliatory strikes by Israel’s armed forces were aimed at a training site for the Islamic Jihad militant group, believed to be behind the Tuesday mortar barrage with the approval of Hamas, the Associated Press reported, citing security officials in the Gaza Strip. Smoke was seen rising near the town of Deir al-Balah and the Israeli military said the explosions there were related to its activity. No injuries were reported.

"Israel will exact a heavy price from those who seek to harm it and we see Hamas as responsible for preventing such attacks," Prime Minister Benjamin Netanyahu said following the barrage.

The border area has been tense in recent weeks as the Palestinians have held mass protests aimed at lifting a blockade imposed by Israel and Egypt after Hamas seized power in 2007.

"We are sticking to the right of return as well as responding to the Zionist crimes," Khaled al-Batsh, an Islamic Jihad leader in Gaza, said Tuesday, according to the Associated Press.

Israeli fire has killed more than 110 Palestinians, most of them during the Hamas-led protests, which climaxed on May 14. Reuters reported that Israeli tank fire killed a Hamas fighter on Monday at a frontier outpost.

Hamas, however, has vowed to continue the border rallies. Israel says it is defending its border as well as its communities nearby. It accuses Hamas of trying to carry out attacks under the cover of protests.

Ismail Radwan, a Hamas official, said Tuesday’s barrage proved that the "resistance is capable of hurting the occupation and it proved this today by responding to its crimes."

He spoke as a two fishing boats carrying students and medical patients set sail out of Gaza City's port, aiming to break 11 years of naval blockade that Egypt and Israel imposed after the militants violently took control of the coastal territory.

The expedition would be a new way of challenging the blockade but also raises the possibility of more confrontation and violence as Israel bars any boats from Gaza reaching farther out than a six-nautical-mile radius into the Mediterranean Sea. Hamas acknowledged it was mostly a symbolic act.

In southern Israel, angry residents complained to the Associated Press about how vulnerable they felt after 15 years of rocket fire threats from neighboring Gaza.

Adva Klein, a resident of Kibbutz Kfar Aza, said she only got about two hours of sleep because of the frequent incoming fire and the sirens warning of them. Other residents reported machine gun fire from Gaza as well.

"It's been a really scary morning," said Adele Raemer, a resident of Kibbutz Nirim.

Defense Minister Avigdor Lieberman said he was convening the top military brass at his Tel Aviv headquarters to discuss the situation.