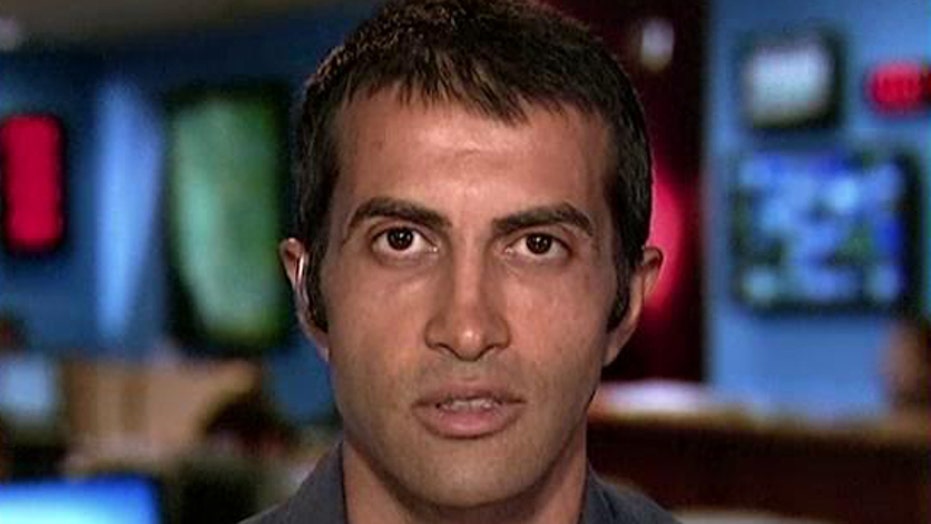 Mosab Hassan Yousef speaks out about the crisis

Israel bombarded the southern Gaza town of Rafah on Saturday as troops searched for an officer they believe was captured by Hamas in an ambush that shattered a humanitarian cease-fire and set the stage for a major escalation of the 26-day-old war.

The Israeli military has said it believes the soldier was grabbed in a Hamas ambush about an hour after an internationally brokered cease-fire took effect Friday morning. The Hamas military wing on Saturday tried to distance itself from the soldier's alleged capture, which has prompted widespread international condemnation. President Barack Obama, U.N. chief Ban Ki-moon and others have accused Hamas of violating the cease-fire and have called for the soldier's immediate and unconditional release.

At least 35 Palestinians were killed in the bombardment and shelling in and around the city of Rafah early Saturday, said Palestinian health official Ashraf al-Kidra, adding that the area's main hospital was evacuated because of the strikes, which killed dozens of people on Friday.

Elsewhere in Gaza, Palestinian officials reported more than 150 airstrikes including one against the Hamas-linked Islamic University in Gaza City. Heavy shelling continued along the border areas.

The fiercest battles took place near the site of Friday's attack and purported abduction, near Rafah, about 3 kilometers inside the strip and close to the borders with Israel and Egypt. Officials have reported that dozens of houses have been damaged or destroyed in airstrikes.

The Hamas military wing said on its website that it is "not aware until this moment of a missing soldier or his whereabouts or the circumstances of his disappearance."

The group said it believes the soldier might have been killed in a clash with Hamas fighters about an hour before the start of the 8:00 a.m. (0500 GMT) cease-fire, and that it had lost contact with the fighters.

"We believe all members of this group have died in an (Israeli) strike, including the Zionist soldier the enemy says disappeared," it said.

Hamas could be withholding information about the soldier in order to extract concessions from Israel, a strategy used in the past by the Lebanese Hezbollah group, which did not disclose whether two Israeli soldiers it seized in 2006 were alive or dead until their remains were handed over in a prisoner exchange.

The Israeli Cabinet met for an exceptionally long and rare Friday night session to discuss the missing soldier. There was no immediate announcement on a course of action, but an official in the prime minister's office said Israel "expects the United States and the international community to respond strongly to a terror organization that so blatantly defies them."

The official, who spoke anonymously because there was no official Israeli announcement, said "Hamas and other terror groups will bear the consequences of their actions."

The disappearance of the soldier, 2nd Lt. Hadar Goldin, and the heavy clashes that followed it shattered an internationally brokered cease-fire that was to have been in place for three days and open the way for talks in Cairo on a more sustainable truce. Israel and Hamas have accused each other of violating the humanitarian pause.

Israel launched an aerial offensive on July 8 to stop unrelenting Gaza rocket fire toward its cities and communities and later expanded it to a ground offensive mostly aimed at destroying an elaborate Hamas cross-border tunnel network used for attacks inside Israel.

A senior IDF officer said Saturday morning that the army is "very close to completing" its mission of destroying tunnels in the strip, Haaretz reported. Four tunnels have been destroyed in the past 24 hours, the officer said.

Since fighting began on July 8, more than 1,650 Palestinians — mostly civilians — have been killed and more than 8,000 wounded, according al-Kidra. Israel has lost 63 soldiers and three civilians, its highest death toll since the 2006 Lebanon war.

The prospect of an abducted soldier struck a particularly raw nerve in Israel and looked to further escalate the fighting.

Israel has gone to great lengths in the past to get back its captured soldiers. In 2011, it traded hundreds of Palestinian prisoners for an Israeli soldier who had been captured by Hamas and other militants five years earlier. Hezbollah's capture of the two soldiers in a cross-border operation in 2006 sparked a 34-day war between the Iran-backed Shiite group and Israel. Israel later traded Lebanese prisoners for their bodies.

The Israeli military accused Hamas of flagrantly violating Friday's cease-fire. Goldin disappeared in an ambush about an hour after the cease-fire began, when gunmen emerged from one or more Gaza tunnels and opened fire at Israeli soldiers, with at least one of the militants detonating an explosives vest, said Israeli army spokesman Lt. Col. Peter Lerner.

Goldin, a 23-year-old from the central Israeli city of Kfar Saba, was apparently captured in the ensuing mayhem, while another two Israeli soldiers were killed. "We suspect that he has been kidnapped," Lerner said.

Outside the family's home, just a block away from the city's military cemetery, which has already seen one funeral of a Kfar Saba soldier from the fighting in Gaza, family and friends gathered and later went to an adjacent synagogue to pray for the soldier's safe return.

Goldin, who was recently engaged to get married, also has a twin brother in the military on the Gaza front-lines.

The officer's father, Simha Goldin, said he expects Israel to "not stop before it turns over every stone in Gaza and returns Hadar home safe and sound."