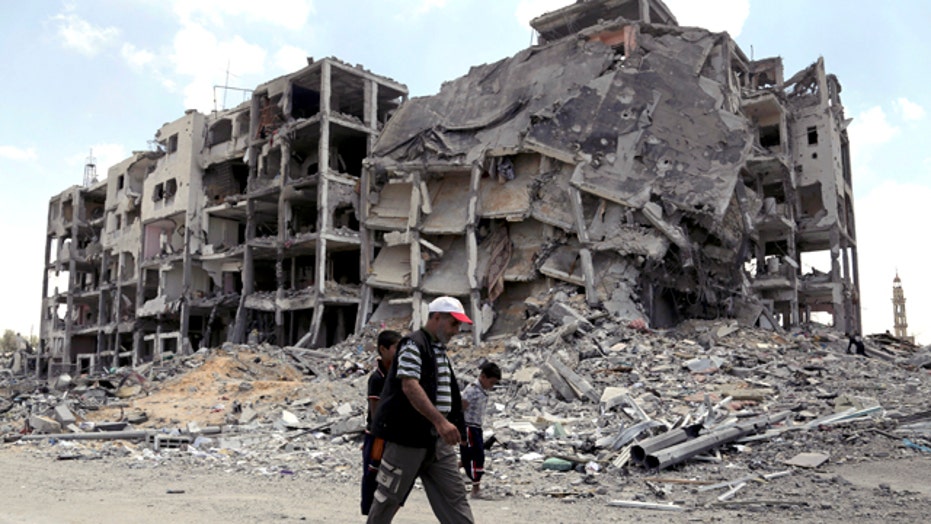 Are Israel, Hamas close to a permanent ceasefire?

Israel has accepted a new 72-hour truce with Hamas that is set to begin Tuesday, a senior Israeli official told Fox News, after considering pulling its forces out of the Gaza Strip without a cease-fire deal.

The cease-fire will start at 8 a.m. local time (1 a.m. ET) and a Palestinian delegation in Cairo confirmed it has accepted the truce.

An Israeli delegation will head to Egypt for talks meant to work out a long-term truce in the next three days.

Another Israeli official, who spoke to The Associated Press, said Israel will be watching "with a certain amount of skepticism," since previous cease-fire plans have quickly collapsed.

He spoke on condition of anonymity pending a formal announcement by the Israeli government.

The senior Israeli official who spoke to Fox News said earlier Monday that Israel is considering pulling out from Gaza unilaterally without a cease-fire agreement with Hamas, but would strike the militant group if it fired rockets again.

Israel already has been drawing down its ground operation since the weekend, but has kept up heavy aerial, offshore and artillery bombardments of the strip. The Gaza war, now in its fourth week, has left more than 1,800 Palestinians and 60 Israelis dead. However, it is unclear how many of the Palestinian dead are civilians.

On Monday, an Israeli soldier in Jerusalem was shot and seriously wounded by a gunman on a motorcycle near the closing of a seven-hour humanitarian cease-fire window, according to Israeli media reports.

“Multiple shots were fired, one man was hit in the stomach and rushed to the hospital in serious condition,” he told the Jerusalem Post.

Shortly before the reported attack, the lull in the Gaza Strip fighting between Israel and Hamas was broken by an assault in Jerusalem in which a man rammed the front end of a construction excavator into an Israeli bus.

The attack occurred on a main thoroughfare near Jerusalem's light-rail line. The area is located near the unofficial line between Jewish West Jerusalem and east Jerusalem, the section of the city captured by Israel in 1967 and which is home to most of the city's Arab population. Israeli media said the attacker came from an Arab area of the city.

Israel's Channel 10 TV showed cellphone video of what it said was the attack, with the yellow excavator slamming its large shovel into the bus. Rosenfeld said a police officer in the area opened fire and killed the attacker. A pedestrian also was killed, according to Jerusalem district police chief Yossi Piranti.

"Because of the quick reaction of the police, an even graver incident was avoided," Piranti said.

An Israeli airstrike also killed a leader of the Islamic Jihad militant group on Monday.

The group said that its commander in the northern part of the strip, Daniel Mansour, died when the Israeli strike hit his home just before dawn Monday. The Islamic Jihad group is an ally of Hamas, which controls the Gaza Strip. However, The Wall Street Journal reported that Islamic Jihad may be using the present fighting to increase its clout in the region.

U.S. and Israeli officials told the paper that Islamic Jihad has closer ties to Iran than Hamas, and said the group might have been pressured by Iran to continue fighting in defiance of any truce.

The Journal reported Monday that U.S. officials are concerned that divisions between the political and military wings of Hamas have contributed to difficulties in securing a lasting cease-fire. Since most of the militant group's political leaders -- who are more likely to support a truce -- live outside of Gaza, officials and analysts say that it is possible that their messages are not being transmitted quickly enough to fighters on the ground.

Israel launched its military operation in Gaza on July 8 in response to weeks of heavy rocket fire and has since carried out more than 4,600 airstrikes across the crowded seaside territory. It sent in ground forces on July 17 in what it said was a mission to destroy the tunnels used by Hamas to carry out attacks inside Israel.

Since the fighting erupted, Hamas has fired more than 3,200 rockets into Israel, many of them intercepted by Israel's Iron Dome defense system.

The Gaza police said Israeli Navy boats also approached the northern coast of the strip and soldiers tried to land in the area. On the ground, there were clashes in the southern town of Rafah and southeast of Gaza City, they said. The Israeli military had no immediate comment.

U.N. officials claim more than three-quarters of the dead in the war have been civilians, including the 10 people killed Sunday at a U.N. school that has been converted into a shelter in the southern Gaza Strip town of Rafah.

U.N. Secretary-General Ban Ki-moon called the attack a "moral outrage and a criminal act" and demanded a quick investigation, while the U.S. State Department condemned the strike in unusually strong language.

U.N. shelters in Gaza have been struck by fire seven times in the latest Israeli-Hamas round of fighting. UNRWA, the U.N. agency that assists Palestinian refugees, says Israel has been the source of fire in all instances. But it also has said it found caches of rockets in vacant UNRWA schools three times.

Israel accuses Hamas of using civilian areas for cover and says the Islamic militant group is responsible for the heavy death toll because it has been using civilians as "human shields."

Israeli artillery shells slammed into two high-rise office buildings Sunday in downtown Gaza City, police and witnesses said. Al-Kidra said more than 50 Palestinians were killed, including 10 members of one family in a single strike in the southern Gaza Strip.

Israel said that it attacked 63 sites on Sunday and that nearly 100 rockets and mortars were fired at Israel.

Fox News' Ibrahim Hazboun and The Associated Press contributed to this report.