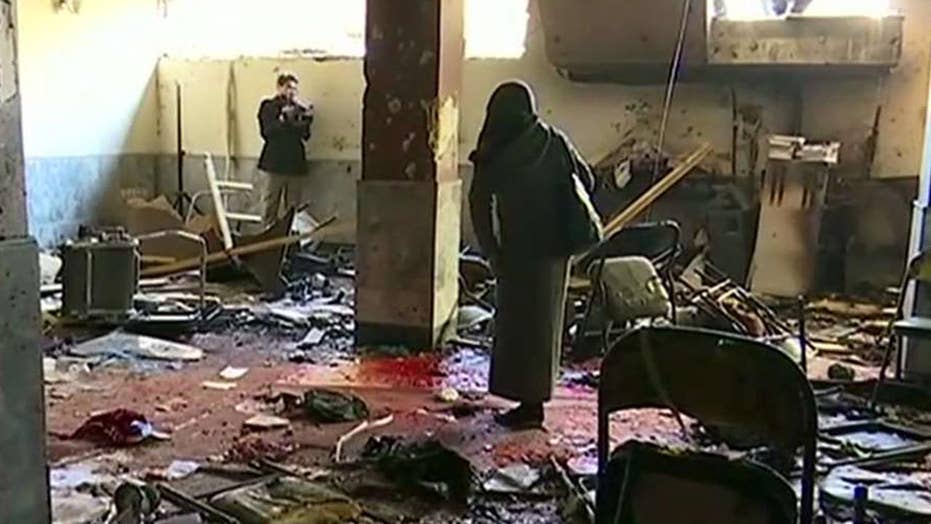 At least 41 killed in a suicide blast at a cultural center.

The Islamic State claimed responsibility for the simultaneous attack on an Afghanistan news agency and a Shiite cultural center in Kabul that left at least 41 dead and 84 wounded.

The terror group said in a statement through its propaganda agency that one suicide bomber wearing a vest carried out the attack along with three other bomb blasts, Reuters reported.

No U.S. troops or coalition force members were killed in the suicide attack.

The attack occurred during a panel discussion on the December 1979 invasion of Afghanistan by the former Soviet Union, Reuters reported, citing witnesses. A number of those attending the panel were students.

Interior Ministry spokesman Najib Danish said an unknown number of suicide attackers set off an explosion outside the center before storming the building when they set of more explosives in the basement.

At least one suicide bomber was able to sneak into the event and sit among the participants before detonating his device, Shiite leader Abdul Hussain Ramazandada said citing witnesses.

Afghan president Ashraf Ghani has called the attack on a Shiite Muslim cultural center in Kabul a "crime against humanity."

In a statement released by the presidential palace, Ghani says: "The terrorist have killed our people. The terrorists have attacked our mosques, our holy places and now our cultural center."

He called them attacks against Islam and "all human values."

The center is located in the Shiite-dominated Dasht-e-Barchi neighborhood in the west of the capital.

Earlier this year, the Islamic State vowed to target Afghanistan's Shiites following an attack on the Iraqi Embassy in Kabul. The jihadist militant group has since claimed responsibility for at least two attacks on Shiite mosques in the capital of Afghanistan, as well as one in the western city of Herat.