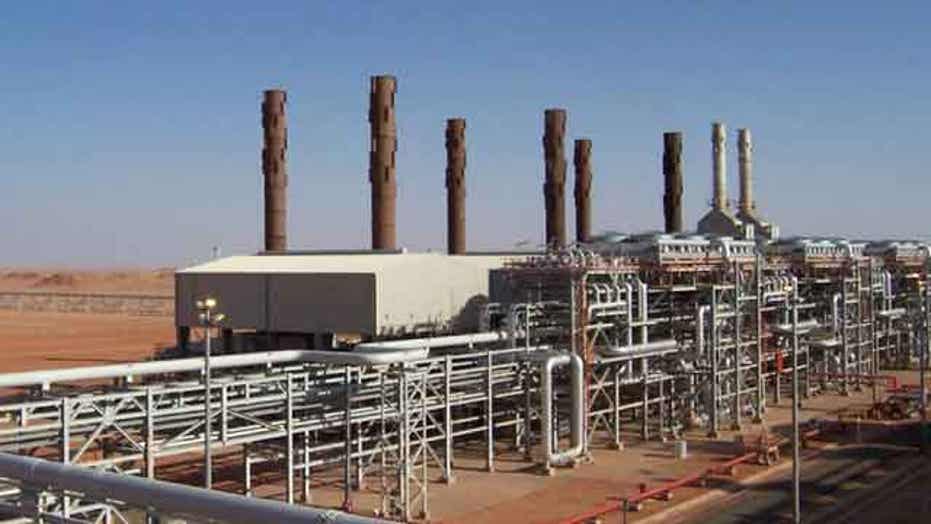 Islamic militants have reportedly offered to trade two American hostages for terror figures jailed in the United States, as a violent siege continues at a gas plant in Algeria. A Mauritanian news site that often reports news from North African extremists received a statement about the offer Friday.

An American from Texas remains missing after an Algerian military raid on the terror group reportedly ended the hostage standoff at the remote gas plant in the Saharan Desert.

Two Americans escaped unharmed Thursday, a senior U.S. defense officials told Fox News, and five other Americans who had been at the vast Ain Amenas complex were able to avoid being taken captive when the terrorists first attacked early Wednesday.

The Associated Press reports at least six people, and perhaps many more, were killed -- Britons, Filipinos and Algerians -- in the Algerians special forces' rescue mission. Dozens more remained unaccounted for, including Britons, French, Norwegians, Romanians, Malaysians, Japanese, Algerians, at least one American and the fighters themselves.

The two Americans who managed to escape before the raid are en route to London, sources told Fox News.

Britain's Foreign Office said Friday the hostage crisis in Algeria "remains ongoing" but gave no details of the situation.

At least 20 gunmen attacked and took over the complex, reportedly in retaliation for France's military intervention against Al Qaeda-linked rebels in neighboring Mali, though Fox News sources say the attack may have been planned much earlier.

The militants -- led by a Mali-based Al Qaeda offshoot known as the Masked Brigade -- suffered losses in Thursday's military assault, but succeeded in garnering a global audience.

"An important number of hostages were freed and an important number of terrorists were eliminated, and we regret the few dead and wounded," Algerian Communications Minister Mohand Said Oubelaid told national media, adding that the "terrorists are multinational," coming from several different countries with the goal of "destabilizing Algeria, embroiling it in the Mali conflict and damaging its natural gas infrastructure."

Islamists from the Masked Brigade, a Mali-based Al Qaeda offshoot, who have been speaking through a Mauritanian news outlet, said Algerian helicopters opened fire as the militants tried to leave the vast energy complex with their hostages. They claimed that 35 hostages and 15 militants died in the attack and only seven hostages survived.

The reports of high casualties have deeply disturbed foreign governments, prompting a number to criticize Algeria's operation. Britain's Foreign Office attempted to prepare the British public by saying, "We should be under no illusion that there will be some bad and distressing news to follow from this terrorist attack."

Algeria's official news service, meanwhile, earlier claimed that 600 local workers were freed in the raid and half of the foreigners being held were rescued. Many of those locals were reportedly released on Wednesday, however, by the militants themselves.

One Irish hostage was confirmed safe: supervising electrician Stephen McFaul, whose mother said he would not be returning to Algeria.

"He phoned me at 9 o'clock to say Al Qaeda were holding him, kidnapped, and to contact the Irish government, for they wanted publicity. Nightmare, so it was. Never want to do it again. He'll not be back! He'll take a job here in Belfast like the rest of us," said his mother, Marie.

Dylan, McFaul's 13-year-old son, started crying as he talked to Ulster Television. "I feel over the moon, just really excited. I just can't wait for him to get home," he said.

In Washington, White House Press Secretary Jay Carney said the Obama administration was "concerned about reports of loss of life and are seeking clarity from the government of Algeria."

Jean-Christophe Gray, a spokesman for British Prime Minister David Cameron, said Britain was not informed in advance of the raid but described the situation as "very grave and serious." French President Francois Hollande called it a "dramatic" situation involving dozens of hostages.

Algerian forces who had ringed the Ain Amenas complex in a tense standoff had vowed not to negotiate with the kidnappers, who reportedly were seeking safe passage. Security experts said the end of the two-day standoff was in keeping with the North African country's tough approach to terrorism.

"I would not be surprised if the death toll was has high as the militants put it, it's a well-known fact that the Algerians never had problems causing a blood bath to respond to terrorist attacks," said Riccardo Fabiani, North Africa analyst for the Eurasia group, who expressed doubt over Algeria's claims that mediation was abandoned in the face of the kidnappers' intransigence. "I wonder whether really in 24 hours you can establish some kind of negotiations with terrorists, I don't think they really tried."

The kidnapping is one of the largest ever attempted by a militant group in North Africa. The militants phoned a Mauritanian news outlet to demand that France end its intervention in neighboring Mali to ensure the safety of the hostages in the isolated plant, located 800 miles south of the capital of Algiers.

Phone contacts with the militants were severed as government forces closed in, according to the Mauritanian agency, which often carries reports from Al Qaeda-linked extremist groups in North Africa.

A 58-year-old Norwegian engineer who made it to the safety of a nearby Algerian military camp told his wife how militants attacked a bus Wednesday before being fended off by a military escort.

"Bullets were flying over their heads as they hid on the floor of the bus," Vigdis Sletten told The Associated Press in a phone interview from her home in Bokn, on Norway's west coast.

Her husband and the other bus passengers climbed out of a window and were transported to a nearby military camp, she said.

"He is among the lucky ones, and he has confirmed he is not injured," she said, declining to give his name for security reasons.

It was then that the militants went after the living quarters of the plant instead of disappearing back into the desert.

A spokesman for the Masked Brigade told the Nouakchott Information Agency in Mauritania that the seven surviving hostages included three Belgians, two Americans, a Briton and a Japanese citizen.

The Norwegian energy company Statoil had said three Algerian employees who had been held hostage were safe but the fate of nine Norwegian workers was unclear. Japanese media reported at least 3 Japanese citizens among the hostages and Malaysia confirmed two.

Algerian Interior Minister Daho Ould Kabila said the roughly 20 well-armed gunmen operating under orders from Moktar Belmoktar, Al Qaeda's strongman in the Sahara, who is now based in Mali.