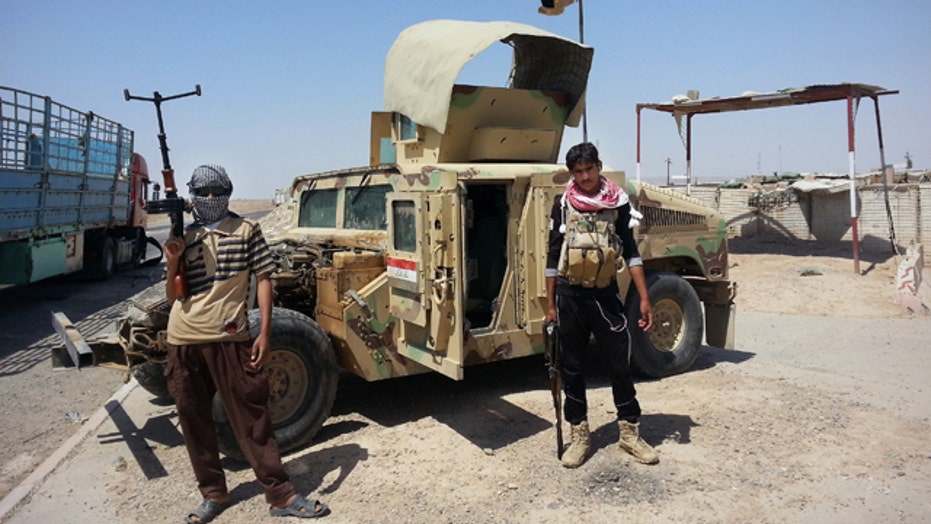 ISIS' thirst for oil could lead to global financial disaster

Islamic State's thirst for blood has the world on edge, but its equally insatiable yearning for oil could prove a "catastrophe" for the global economy if the terror organization isn't stopped, experts say.

The jihadist group, formerly known as ISIS, now controls seven oil fields and two small refineries in northern Iraq, bringing in as much as $2 million per day by selling up to 40,000 barrels via middlemen in illicit deals. The black market oil sells for roughly $25 to $60 per barrel, compared to the current market rate of $102, according to Luay al-Khatteeb, founder and executive director of the Iraq Energy Institute. And while this is a veritable drop in the global bucket of oil production, the crude spigot will continue translating into terror funds for Islamic State militants if unchecked, al-Khatteeb and other experts told FoxNews.com.

“Unless we choke this organization’s revenues, and the areas it’s able to access revenues, it’s going to keep growing,” said Denise Natali, a senior research fellow for the Institute for National Strategic Studies. “The Iraqi government has announced it now, but this has been going on for months.”

On Wednesday, Iraq’s Oil Ministry warned buyers of crude oil that unauthorized purchases made in the country could be used to fund terror activities by Islamic State. Buyers were urged to “exercise caution” and were reminded that any purchases without authorization from Iraqi officials could result in sanctions for financial terror activities.

Experts told FoxNews.com that ISIS-controlled oil fields and refineries in northern Iraq could potentially produce as much as 80,000 barrels daily, but is currently netting about half of that since most of the oil is confiscated directly from tanks and pipes. By comparison, southern Iraq produces more than 3 million barrels daily, while Texas produces about 2.5 million. A more direct comparison would be to production in Alabama and Mississippi, where approximately 28,000 and 66,000 barrels are produced daily, respectively. (Turkey, meanwhile, produces about 46,000 barrels daily, according to estimates.)

One of the stated goals of Islamic State militants, Natali said, is to take over the Arabian Peninsula, home to vast amounts of the world’s natural energy resources. If ultimately achieved, that development could drastically alter the region’s landscape.

“This can significantly imbalance, if continued, some of these regional energy sources,” Natali told FoxNews.com. “So the idea that ISIS is going to even touch of the fields in the south, which has not happened yet, is still enough of a threat to get involved. This could destabilize the entire region.”

Natali continued: “That’s what I think the focus has to be. Whose priority is this?”

A source close to the matter told London-based newspaper Asharq Al-Awsat that Islamic State is selling Iraqi oil to Kurdish traders in regions bordering Iraq, Iran and Syria before being shipped to Pakistan, where it’s being sold for less than half of market rates.

While production within those oil fields is globally insignificant, it does directly power the extremist group, offering the militants a degree of fiscal autonomy, according to al-Khatteeb.

“They’ve become very much self-sufficient,” he told FoxNews.com. “They control about 60 percent of Syria’s producing fields in its oil-rich eastern region. In Iraq, they control about seven oil-producing fields and two small refineries with a potential output of 80,000 barrels. And the black market is expanding into Turkey, which is becoming the main beneficiary of that market.”

Al-Khatteeb noted that the oil money is far from the extremist group’s sole income, citing its frequent illegal operations like extortion, kidnapping for ransom and by selling the large numbers of antiquities stolen from looted sites in northern Iraq.

“It’s insignificant at this point, but it provides them significant financial backing,” al-Khatteeb said of the oil production facilities now controlled by Islamic State. “Just on the Iraqi side, this is nearly three-quarters of a billion a year and this is, of course, not their only source of revenue.”

The extremist group numbers as many as 25,000 fighters, roughly half of whom are foreign-born, or outside of Iraq or Syria. The collective eyes of the terror organization now lie on oil-rich territories in Libya and throughout the Arabian Peninsula, particularly in Saudi Arabia.

“Now if that’s to happen, then we’re going to have a global catastrophe because that’s a region that produces 40 percent of global energy and holds 60 percent of conventional oil and gas taken hostage by terrorists,” al-Khatteeb told FoxNews.com. “Will the world need to wait until that moment happens? If that happens, it’ll create havoc across the hemisphere.”

A Turkish lawmaker reportedly claims that the militants have smuggled Syrian oil into Turkey worth approximately $800 million. Ali Ediboglu, a Republican People’s Party legislator for the border province of Hatay, told Taraf newspaper he fears the violent atrocities and indiscriminate killings that have taken place throughout Iraq and Syria could migrate to his country.

“You can never know what demands they could make to Turkey, a country whose regime they consider to be un-Islamic,” Ediboglu told the newspaper. “No one can guarantee they will not repeat the massacres they commit in Iraq today or carry out similar attacks in Turkey tomorrow.”