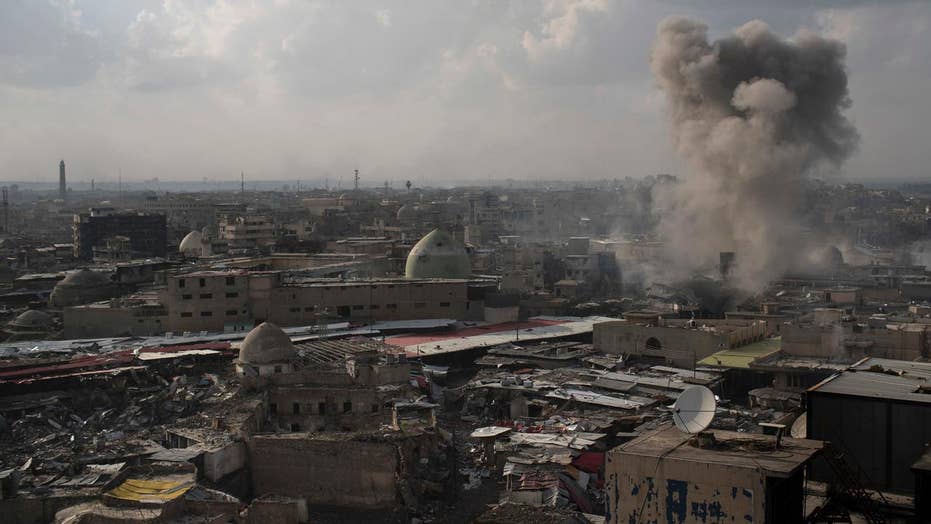 Inside the battle to defeat ISIS in Iraq

ISIS supporters are reportedly on a recruiting blitz in the wake of last week’s deadly terror attacks in London, despite suggestions from British police on Monday that attacker Khalid Masood may not be associated with any terror groups.

Hundreds of violent, pro-ISIS videos reportedly have hit the web since Wednesday's attack. According to the Times of London, Google, the owner of YouTube, has apparently failed to take many of them down. One YouTube video viewed by Fox News on Monday showed a series of brutal executions, and encourages followers to “live the cause.”

ISIS claimed responsibility for last week's attacks that killed four and injured dozens, calling Masood a "soldier" who responded to the group's calls to action. Top UK counter-terrorism officials suggested Monday that while there is no evidence yet that Masood had discussed his plans with others, investigators are focusing on messages that Masood had been sending via encrypted channels. Deputy assistant commissioner Neil Basu, senior national coordinator for UK counter-terrorism, added that "there is clearly an interest in jihad.

A YouTube spokesperson told Fox News that any time the company sees a video that violates its policies it is immediately taken down.

Just last week, it was disclosed that hundreds of companies are suspending contracts with YouTube/Google after advertisements for popular and even taxpayer-funded entities, like the BBC, began appearing alongside "extremist" videos. Among the more than 250 companies severing ties are advertising giants like Toyota, HSBC and Verizon. Reports suggest that the exodus could cost YouTube upwards of $750 million.

In a statement last week in response to the backlash, Google suggested that while it recognized there was an issue with ad placement, "we believe strongly in the freedom of speech and expression on the web -- even when that means we don’t agree with the views expressed."

In the past, YouTube has tried to counter the growth of extremist propaganda by emphasizing the need for alternate, positive narratives. Back in 2015, YouTube's Chief Legal Officer David Drummond reportedly told media executives and influencers that they should be focusing on "drowning out" the Islamic State's propaganda machine with "better messages, with reasonable messages."

President Barack Obama seemed to pursue a similar strategy in March 2016, approving the creation of a new "Global Engagement Center" within the U.S. government. The group was designed to "counter the messaging and diminish the influence of international terrorist organizations," like the Islamic State and others.

In an op-ed this month, Marc Ginsberg, former deputy senior adviser for Middle East policy under President Jimmy Carter, suggested that YouTube is a "prime culprit" in the spread of radical ideology. "Without YouTube’s convenience of access for on-line radicalization, the inspirational oxygen vital to ISIS or Al Qaeda terror recruitment would be severely depleted," Ginsberg wrote.

Mark D. Wallace, former U.S. ambassador to the U.N. under President George W Bush, also pointed out that YouTube's policies on propaganda seem at odds with its stance on things like pornography or copyrighted material.

"There is something particularly strange when a video-sharing company works so vigorously to discourage one form of behavior," Wallace said in a January op-ed, "but at the same time passively allows viewers to be led to increasingly violent propaganda and content."

Steven Stalinsky, the executive director of the Middle East Media Research Institute (MEMRI), argues that YouTube “isn’t as important as it used to be” for ISIS, and that the company actually does well when it comes to removing the group’s propaganda.