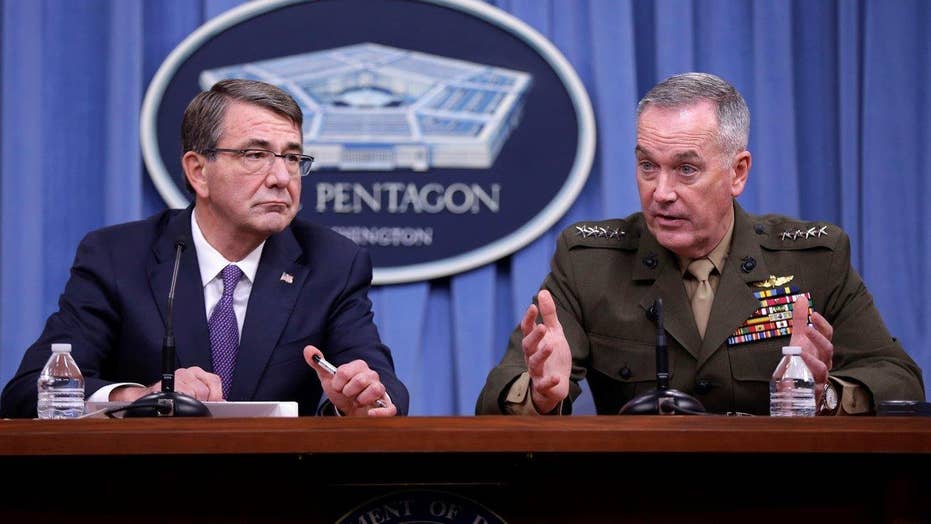 How US should proceed after death of ISIS finance minister

The Islamic State's war against the West intensified Friday, with terror groups fighting to hold their ground in Iraq and Syria while the U.S. announced it had killed several key ISIS leaders, including the network's paymaster.

At the same time, French and Belgian security forces conducted raids to take down the cell behind this week’s carnage in Brussels as well as the deadly November attacks in Paris.

In Iraq, ISIS claimed responsibility for a suicide bombing at an Iraqi football stadium that killed 29 and wounded 60.

A raid by U.S. Special Operations forces in Syria on Thursday killed Abd al-Rahman Mustafa al-Qaduli, who was ISIS' No. 2 man, a senior defense official confirmed to Fox News.

In the battle for Syria's historic town of Palmyra, Syrian government forces recaptured a Mamluk-era citadel on Friday, state media and monitoring groups reported. Syrian and Russian warplanes struck at least 56 targets inside ISIS-held areas of the city and pro-government militias supported the army's advance, according to the Syrian Observatory for Human Rights, a Britain-based monitoring group.

Palmyra has been controlled by the extremist group since May. The militants have destroyed some of its best known Roman-era archaeological relics. The Syrian government onslaught started on Wednesday.

In Iraq, the U.S.-led coalition has conducted airstrikes in and around Mosul for months as Iraqi forces remain 70 miles away ahead of a potential invasion, a U.S. military official tells Fox News.

The U.S. has described its actions as "shaping operations" to destroy ISIS targets ahead of an invasion force on the ground. But senior U.S. military officials have said the Iraqi military lacks the strength to invade Mosul right now.

The Iraqi football stadium bombing Friday came during a match in the city of Iskanderiyah, some 30 miles south of Baghdad, security officials said.

The Pentagon also announced Friday it was moving to boost the number of U.S. forces in Iraq to support that country's anti-ISIS ground fight. "Secretary [Ash Carter] and I both believe that there will be an increase in U.S. forces in Iraq in coming weeks, but that decision hasn't been made," Gen. Joseph Dunford, chairman of the Joint Chiefs of Staff, told Pentagon reporters during a briefing. He did not say how big that increase might be, adding that the Pentagon would discuss its proposal with President Obama soon.

Carter said the ISIS money man killed was a "well-known terrorist" who had a hand in plots outside of Iraq and Syria, and had been associated with the terror group dating back to its earliest iteration as Al Qaeda in Iraq.

Asked about the impact of these killings, Carter said, "Leaders can be replaced. However, these leaders have been around for a long time. They are senior, they are experienced."

ISIS propaganda videos repeatedly have theatened deadly attacks on targets across Europe, and on Tuesday, suicide blasts at the Zaventem airport outside Brussels and a metro station in the city killed 31 people and wounded 270 others.