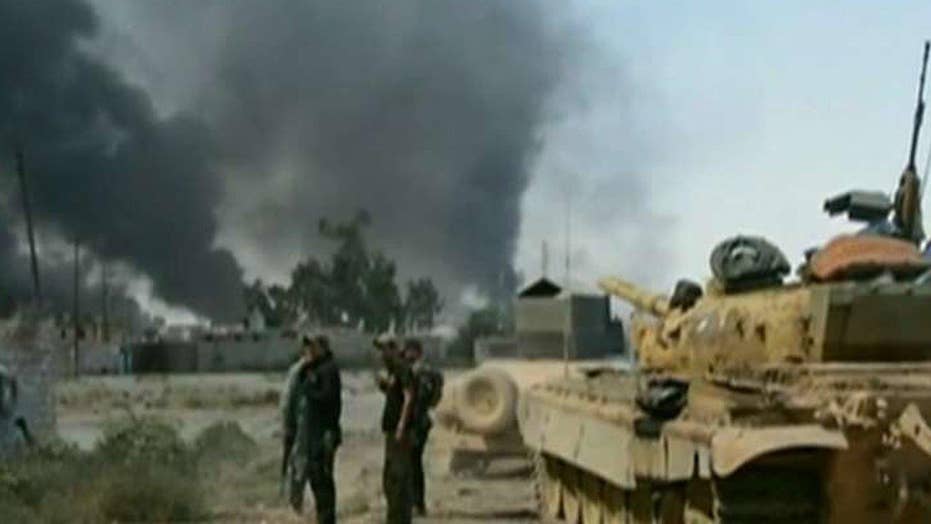 ISIS may have launched chemical weapon at US troops in Iraq

Rocket attack near military base, shell being tested for mustard agent

A Pentagon spokesman said Monday that Islamic State militants are “dead set” on using chemical weapons and will likely try to use them against Iraqi forces as they prepare its siege on Mosul.

ISIS fighters are believed to have attacked U.S. and Iraqi forces last week, a U.S. official told Fox News. Tests showed that initial reports of a "mustard agent" turning up on the rocket were incorrect, military officials said Tuesday. No one was hurt in the attack.

According to Reuters, the U.S.-led coalition conducted an air strike on an ISIS chemical weapons factory Friday near Qayyara, the second attack on such a facility this month.

Davis said the terror group has a basic understanding of making mustard gas. The group has used a chemical powder bound together with oil, with leaves behind a trace. A Pentagon official told Fox News last week a “tar-like black oily substance” was found on the shell, which landed within the base hundreds of yards from U.S. forces.

"It's not generally in a lethal concentration. It's more of an irritant than anything else, but again, not something we view as militarily significant," Davis said.

Davis said even though ISIS chemical weapons aren’t perfect, coalition forces still have to be prepared for a chemical attack. He added that the U.S. has provided more than 50,000 gas masks to Iraq – 40,000 going to Iraq security forces.