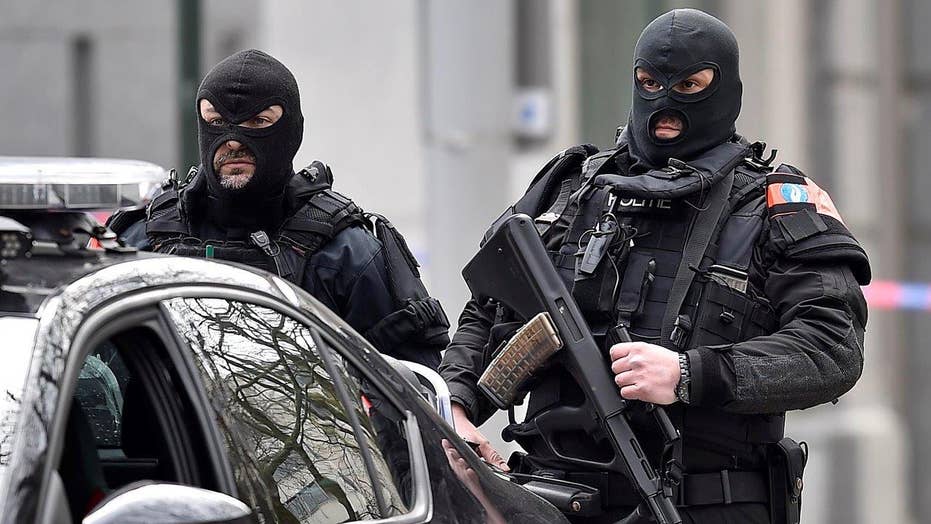 Brussels on lockdown after explosions at transportation hubs

DEVELOPING: ISIS has claimed credit for Tuesday morning’s rush-hour attacks in Brussels, which left at least 31 dead and more than 180 injured.

As many as 31 people were killed and more than 180 injured as coordinated terrorist bombings rocked the Brussels airport and subway system during rush hour Tuesday morning in the Belgian capital.

Two bombings at Zaventem Airport, where 11 people were reportedly killed, and another at the metro station in the Maelbeek section near the European Union headquarters, where the mayor's office said 20 were killed, were almost immediately confirmed as terrorism. The attack at the airport was reportedly accompanied by shouts in Arabic and gunfire, and an unexploded suicide belt was reportedly found in the aftermath.

"What we feared has happened, we were hit by blind attacks."

"What we feared has happened, we were hit by blind attacks," said Belgian Prime Minister Charles Michel.

"We are at war,” French Prime Minister Manuel Valls said Tuesday. “We have been subjected for the last few months in Europe to acts of war."

The attacks, which Belgian authorities said were suicide bombings, came four days after the main suspect in the November Paris attacks was arrested in Brussels, and even as Brussels was braced for new attacks.

A source told Fox News that a credible ISIS social media account posted the message, “Mosul revenge for the Kuffar capital Brussels,” but it was not definitive that the terror group was behind the attacks.

The first two explosions rocked the departure hall at the Brussels airport shortly after 8 a.m. local time. Early reports placed the number of dead at 13, with as many as 81 wounded, although the death toll was later revised downward to 11. Witnesses told The Associated Press that one occurred at an American Airlines counter and the other near a Starbucks cafe.

American Airlines said in a statement that none of its employees were among the dead or injured and later tweeted from its verified account that the blast did not occur at its check-in row.

“There were two explosions in the departure area, one probably caused by a suicide bomber," said Belgian federal prosecutor Frederic Van Leeuw of the attack on the airport.

A soldier stands near broken windows after explosions at Zaventem airport near Brussels, Belgium. (Reuters)

One of the airport bombs may have been in a suitcase, a U.S. official told The Associated Press, and local TV reported that it may have been loaded with nails.

“First there was one explosion. Everyone started to run and panic broke out. Then a second explosion was heard,” one witness told The Brussels Times about the airport explosion.

Zach Mouzoun, who arrived on a flight from Geneva about 10 minutes before the first blast, told BFM television that the second, louder explosion brought down ceilings and ruptured pipes, mixing water with blood from victims.

"It was atrocious. The ceilings collapsed," he said. "There was blood everywhere, injured people, bags everywhere."

"We were walking in the debris. It was a war scene," he said.

In this image taken from TV an injured person is evacuated as emergency services attend the scene after an explosion in a main metro station in Brussels. (Associated Press)

Marie-Odile Lognard, a traveler who was lining up in the departures hall for a flight to Abu Dhabi, told BFM television that people panicked after the first explosion about 65 feet from her and that a second explosion about 15 seconds later caused parts of the ceiling to collapse.

"I knew it was an explosion because I've been around explosions before," said Denise Brandt, an American woman interviewed by Sky television.

"I felt the explosion, the way it feels through your body. And we just looked at each other and I said 'let's go this way.' It was over there. There was just this instinct to get away from it. Then we saw people running, crying, toward us. So I knew we were going in the right direction and away from it. "

Amateur video shown on France's i-Tele television showed passengers -- including a child -- running with a backpack dashing out of the terminal in different directions as they tugged luggage. Belgian news channel RTBF reports a Kalashnikov rifle was found in the departure hall at the airport.

Marc Noel, 63, was about to board a Delta flight to Atlanta, to return to his home in Raleigh, N.C.

A Belgium native, Noel says he was in an airport shop buying automobile magazines when the first explosion occurred about 50 yards away.

"People were crying, shouting, children. It was a horrible experience," he told AP. He said his decision to buy the magazines might have saved his life. "I don't want to think about it, but I would probably have been in that place when the bomb went off."

Three Mormon missionaires, identified by the church as Richard Norby, 66; Joseph Empey, 20, and Mason Wells, 19, all of Utah, were the only Americans known to have been injured in the airport attack.

Moments later at the Metro station, another explosion was reported on a train that was stopped at the Maelbeek subway station, not far from the headquarters of the European Union. Ian McCafferty told The Irish Times he was just getting off the metro at the stop before Maelbeek around 8:20 a.m. when he heard a “loud muffled thud” but, because of construction at the metro, he “didn’t really think much of it.

“There was a large military presence and mass confusion,” he said. “People started to run. Some people were crying. The two stations are only a stone’s throw apart. We were the last train through the station before the blast.”

Rescue workers set up a makeshift treatment center in a local pub near the train station. Dazed and shocked morning travelers streamed from the metro entrances as police tried to set up a security cordon.

Brussels Mayor Yvan Majeur put the number of dead at the train station at 20, with more than 100 more injured.

Alexandre Brans, 32, who was wiping blood from his face, said: "The metro was leaving Maelbeek station when there was a really loud explosion. It was panic everywhere. There were a lot of people in the metro."

First responders ran through the street outside with two people on stretchers, their clothes badly torn.

The bombings in the European Union capital are certain to add new fire to the raging debate over refugees from Muslim nations where terrorist groups are active. Europe has taken in more than a million refugees, and terror groups including ISIS have said they are infiltrating the wave of migrants.

After his arrest on Friday, Salah Abdeslam, who is suspected of taking part in the Nov. 13 Paris attack that killed 130 people, told authorities he had created a new network and was planning new attacks.

After Abdeslam's arrest and before Tuesday's attacks, authorities were frantically hunting a suspect identified as 24-year-old Najim Laachraoui, who allegedly traveled to Hungary with Abdeslam before the Paris attack on Nov. 13. It was unclear whether Laachraoui played any role in Tuesday's bombings, but prosecutors say Laachraoui played a key role in recruiting attackers for ISIS.

U.S. authorities were monitoring the situation, poised to assist in the investigation. A U.S. counter-terrorism source told Fox News the priority for investigators is identifying the suicide bomber or bombers through DNA because they cannot operate in isolation, and identifying them can lead to the broader network.

Speaking Havana, President Obama mentioned the attacks before giving prepared comments on the thawing relationship between the U.S. and Cuba. Obama called the attacks “outrageous,” and pledged that the thoughts and prayers of Americans are with the Belgian people.

“This is yet another reminder that the world must unite, we must be together, regardless of nationality or race or faith, in fighting the scourge of terrorism,” said Obama, who had also spoken to Michel by phone.

Belgium's interior minister announced that the terror threat was being raised to its maximum level. All flights were canceled and arriving planes and trains were diverted.

Authorities told people in Brussels to stay where they were, bringing the city to a standstill. Airport security was also tightened in Paris, London and other European cities. Flights due to land at Zaventem, which handles 21 million passengers a year, were sent to Antwerp, Liege, and Brussels Charleroi airports.

French President Francois Hollande said "terrorists struck Brussels but it was Europe that was targeted -- and all the world that is concerned," adding that "this war will be long."

Paris announced it would light the Eiffel Tower in the colors of the Belgian flag, and security around France's nuclear plants was reportedly increased, though no specific threat was cited.