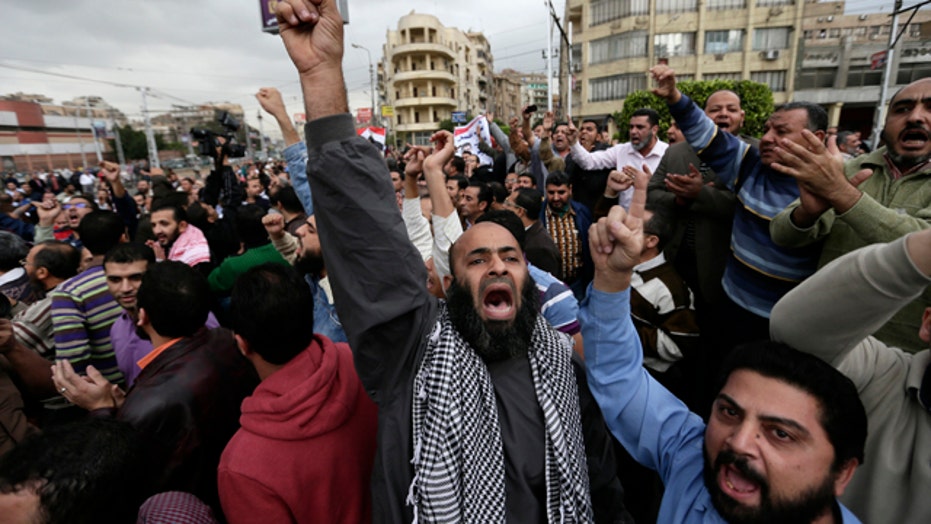 Is the Muslim Brotherhood a threat to US national security?

The Muslim Brotherhood, a hardline Egyptian Islamic group, is in a constant political battle with the military-backed government over control of Egypt.

It’s unclear what the future holds for the group, and the U.S.  is concerned about the organization’s ties to radical Islam.

Hamid is the senior fellow and chair of the study of Islamic Radicalism at the Potomac Institute for Policy Studies. He was also a former member of a terrorist Islamic organization Jemaah Islamiya with Ayman Al-Zawaherri, who became later second in command of Al Qaeda.

Hamid says the U.S. should not be fooled into thinking the organization is a moderate group.

“The Muslim Brotherhood works in four stages … preaching … share in power with ours … consolidate power … use violence to enforce Sharia [religious law of Islam],” said Hamid.  “As long as they [Muslim Brotherhood] have not reached stage four many people, especially in the West, couldn’t recognize their threat … because [before then] they see them as a peaceful group.”

Hamid warned, “If you waited more for them [to spread their operations] you will start to see the reality.”

Hamid believes the Muslim Brotherhood is secretly supporting jihadist movements. “They don’t do the dirty work themselves … they can release the jihadists … they do not get engaged themselves in the terrorist acts.”

He cited Islamists in the African country of Mali, who were gaining strength in 2012, as an example of Morsi taking the side of the radicals.

“Morsi objected to the French intervention in Mali against the Jihadists … you can see that they give us a lot of lip service of how peaceful they are and they deceived many of us,” said Hamid.

Hamid, author of “Inside Jihad: Understanding and Confronting Radical Islam,” believes the Muslim Brotherhood was too confident when Morsi was elected. They thought their party would remain in power permanently going forward.

“This over confidence lead many of their leaders started to relax and start to talk to some of the people like Ayman Al-Zawaherri and others,” said Hamid. “When they [Muslim Brotherhood] got to power, the first election after Morsi came to power it was a referendum of the Constitution … you cannot imagine the level of deception, the abuse that happened  to the ordinary people in order to change the results of the referendum for their benefit.”

Hamid says that Egyptian General Abdel Fattah el-Sisi and the country’s military were right in removing Morsi from power.  “If he didn’t do so, Egypt would have … become another Taliban [haven] in this part of the world.”