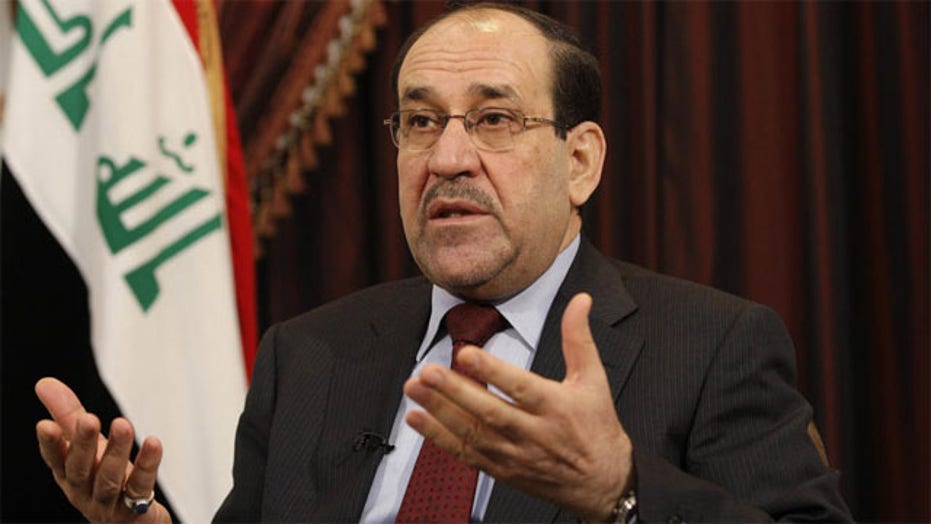 How a change in political leadership will help Iraq

Iraq's Shiite prime minister Nouri al-Maliki, embattled by the militant offensive sweeping his country's north, faces growing calls for him to be forced out of office as Al-Qaeda inspired insurgents press closer to Baghdad.

Nouri al-Maliki, who rose from relative obscurity to the country's top political office in 2006, has seen his credibility challenged by the Sunni militants of the Al Qaeda-inspired Islamic State of Iraq and the Levant (ISIS). The insurgents launched a stunning offensive last week that swallowed up a large chunk of northern Iraq, together with the nation's second-largest city, Mosul.

With the country now in turmoil, al-Maliki's rivals have mounted a campaign to force him out of office, with some angling for support from Western backers and regional heavyweights. On Thursday, their effort received a massive boost from President Barack Obama.

Obama stopped short of calling for Nouri al-Maliki to resign, saying "it's not our job to choose Iraq's leaders." But, his carefully worded comments did all but that.

"Only leaders that can govern with an inclusive agenda are going to be able to truly bring the Iraqi people together and help them through this crisis," Obama declared at the White House.

"We've said publicly, that whether (al-Maliki) is prime minister or any other leader aspires to lead the country, that there has to be an agenda in which Sunni, Shiite and Kurd all feel that they have the opportunity to advance their interest through the political process," the president said.

Though Obama did not directly call for al-Maliki to resign, the administration is reportedly weighing whether to press the Shiite prime minister in Baghdad to step down in a last-ditch effort to prevent disgruntled Sunnis from igniting a civil war.

More so than airstrikes or other American military action, top U.S. officials believe that giving more credence to Sunni concerns about Prime Minister Nouri al-Maliki can stave off another deadly round of sectarian fighting of the kind that engulfed Iraq less than a decade ago.

Vice President Joe Biden spoke with the Iraqi leader Wednesday and emphasized the need for him to govern in an inclusive manner. Biden also spoke to Iraq's Sunni parliamentary speaker and the president of Iraq's self-ruled northern Kurdish region.

Al-Maliki, who has long faced criticism for not making his government more inclusive, went on a diplomatic offensive this week, reaching out in a televised address to try to regain support from the nation's disaffected Sunnis and Kurds. His conciliatory words, coupled with a vow to teach the militants a "lesson," came as almost all Iraq's main communities have been drawn into a spasm of violence not seen since the dark days of sectarian killings nearly a decade ago.

An "inclusive agenda" has not been high on the priorities of al-Maliki, however. Many of al-Maliki's former Kurdish and Shiite allies have been clamoring to deny the prime minister a third term in office, charging that he has excluded them from a narrow decision-making circle of close confidants.

Al-Maliki's efforts last year to crush protests by Sunnis complaining of discrimination under his Shiite-led government sparked a new wave of violence by militants, who took over the city of Fallujah in the western, Sunni-dominated province of Anbar and parts of the provincial capital Ramadi. Iraqi army and police forces battling them for months have been unable to take most areas back.

At the same time, many Iraqis complain of government corruption, the failure to rebuild the economy and too close ties with mostly Shiite Iran, a non-Arab nation that Sunni Arab states, including powerhouse Saudi Arabia, see as a threat to regional stability.

An Iraqi Shiite lawmaker, Hakim al-Zamili, said he was aware of a meeting in recent days between Iraqi political leaders and U.S. officials over the issue of al-Maliki's future, though he did not know who attended the meeting.

Mohammed al-Khaldi, a top aide to outgoing Sunni speaker of parliament, Osama al-Nujaifi, said: "We have asked the Americans, Britain, Turkey, Saudi Arabia and Iran to work toward denying al-Maliki a new term. The Shiite bloc must find a replacement for him."

"I think that most of Obama's speech, but not all of it, it was shallow and didn't address the heart of the matter," Sheik Ali Hatem al-Suleiman told The Associated Press in the northern Kurdish city of Irbil. "The real problem in Iraq is al-Maliki himself."

"U.S. policy cannot rely on a paralyzed man who has lost control of Iraq, when he is the one who took Iraq to this point."

Al-Maliki has been adopting conciliatory language in recent days toward Sunnis and Kurds. He said the militant threat affects all Iraqis, regardless of their ethnic or religious affiliation, and called on Iraqis to drop all "Sunnis and Shiites" talk. The ongoing crisis, al-Maliki said, had made Iraqis rediscover "national unity."

Al-Maliki's efforts come as militants and soldiers fight for control of the Beiji refinery, the country's largest, some 155 miles north of Baghdad. The loss of the refinery would be a devastating symbol of the Baghdad government's powerlessness in the face of a determined insurgency hostile to the West. By late Thursday, the two sides held different parts of the refinery, which extends over several square miles of desert.

The facility's production accounts for just over a quarter of the country's entire refining capacity. It goes strictly toward domestic consumption for gasoline as well as fuel for cooking and power stations.