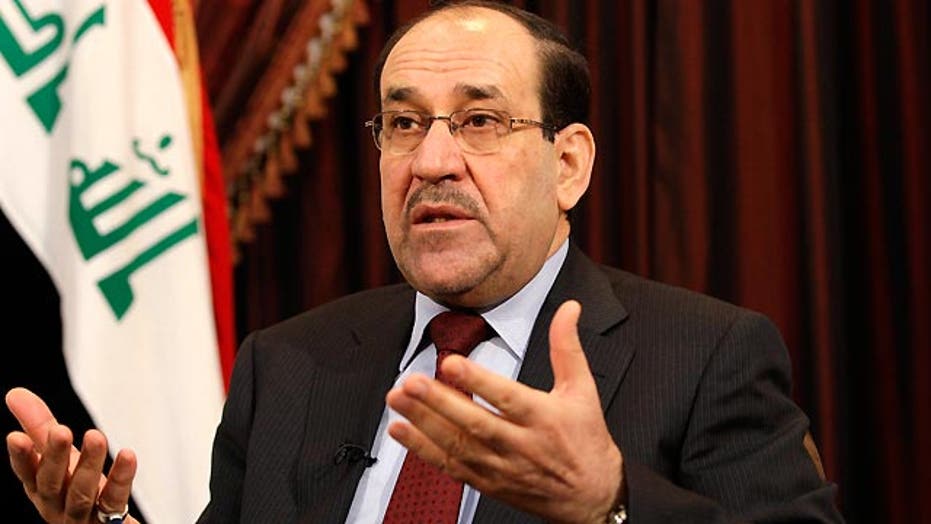 There is relief in Iraq and among Western leaders Friday as a new prime minister-designate vowed to unite the Iraqi people, and fight corruption and Sunni militants who have overrun large parts of the country.

In a statement released by his media office Friday, al-Abadi said his Cabinet will be based on "efficiency and integrity, to salvage the country from security, political and economic problems."

Al-Maliki had insisted for weeks that he should be allowed to serve a third four-year term, as even his fellow Shiites pushed for him to go. "I say to Iraq, I will not be the reason for the shedding of one drop of blood," the Wall Street Journal reported the prime minister said.

Extremists from the Islamic State group have conquered about a quarter of the country in recent months, as al-Maliki helped mobilize dangerously sectarian Shiite militias to combat the Sunni rebels. Meanwhile, the country's ethnic Kurds intensified their calls for independence, the Journal reported.

Al-Maliki’s departure ends eight years of tumultuous rule and opens a new political chapter that U.S. officials hope will move Iraq toward a more united front against Sunni militants. If hopes for a peaceful and democratic political transition -- the first in Iraq's modern history— are realized, that may clear the way for more Western aid to Iraq.

Iraq’s top Shiite cleric was one of al-Maliki’s opponents who celebrated the end of his rule Friday, and urged Abadi to carry out dramatic reforms so the new government can take on the insurgency.

Cleric Ayatollah Ali al-Sistani called upon the next government to address "shortcomings" in security and to crack down on corruption in the political establishment. He said there is a "dire need" for new leadership that can combat terrorism and heal sectarian divisions.

"This is a rare, positive chance for Iraq to pursue new horizons that will lead to solving all of its problems -- especially political and security," the reclusive leader said in a Friday sermon delivered by his spokesman Ahmed al-Safi in the holy city of Karbala.

"The enormous spread of corruption in state institutions hampers any real progress in the sectors of security, services and economic development."

Al-Sistani, who rarely appears in public and almost always delivers messages through spokesmen, had been issuing veiled calls for al-Maliki to step aside for weeks, marking a rare intervention in politics by the normally quietist cleric.

Al-Abadi, a veteran Shiite lawmaker, now faces the immense challenge of trying to unite Iraqi politicians as he cobbles together a Cabinet in just over three weeks.

Iraq's major factions deeply distrust each other. Sunni politicians are pressing for greater political influence, saying their disenfranchisement under al-Maliki's Shiite-dominated government fueled support among the Sunni minority for the insurgency, led by members of the Islamic State. At the same time, the military needs significant bolstering after falling apart in the face of the militants' advance and proving incapable of taking back lost territory.

Many Iraqis were rejoicing Friday over news of the regime change. During Friday prayers in Baghdad's Shiite Sadr City district, a man distributed sweets to Shiite worshippers, proclaiming, "Saddam has been brought down."

The comparison of al-Maliki to the late dictator Saddam Hussein showed the depth of opposition to the outgoing prime minister even among some of his fellow Shiites. Shiite factions turned against al-Maliki largely because they saw him as domineering and monopolizing power and allowing widespread corruption in favor of his loyalists. Critics say he staffed the military's officer corps with incompetent loyalists, playing a major role in the army's collapse in the face of the Islamic State militants the past two months.

Sunni factions also accused him of widespread corruption. They said his government sidelined their community, angered by his crackdown on Sunni protests and arrests of Sunni politicians.

When insurgents from the Islamic State surged southward from Mosul to within striking distance of Baghdad in June, it sent al-Maliki's military fleeing, and prompted even his strongest allies to distance themselves. As the Islamic State advanced further into the northern region of Iraq last week, politicians pressured al-Maliki to relinquish his power.

The U.S., the U.N., and perhaps his most important ally Iran were in agreement that he should go.

The White House commended al-Maliki's move Thursday and expressed hope that the transfer of power "can set Iraq on a new path and unite its people" against the threat from Islamic militants, national security adviser Susan Rice said in a statement.

U.S. Secretary of State John Kerry said the move "sets the stage for a historic and peaceful transition of power in Iraq."

The U.N. Security Council urged al-Abadi to work swiftly to form "an inclusive government that represents all segments of the Iraqi population and that contributes to finding a viable and sustainable solution to the country's current challenges."

The Islamic State group's lightning advance has driven hundreds of thousands of people from their homes, and last week prompted the U.S. to launch aid operations and airstrikes as the militants threatened religious minorities and the largely autonomous Kurdish region.

A total of 1.5 million people have been displaced by the fighting.