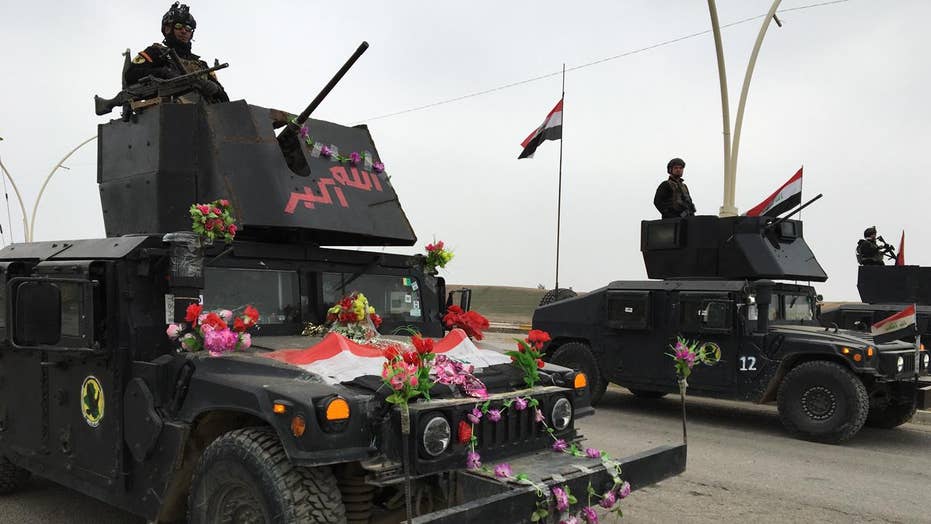 MOSUL, Iraq – After Iraqi Prime Minister Haider Al-Abadi announced that eastern Mosul was cleared of ISIS fighters, the Iraqi Special Operations Forces staged a victory parade in front of Mosul University. They cheered in the precise place where ISIS had celebrated its conquest of Iraq's second largest city in 2014.

Battle-hardened commandos of the legendary Golden Division drove armored Humvees festooned with the Iraqi national flag and plastic flowers. Riding atop the gun-laden vehicles, they displayed captured ISIS black flags upside down while blasting horns and playing a recording of the division's theme song.

According to a special forces officer, the demonstration was mounted to reassure the tens of thousands of civilians who had remained inside their houses in eastern Mosul during the months-long, door-by-door battle that it is now safe to walk the streets. Hundreds of men and a smattering of women and children cheered as a construction crane raised a huge Iraqi flag on top of a hill within sight of nearby ISIS fighters across the Tigris River.

The Iraqi-led forces encircling western Mosul are preparing to launch a final offensive against ISIS fighters barricaded in the luxury houses they seized for use as headquarters, prisons, kitchens, barracks and slaughterhouses. Many of the opulent homes are located on defensible high ground, affording them clear sight lines for ISIS snipers to target the Iraqi forward units, especially the Golden Division spearhead. The houses are laced with IEDs, explosive booby traps hidden in toys, cars, flower pots and corpses.

When the Iraqi commandos cross the Tigris, suicide bombers will propel bomb-loaded cars at them from side streets; small, spying drones will drop cleverly rigged hand grenades from a few hundred feet up. In advance of the final offensive, coalition air strikes are bombing suspected ISIS houses and weapons depots, trying to kill jihadists and destroy their battlements.

More than 500,000 civilians are trapped in western Mosul, which is held hostage by ISIS. Golden Division soldiers are known for risking their own lives to pull civilians out of harm's way, but some ordinary people will lose their homes, their livelihoods, their limbs and even their lives in the chaos of battle.

The hope is that Iraqis will retake western Mosul and, as in the east, people will emerge to start up life anew, selling meat, vegetables, gasoline, hot chai and fresh water while sweeping away the rubble and washing away the blood.

Al Abadi told the Associated Press that he does not know how long it will take to free the western side of the city.