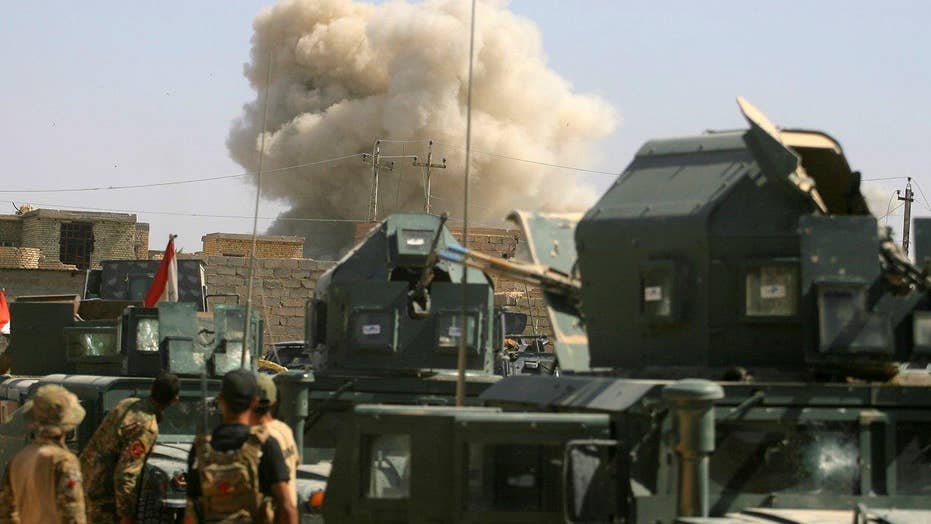 BAGHDAD – Iraqi government forces cleared mines and explosives left behind by the Islamic State group in recently recaptured areas of Fallujah, as fighting continued in other parts of the city Saturday, an Iraqi military official said.

Military operations were ongoing in Fallujah, with the air force hitting targets in the city including IS snipers positioned near the main hospital, Brig. Haider al-Obeidi told The Associated Press.

Troops were advancing toward the hospital cautiously, concerned that militants stationed there may use patients as human shields, he said.

Al-Obeidi's comments came a day after Iraqi special forces swept into Fallujah, recapturing most of the city as IS's two-year-old grip crumbled after weeks of fighting. The Fallujah offensive began in late May, and IS's defenses in much of the city collapsed abruptly.

On Friday, al-Obeidi said that Iraqi troops controlled 80 percent of the city, with IS fighters concentrated in four districts on its northern edge.

It was a major step toward removing the Islamic State group from its last major foothold in Iraq's western Anbar province, the heartland of the country's Sunni minority. Should Fallujah be declared fully recaptured, this would leave the city of Mosul — Iraq's second largest — as IS's only remaining urban stronghold in the country.

The militants overran Fallujah in early 2014, the first major town to fall into IS hands before it overran most of Anbar and much of northern Iraq.

Iraqi troops have been advancing under the cover of airstrikes by the U.S.-led coalition and Iraq's air force. The operation inside the city of Fallujah was being conducted by the Iraqi army, regional and federal police forces as well as special anti-terrorism units. Shiite militias known as the Popular Mobilization Force were outside Fallujah and have not taken part in the recent battles.

Aid groups estimated that 50,000 civilians were trapped inside Fallujah when the assault began several weeks ago, and they say that 30,000 to 42,000 of those have fled since then. The majority have been staying in camps in areas around the city.

During Friday's push by the government, thousands of residents fled the city, some swimming across the Euphrates river to reach safety.

On Friday evening, Iraqi Prime Minister Haider al-Abadi spoke on national TV from the joint command center, congratulating the troops on their victories. "We promised to liberate Fallujah, and it has returned to the embrace of the nation," he said.

The conflict in Iraq has forced more than 3.3 million people to flee their homes. Iraq is also hosting up to 300,000 refugees who have fled the civil war in neighboring Syria. Most are living in camps or informal settlements.

In the central province of Salahuddin, where IS suffered a major defeat last year when it lost former Iraqi leader Saddam Hussein's hometown of Tikrit, government forces pushed north of the province toward IS territory, said Brig. Gen. Yahya Rasoul.

Rasoul said the fighting is concentrating north of the oil refinery of Beiji, Iraq's largest. The refinery has not been working since IS took large parts of northern and central Iraq in 2014, declaring a caliphate.

Despite being under attack in Iraq and Syria, the extremists retaliated with a suicide truck bomb attack near the office of a Kurdish group in northern Iraq.

The blast killed at least one person, according to Shallal Abdoul, the mayor of the northern town of Tuz Khormato.