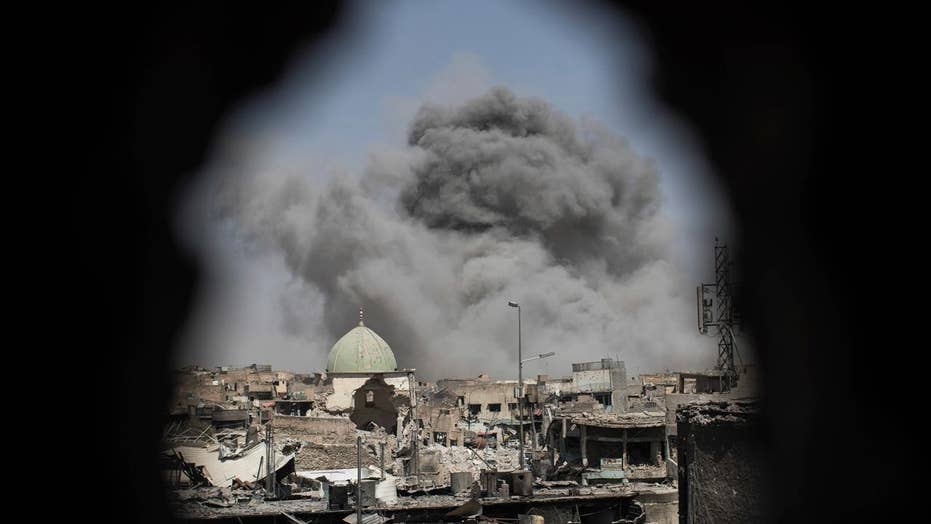 Iraq’s prime minister on Thursday declared an end to the Islamic State’s so-called caliphate in the Middle East as forces pushed deeper into the Iraqi city of Mosul and the Syrian city of Raqqa.

Iraqi forces began a bush deeper into Mosul’s Old City, where ISIS militants were making their last stand and by afternoon they had reached an al-Nuri Mosque – the site where ISIS leader Abu Bakr al-Baghdadi made his lone public appearance in July 2014, declaring a “caliphate” in Syria and Iraq.

“We are seeing the end of the fake Daesh state. The liberation of Mosul proves that," Iraqi Prime Minister Haider al-Abadi said on Twitter. "We will not relent. Our brave forces will bring victory."

Iraqi and coalition officials said Islamic State fighters destroyed the mosque and denied the militants’ assertion that U.S.-led coalition airstrikes had destroyed it.

U.S.-led coalition Ryan Dillon told reporters at the Pentagon that fighting in Mosul remains difficult with “tight alley ways, booby traps, civilians and ISIS fighters around every corner.” He still insisted, however, that victory would come “in days rather than weeks.”

Even after Mosul is retaken, however, Islamic State still controls significant pockets of territory in Iraq that Iraqi forces say will require many more months of fighting to liberate. Some 300 ISIS fighters remain holed up inside the last Mosul districts the militants hold, along with an estimated 50,000 civilians, according to the United Nations.

The fight for the Old City has seen some of the most difficult urban combat yet for Iraqi forces in the campaign against ISIS. Eight months into the Mosul offensive, ISIS now holds less than a square mile of the city, but the advances have come at considerable cost. Damaged and destroyed houses dot the Old City neighborhoods retaken by Iraqi forces and the stench of rotting bodies rises from beneath collapsed buildings.

June 28, 2017: An Iraqi special forces soldier moves towards the frontline near the al-Nuri mosque during fights against Islamic State militants in the Old City of Mosul, Iraq. (AP)

"There are hundreds of bodies under the rubble," said Iraqi special forces Maj. Dhia Thamir. "But they are all Daesh."

Meanwhile, across the border in Raqqa, coalition forces predicted a long, bloody battle ahead for the Kurdish-led Syrian Democratic Forces, whose fighters succeeded in completely encircling the militants' de-facto capital Thursday. U.S.-led coalition officials estimated that as many as 2,500 ISIS fighters remained in the city.