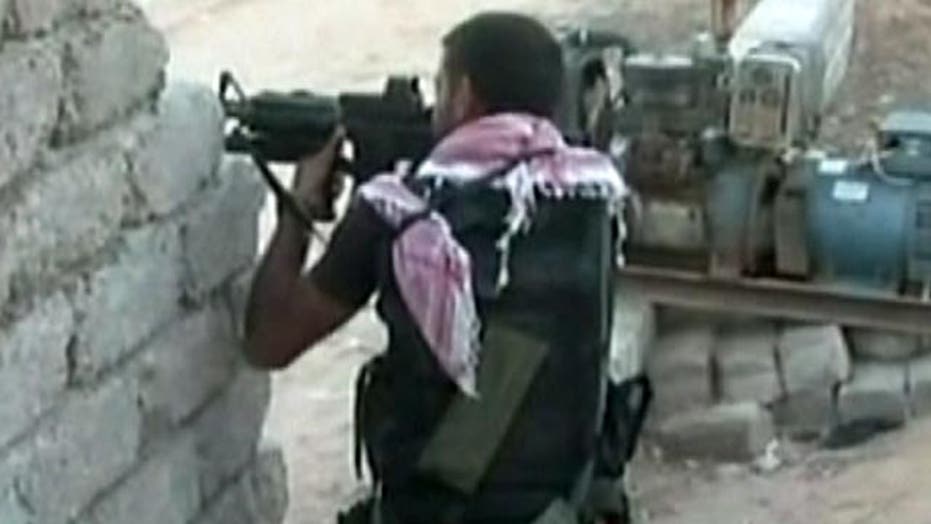 Retaking Beiji, 250 kilometers (155 miles) north of Baghdad, could allow Iraqi forces a base to attack neighboring Tikrit, taken by the extremists after their lightning advance this summer. It also represents a morale boost for Iraq's beleaguered security forces, which saw many of its troops flee the militant offensive.

State television quoted the top army commander in Beiji, Gen. Abdul-Wahab al-Saadi, as saying troops recaptured the city's local government and police headquarters at the center of the town. It aired what appeared to be archival footage of the town showing Iraqi army troops firing their weapons from behind sand barriers.

Al-Saadi later spoke to state television by telephone but the line appeared to be cut off after he said his forces were meeting stiff resistance.

A senior military official reached by telephone in Beiji confirmed the recapture of the city center, but added that intense clashes continued elsewhere in the town. He told The Associated Press that 75 percent of Beiji was now in the hands of government troops. He spoke on condition of anonymity because he was not authorized to speak to journalists.

Government officials in Baghdad offered no immediate comment on the reports. Al-Saadi said Saturday that his forces had recaptured most of the city and that it would soon be entirely rid of Islamic State group fighters.

There was no word on the fate of the refinery, which lies on the outskirts of the town and has been besieged by Islamic State fighters since June. The small army unit inside the refinery, resupplied and reinforced by air for months, successfully resisted wave after wave of extremist assaults.

Iraq's army and security forces partially have regrouped after melting away in the face of the summer's Islamic State offensive. In recent weeks, they recaptured a string of small towns and villages, but taking Beiji would be strategically significant in what is shaping up to be a drawn-out campaign against the extremists.

Recapturing Beiji also would be a major boost for Iraq's Shiite-led government and could pave the way for a fresh offensive to drive Islamic State militants from the nearby city of Tikrit, Saddam Hussein's hometown and the capital of Salahuddin province.

The campaign to retake Beiji suffered a serious setback Friday when a suicide truck bomber struck the convoy of a top Iraqi police officer, killing eight people, including the ranking official, Lt. Gen. Faisal Malik al-Zamel. Al-Zamel and al-Saadi jointly led the Beiji campaign, carried out by a contingent of troops and security forces drawn from a nearby military base and airlifted from government-controlled areas elsewhere.

Airstrikes by a U.S.-led coalition have aided Iraqi forces, militias and Kurdish peshmerga fighters battling Islamic State militants. Hundreds of U.S. advisers and trainers also have been working with the Iraqis.

Meanwhile in Syria, U.N. envoy Staffan de Mistura reiterated his call for a truce in the northern city of Aleppo where rebels still hold large areas, although they are under increasing attack from advancing government forces.