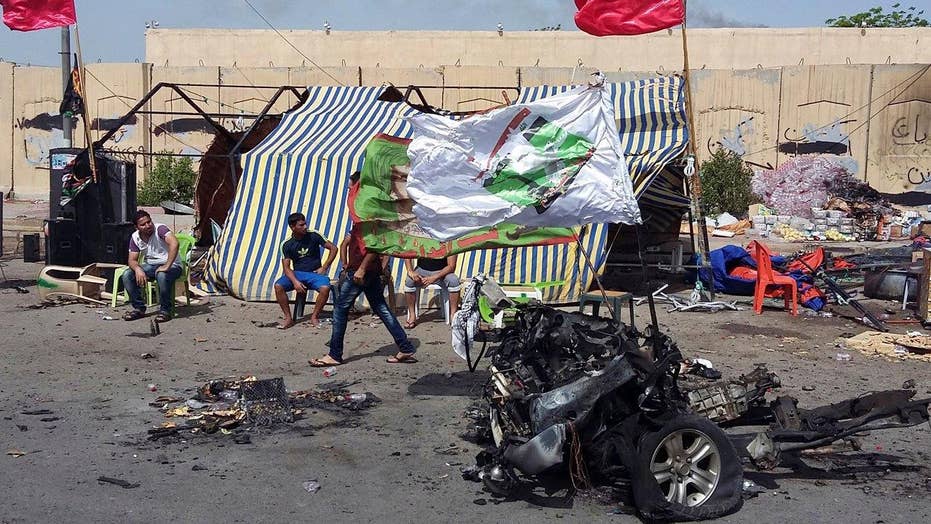 BAGHDAD – Anti-government protesters disbanded at least temporarily Sunday from the heavily fortified Green Zone they had stormed a day earlier after the Islamic State group (ISIS) carried out its second major attack in Iraq in as many days — a pair of car bombs that killed more than 30 people.

The country's political crisis intensified Saturday when hundreds of supporters of Shiite cleric Muqtada al-Sadr tore down walls and poured into the zone that is home to the seat of the Iraqi government and most foreign embassies. Loudspeaker announcements on Sunday evening urged protesters to leave peacefully. When the call came, hundreds calmly packed up and left, carrying flags and overnight bags away with them.

Later in the day, families walked through the compound's smoothly paved streets and snapped pictures beside its well-watered gardens, and young men bathed in a fountain. Such scenes are entirely divorced from the rest of the city's crumbling infrastructure and neglected public spaces.

The Green Zone, surrounded by thick blast walls topped with razor wire, is off-limits to most Iraqis because of security procedures that require multiple checks and specific documentation to enter. It has long been the focus of al-Sadr's criticism that the government is detached from the people.

Supporters of al-Sadr have been holding demonstrations and sit-ins for months to demand an overhaul of the political system put in place by the U.S. following the overthrow of Saddam Hussein in 2003. Last summer, demonstrations demanding better government services mobilized millions across Iraq and pressured Prime Minister Haider al-Abadi to submit his first package of reform proposals. However, months of stalled progress followed, and in recent months al-Sadr's well-organized supporters took over the protest movement.

Despite the subdued end to the latest protest, Iraqi officials fear the precedent set by the Green Zone breach will continue to undermine the country's security.

Earlier on Sunday, car bombs in the southern city of Samawah killed 31 people and wounded at least 52. A police officer said two parked cars filled with explosives were detonated within minutes of each other around midday, the first near government offices and the second at an open-air bus station less than a mile away. On Saturday, an ISIS-claimed bombing in a market filled with Shiite civilians in Baghdad killed at least 21 people and wounded at least 42 others.

The attacks were just the latest in a series of ISIS-claimed bombings in Iraq. Over the past month, the United Nations said at least 741 Iraqis were killed in April due to ongoing violence. On March 25, an ISIS-claimed suicide bombing attack on a stadium filled with children killed 29 and wounded 60.

"The political crisis is having a very negative influence on our war against Daesh," said Iraqi lawmaker Younadim Kanna, using an Arabic acronym for ISIS. "I can tell you Daesh is very happy that there are these demonstrations in Baghdad," he said explaining that the instability in the Iraqi capital was pulling security forces away from the front-line fight against ISIS and from the perimeter security of the Iraqi capital.

Baghdad Operations Command confirmed that additional security forces were deployed Saturday to the Green Zone after protesters breached its walls. In March, political instability in Baghdad pulled Iraqi units away from the front and brought operations against ISIS in Anbar to a near halt.

While ISIS has suffered a number of territorial defeats in the past year, the group still controls significant pockets of territory in Iraq's north and west, including the country's second largest city of Mosul, estimated to still be home to more than 1 million civilians.

Al-Sadr's office in Baghdad denied that the demonstration was jeopardizing the fight against ISIS, but conceded that the decision to disband Sunday was made partly for security reasons.

Organizers decided to end the protest now because of an annual Shiite pilgrimage to the shrine of an eighth century imam in Baghdad that is expected to attract thousands from across the country, said Sadiq al-Hashemi, a representative of al-Sadr's office in Baghdad who was present at the protests.

The protests will resume after the pilgrimage ends this week, al-Hashemi said, adding that the al-Sadr movement would also give Iraqi lawmakers one more chance to vote in new reforms.

"We have achieved something here. We got our message out from the Iraqi street," Al-Hashemi said.

But lawmakers and Iraqi security officials say Sadr's show of force is undermining the country's leadership at a critical time and sets a dangerous precedent.

"They could just do it again," said lawmaker Hanan al-Fatlawi, referring to the Green Zone breach. "This is not a real solution. They showed no respect for the rule of law."

As they passed the parliament building they overran a day earlier, protesters said Iraq's lawmakers have already had their chance to achieve change in the halls of government.

"They don't really want reform," said Hussein Ahmed Tariq, 19, who camped with protesters overnight. "We gave them so much time, and each time they said the next day and the next day. We reached a point where we realized they don't want to vote at all."