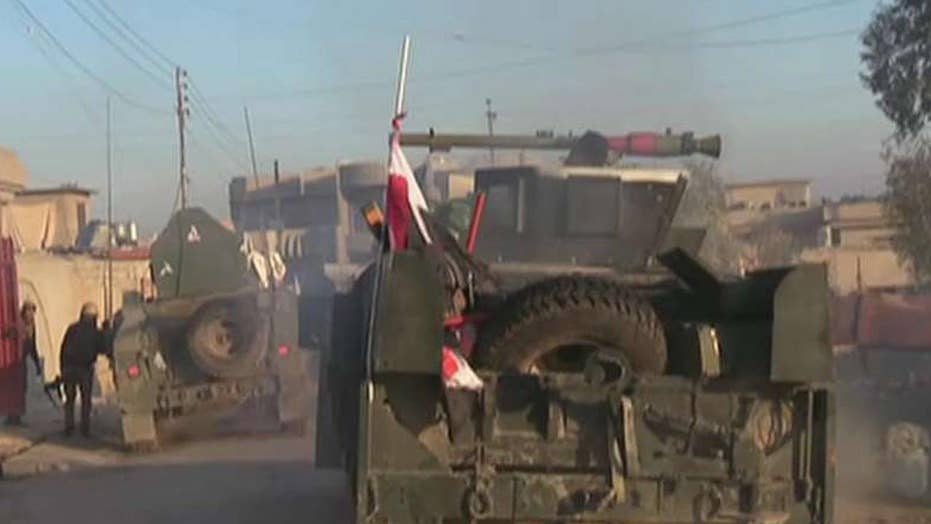 On the ground with Iraq's most elite forces in Mosul

Lt. Col. Mitchell Utterback opens up on his experience on 'Happening Now'

Al-Maturi said it is now "under their full control."

Al-Maturi said at least 10 suicide car bombs were deployed by ISIS militants. Nine of the car bombs were blown up before reaching their targets. The tenth killed two policemen and wounded five.

Al-Maturi also said his forces arrested two militants — an Iraqi and a foreigner who speaks Russian.

"The neighborhood is fully liberated," he said. "We are clearing it up and beefing up fortifications."

Up to 3,000 people fled from the Mamun neighborhood Sunday morning, according to Iraqi special forces Brig. Gen. Salam Hashed, who oversees a screening center south of Mosul. Hashed said just over 2,500 people fled the previous day.

According to the U.N. figures, about 750,000 civilians are believed to be trapped in their houses in western Mosul, one of several challenges expected to slow the advance of the Iraqi troops.

Another complication is western Mosul's old and narrow streets, which will force Iraqi soldiers to leave the relative safety of their armored vehicles.

Western Mosul is the last significant urban area IS holds in Iraq. The city is split roughly in half by the Tigris River.

Mosul fell to ISIS in the summer of 2014, along with large swaths of northern and western Iraq.