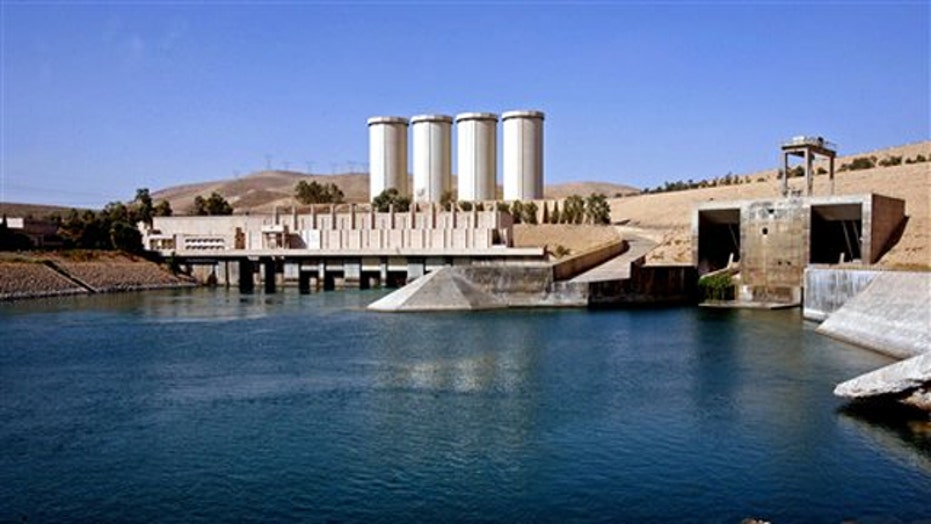 Kurdish forces have launched a ground offensive to seize control of Iraq's strategic Mosul dam from Islamic militants, as U.S. airstrikes continued for a third day.

The dam, which supplies water and electricity to northern Iraq, was seized on August 7 by the Islamic State, the militant group formerly known as ISIS.

An Iraqi security official told The Associated Press that Kurdish forces have taken over parts of the dam.

Gen. Tawfik Desty, a commander with the Kurdish forces at the dam, said they now control the eastern part of the dam and that fighting is still underway.

Defense sources told Fox News that a "lengthy, multi-phase operation" is expected to retake the dam and it began Saturday morning local time.

The ground operation is being carried out with Iraqi army cooperation and is being billed as a joint Kurdish-Iraqi-US operation, sources said.

A high-level Kurdish official in the Mosul area told Fox News that Peshmerga fighters have taken the town of Teleskof inside ISIS-held area in northern Iraq as well as a few other surrounding villages Sunday.

U.S. Central Command said Saturday that a mix of U.S. fighter and remotely-piloted aircraft executed nine strikes as part of its humanitarian efforts in Iraq and to protect American personnel and facilities.

A senior U.S. official told Fox News early Saturday that the strikes were to protect Iraq’s critical infrastructure and that the U.S. executed them at the request of the Iraqi government, which thinks Islamic State forces can no longer maintain the dam. If the dam should fail, up to 12 feet of flooding at the U.S. Embassy and the major cities of Baghdad and Mosul could occur, officials say.

The Kurdish offensive against the dam came amid reports of another massacre by Islamic State militants.

A senior U.S. defense official told Fox News that U.S. surveillance drones saw evidence of the massacre of dozens of Yazidi men. The U.S. military later struck two militant targets, killing some of those involved in the killings, the source said.

The U.S. military said in a statement Friday that the U.S. forces conducted the air strikes on Islamic State vehicles in the village of Kawju. The village is located south of the village of Sinjar.

The Yazidis, a Kurdish-speaking ethnic and religious group which numbers in the hundreds of thousands in Iraq, has been persecuted in the north by Islamic State militants, with at least 500 killed prior to Friday's news, according to Iraq's human rights minister.

Sources told Fox News it appears residents in the village did not comply with the militants' demands to convert to Islam.

"[Militants] arrived in vehicles and they started their killing this afternoon,'' senior Kurdish official Hoshiyar Zebari told Reuters. "We believe it's because of their creed: convert or be killed."

A Yazidi lawmaker and another senior Kurdish official also said the killings had taken place and that the women of the village were kidnapped.

The latest killings came just a day after President Obama said U.S.-led air strikes had broken the siege by the militants against the minorities trapped on a mountain in northern Iraq. Obama made it clear the U.S. mission in the region is not over yet.

"We have striking evidence obtained from Yazidis fleeing Sinjar and some who escaped death, and also crime scene images that show indisputably that the gangs of the Islamic States have executed at least 500 Yazidis after seizing Sinjar," Sudani told Reuters Sunday.

Sinjar is the ancient home of the Yazidis, but also one of several towns captured by the Sunni militants who view the community as "devil worshipers" and demand conversion to Islam under threat of death.

The Islamic State, which has declared a Sharia state caliphate in parts of Iraq and Syria, forced tens of thousands of Yazidis and Christians to flee their homes or face certain death.

The Yazidis, followers of an ancient religion derived from Zoroastrianism, are spread over northern Iraq and are part of the country's Kurdish minority.

Fox News' Greg Palkot and Jennifer Griffin, Reuters and The Associated Press contributed to this report.